The Wire Troll: Jaime Garcia is Back in the Win Column 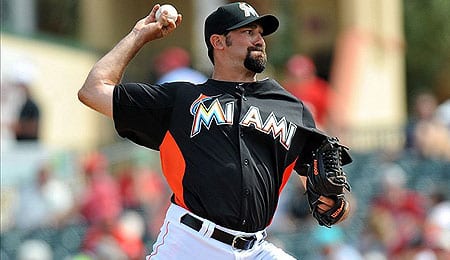 Welcome back to another week of Fantasy baseball waiver wire recommendation, Wire Troll style. Tim is unavailable this week, so the Troll falls to your trusty editor’s hands. So while you wonder what new coach Manny Ramirez will instil in the Cubs batting prospects, let’s get to this week’s picks.

Jaime Garcia, SP, St. Louis Cardinals (ESPN: 9 per cent; CBS: 37 per cent): On our Podcast just a couple of weeks ago, Josh identified Garcia as someone to watch. Good call. On Saturday, the southpaw earned his first win in over a year as he proves that his shoulder is finally sound. Other than a couple of homers, Garcia looked solid in his first outing as well, getting robbed of the W when Trevor Rosenthal blew the save. Garcia may never be the picture of health again, but grab him in NL-only leagues while he’s rolling. At the very least, he’s still capable of inspiring hatred (see video below).

Lonnie Chisenhall, 3B, Cleveland Indians (ESPN: 10.8 per cent; CBS: 29 per cent): Slotted 36th in our preseason Third Base Rankings, Chisenhall has vastly outperformed our projections to the point where he is now a superb backup third baseman and perhaps even a starter in some leagues. Certainly, he makes an excellent pickup for distraught Nolan Arenado owners. A couple of weeks ago, Chisenhall enjoyed a rare five-hit game, and while he’s still battling Carlos Santana for PT at the hot corner, he’s been seeing time in the clean-up slot. Chisenhall is enjoying a career year (already setting a new personal high in WAR), but has particularly raked in May (.397/.465/.619).

Chris Hatcher, RP, Miami Marlins (ESPN: unowned; CBS: unowned: Early last season we wondered if Hatcher had an opportunity to grab a Fantasy friendly role with the Fish. Well, he’s just been recalled and with the team struggling to build a bridge between the starters and closer Steve Cishek, he once again has a chance to carve out a useful role. The righty with the fantastic ‘stache struggled in his brief time in Miami last year, but he hurled two shutout frames with three Ks in his season debut. Hatcher has proved he’s a workhorse closer at Triple-A, so if you’re in a deep NL-only league that tracks holds, consider taking a flier here.

Ben Revere, OF, Philadelphia Phillies (ESPN: 45.5 per cent; CBS: 42 per cent): Heading into the season, we slotted Revere just outside the top 50 in our Outfield Rankings. Well, he’s slightly outplayed that, likely coming in around top 45 so far, yet he remains available in over half of ESPN and CBS leagues. The Phillies lead-off man the last two games is a bit below pace for his stated goal of 50 to 60 steals, but he’s managed to raise his BA 23 points in the last two games (including a 4-for-4, three-run gem on Saturday) — something that should help him from losing any more PT in centre field.

David Buchanan, SP, Philadelphia Philles (ESPN: unowned; CBS: 2 per cent): Back on a mid-March Podcast, we sarcastically suggested that having Buchanan battling for the fifth starter job in Philly wasn’t exactly worth getting excited over. Well, now he’s been recalled with Cliff Lee (elbow) out indefinitely — a bit surprising since Buchanan was rocked in his last start at Triple-A. Still, the 25-year-old looked like he belonged on Saturday, tossing an effective five-inning outing for the win. Buchanan has bought himself some rope while Lee heals, so give him a look in deeper NL-only leagues. He’s proven he can win at Triple-A, and now has his first MLB win under his belt as well.

Mark Reynolds, 1B/3B, Milwaukee Brewers (ESPN: 15.6 per cent; CBS: 34 per cent): Last month, we suggested Reynolds might be a decent replacement for Mike Napoli owners. Well, we’re back to recommend Reynolds again, this time based on his recent play. He smoked a pair of two-run dingers Friday and has gone 6-for-17 over the last five games to end a drought. Reynolds’s walk rate is down, but who cares? He’s fifth in the NL in homers, and that’s what you’re picking him up for.

Juan Carlos Oviedo, RP, Tampa Bay Rays (ESPN: 0.2 per cent; CBS: 2 per cent): Grant Balfour blew the save Thursday and has struggled with wildness all season. Meanwhile, Oviedo (who accumulated plenty of closing experience when he was known as Leo Nunez) has been untouchable in May. In a scoreless game in the ninth on Friday, Ovideo — not Balfour — got the call. Watch this one.

Maikel Franco, 3B, Philadelphia Phillies (ESPN: unowned; CBS: 20 per cent): With Cody Asche on the DL, Philly is thinking about recalling top prospect Franco. After struggling in April, Franco has really turned it on this month.

Ryan Vogelsong, SP, San Francisco Giants (ESPN: 25.5 per cent; CBS: 46 per cent): Over the last month, Vogelsong has tossed quality starts in five of his six tries. He’s given up just six earned runs total over this stretch, and four of those came in one start.

Mitch Moreland, 1B, Texas Rangers (ESPN: 2.4 per cent; CBS: 25 per cent): Moreland, along with Michael Choice, are the players that most benefit from Prince Fielder’s upcoming season-ending neck surgery. Moreland will pretty much play every day at first base and on Saturday, he was hitting in three-hole as Texas toys with its lineup without the big man.

B.J. Upton, OF, Atlanta Braves (ESPN: 40 per cent; CBS: 30 per cent): Upton is 5-for-10 with three runs, a double, a homer and a steal in the last three games. Massive disappointment? Yes. Massive upside? Yes.

Juan Nicasio, SP, Colorado Rockies (ESPN: 3.6 per cent; CBS: 20 per cent): Nicasio has managed to win five times in 10 starts, and in his last five starts, he’s only given up more than two earned runs once.