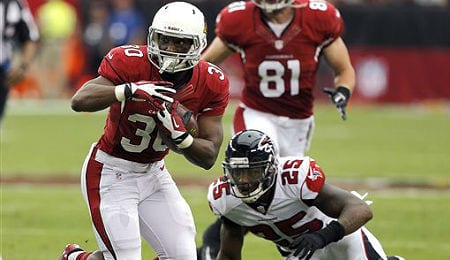 For those of you not yet crestfallen, championship weekend brings along two very different emotions. Feelings of aspiration are often punctured by needles of anticipation. Now that the bye weeks are firmly underneath the frolicking early snowflakes, we dig ever so deeper into the player mass.

Blake Bortles, Jacksonville Jaguars (CBS: 15 per cent; Yahoo: 7 per cent): After Bortles’ many INTs, those with slightly better options might be cutting ties. Jacksonville is bad but can it truly get any worse? Bortles is not Blaine Gabbert, because he can actually move in the pocket. The future is worth the gamble. Weapons are in place and time is not of the essence. Bortles and the Jags can suffer through another bad season and he can still improve as QB. Nab him now in dynasty formats and save yourself a sock full of quarters later. So you might slam that sock fearlessly against a brick wall. Or, you might not and your patience will reap middle of the pack results.

Stepfan Taylor, Arizona Cardinals (CBS: 18 per cent; Yahoo: 6 per cent): Taylor owners have endured a frustrating season. As Andre Ellington injuries mounted, Taylor scored a TD here and there (including a big performance in Week Seven — see his reaction to that game in the video below), but ‘Zona refused to give him even double digits carries in all but two games. Hence Taylor is available more than he should be. If given a true shot, he could excel. It was unsettling to see scout-teamer Kerwynn Williams get the opportunity ahead of Taylor when Ellington finally missed a game. We heard the cries and saw many cutting ties with Taylor. Again he is available and his little bit of experience intrigues us.

Rod Streater, Oakland Raiders (CBS: 10 per cent; Yahoo: 1 per cent): Here is a talented player who essentially lost this season due to injury. Streater entered the NFL with little promise, yet he has shown his Fantasy worth on a very bad team. Now Oakland has Derek Carr and while Streater (thanks to being hurt) may not have had enough time to develop a rapport with Carr, there is certainly an entire offseason to do so. Dynasty depth is a very good thing and Streater’s career is far from over. Okay, so his season is officially over, but that just means you can get him for next to nothing.

Jarius Wright, Minnesota Vikings (CBS: 2 per cent; Yahoo: 1 per cent): In the bigger, stronger, faster NFL, Wright is not a physical giant. He is more of a Percy Harvin clone than his teammate Cordarrelle Patterson, who the Vikes still believe is their savior. Wright’s willingness and offensive understanding should be why he will continue to get better. The rise of fellow WR Charles Johnson and the threat of Patterson on the same the field leaves the future very open for Wright. Greg Jennings has three more years left on his contract after this season but if Wright continues to develop and make a difference, Jennings could be cut loose.

Cole Beasley, Dallas Cowboys (CBS: 7 per cent; Yahoo: 2 per cent): Born and bred Texan Beasley is just finishing up his third season. While we held out hope that rookie Devin Street could be a stealthy slot WR, it was Beasley who came through when Dallas needed him. There is no reason to think Beasley can’t turn in to a Danny Amendola or Dokie Williams circa 1985-86 type of player.

Eric Ebron, Detroit Lions (CBS: 25 per cent; Yahoo: 3 per cent): So we got a little over-zealous this summer while we dreamed of Ebron making a push for 1,000 yards receiving as rookie. The health of Calvin Johnson unfortunately dictated Ebron’s overall production. When Megatron missed time, Ebron was placed in pressure situations and he did not respond well. We think that’s been a learning experience, as we still think Ebron is destined for greatness. Some impatient owners have shrugged their shoulders and cut him free. The market price is grounding, but the potential remains sky high.

Jace Amaro, New York Jets (CBS: 10 per cent; Yahoo: 3 per cent): If some lunatic in your dynasty league has dropped Amaro, you’d better claim him and then slap that crazy in the face with your future winnings. It took Amaro a few drops early but his vacuum-like tendencies are mirroring that of his college days. The QB situation is frankly smellier than a port-a-potty at a chili cook-off, but we all know what a safety valve a TE can be. Whomever is under centre next season should realize the range and athleticism Amaro brings to the offense.

Now it’s your turn. Let us know in the comments below who your favourite Fantasy football pick of the week is.

No, we don’t mean changing rules that give even more advantages to quarterbacks and receivers.

Quarterback plays well, leads team to playoffs and gets a big contract. Same quarterback leads team to a disappointing effort and underperforms the next year. Heard this one before? Filling the role in ’08 was Garrard, who posted 15 touchdowns to 13 interceptions.