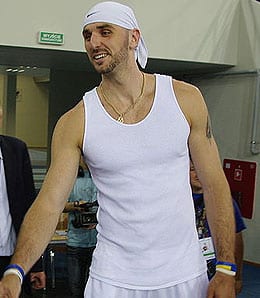 Marcin Gortat and his wife beater have arrived in Phoenix.

Happy Holidays to all of the Troll’s readers. With Buck taking Christmas Day off (bah! humbug), RotoRob again takes controls of your favourite Fantasy basketball waiver wire advice column. This is a quiet time for most people as they are consumed by family events, so smart Fantasy owners will take advantage, because you can bet your life that your league’s waiver wire remains mostly quiet as well – meaning if you can sneak away from your family for a few minutes, you’ll have a real advantage in being able to pillage the wire virtually unchallenged.

Marcin Gortat, C, Phoenix Suns: The Suns desperately need a big rebounder, and the arrival of Gortat from Orlando in the Jason Richardson/Hedo Turkoglu trade may provide just that. He’s shown flashes of Fantasy value whenever Dwight Howard has missed time, and let’s be clear: Robin Lopez isn’t awful, but he’s not a quality starting centre, so it’s just a matter of time before Gortat takes his job. Gortat got 18 minutes off the bench in his Phoenix debut, and that number is sure to rise as he gets acclimated with the Sun system, an offense in which Steve Nash can make centres look quite good. Fantasy owners that have been dying to see what Gortat can do with some serious minutes are finally going to get their wish, and here’s betting the results will be very sweet. Pick him up in standard-sized leagues or larger immediately.

J.J. Hickson, Cleveland Cavaliers: Hickson lost his job to Antawn Jamison a while back and he really got buried on the Cavs’ bench, but he’s been showing signs of life lately, making him a nice selection for deeper leagues and a great roster stash for those that have space in standard leagues because of his massive upside. Just note that Hickson will remain inconsistent as long as he’s coming off the bench, but at some point the Cavs are probably going to deal away some vets, clearing some space for this talented enigma. Monday’s near double-double in just 22 minutes showed what he’s capable of, but the roller coaster continued on Wednesday night when he did next to nothing in just 15 minutes of burn. Like I said, he’s going to be inconsistent, but if you have space and patience, I like Hickson’s long-term prognosis.

Jeff Foster, Indiana Pacers: The old guy’s been starting while Josh McRoberts was out, and after putting up 11 boards and four blocks on Monday, he’s worth a look in deeper leagues for owners that need big man stats. Note that Foster could be dealt, and if so, he’d likely wind up buried on another team’s bench, so this is definitely not a long-term solution by any stretch.

Jared Dudley, Phoenix Suns: Vince Carter is now in Phoenix, but his knee is acting up to the point where he needed an MRI and was apparently considering surgery. That plan has been nixed for now, but it’s clear that VC is a major risk. And that opens the door for Dudley, who exploded for a career-high 27 points in a start Monday and then consolidated that with 33 points, 12 boards, seven 3-pointers and three steals on Thursday. Woah. He’ll only be a short-term option, but these games proved that should Vinsanity shut it down, Dudley becomes a must-own commodity.

Brandon Bass, Orlando Magic: Bass moved into the Magic starting lineup recently (although he came off the bench Tuesday in favour of newcomer Turkoglu, with J.J. Redick getting the start at SG). But don’t worry – Orlando has some tinkering to do with its new lineup, but Bass is clearly the best option at PF, and he’ll get his minutes as he did on Thursday when he returned to the starting lineup and put up 17 points and six boards. Double-doubles are in store for Fantasy owners going Bass fishing.

Kenyon Martin, Denver Nuggets: Attention K-Mart shoppers! He’s back, after missing all season thanks to knee surgery, and Martin has immediately taken over the starting PF slot, so you need to move on him pronto. He’s still capable of putting up double-doubles, and you can also expect a block and steal per game as his minutes rise. And if and when Carmelo Anthony gets dealt, Martin could be in line for more touches.

Keyon Dooling/Earl Boykins, Milwaukee Bucks: With Brandon Jennings out for up to a month and half with a broken bone in his foot, Dooling and Boykins will share the PG duties in Milwaukee. If you need dimes, pick up Dooling; if you need points, go for Boykins, but beware of the dreaded time share. If one of these two surges ahead, he’ll be able to provide decent low-level Fantasy value. For what it’s worth, Dooling got major burn (43 minutes) on Thursday, but Boykins still got 29 minutes of action as he shared the backcourt with him for long stretches. If that trend continues, they will both be useful assets for the next few weeks.

J.J. Redick, Orlando Magic: Vince Carter is gone, and the Magic is toying with Redick as the starting two guard, starting him on Tuesday as the team went small, but then bringing him back off the bench on Thursday. Whether Orlando is simply showcasing him for a trade (as rumoured) or giving him a legitimate shot to produce, the result is the same for Fantasy owners – Redick needs to picked up. In his start on Tuesday, he went off for 21 points, canning four treys and then he nailed five trifectas on Thursday. Unfortunately, that’s about all he supplies – points and 3-pointers, but if you need help in those areas, Redick could provide a nice boost in the short-term (or maybe longer, depending on how things play out).

James Harden, Oklahoma City Thunder: After a slow start, Harden looks like he’s finally settled in as the Thunder’s sixth man, reaching double digits points in six straight games. He wasn’t getting many touches early in the year, but as the season has progressed, Harden has become a bigger part of the offense, yet he still owned in just over a quarter of Yahoo! leagues. In addition to scoring, Harden will provide you with 3-balls and steals, so give him a look and see if he fits your team.

By RotoRob
Tags: J.J. Hickson
Posted in BASKETBALL, RotoRob, The Wire Troll | Comments Off on The Wire Troll: Good Times for J.J.?