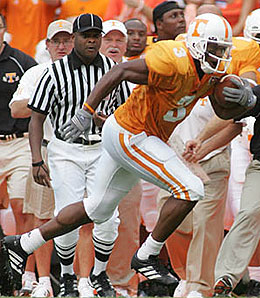 Rookie Robert Meachem may have a bright future in the NFL, but he better get past his propensity to get hurt first.

The year was 1987. Glenn Anderson ruined my first viewing experience of a hockey game on television; Hulk Hogan shook the world by slamming Andre the Giant at Wrestlemania III; the Beastie Boys were all the rage; the Giants ruled the NFL roost and I was a scrawny third grader who collected baseball cards. I loved the Topps 1987 baseball stock and the razorblade sharp gum that always came with the pack. However, there was one minor problem. I kept getting repeats of Yankees shortstop Bobby Meacham. This guy haunted my dreams because every other pack I would buy contained his likeness. I think at one point I owned 15 of his cards. Ten years later, the name makes its return to haunt me again, albeit with a slight variation on the spelling.

WR Robert Meachem (he doesn’t like to be called Bobby, I take it), the Saints first round selection, brings solid hands and playmaking ability to an explosive, but yet very young group of receivers in the Big Easy. Note that the former Tennessee Vol may enter training camp with the tag of being injury prone. His early days as a Saint featured an ankle injury during the team’s first minicamp, and most recently he damaged the medial meniscus cartilage in his right knee. Meachem is expected to be sidelined for four-to-six weeks.

Rookie wide receivers typically struggle to adjust to the NFL game considering they don’t face too many tomato cans at cornerback as they would most Saturdays in college. If Meachem can’t shake the injuries, he’ll struggle to handle the speed of the game and make an impact with an already talented receiving corps. From last year’s rags to riches story, Marques Colston and Devery Henderson comprise a respectable one-two punch. During the offseason, the Saints also added veteran wideout David Patten to the mix, a member of the dreaded 2001 Patriots. With the Saints already armed with Colston, Henderson, Reggie Bush and new tight end Eric Johnson, it seems like Meachem’s chances will be at a premium.

This holds true especially if he cannot get on the field because of constant injuries. We know one thing about the Saints during the Sean Payton era: They have no problem restricting the playing time of oft-injured receivers. Just ask Donte Stallworth, who earned a one-way ticket out of town due to numerous hamstring issues.

Meachem showed at Tennessee that he can be a consistent threat. He ranked fourth in the nation last season in yards receiving per game with 99.8. Yet, he needs time to gel with the offense to be the player the Saints desire. Ultimately, Meachem must get healthy and stand out among one of the league’s best offenses.

Because of the team’s explosive offense, he’ll get looks, but do not expect an Anquan Boldin-esque rookie campaign. There are too many cooks in this kitchen for Meachem to be a significant player in Year One. He may have a bright future, but he’ll have to turn some heads in New Orleans to become a contributor.

Don’t expect Meachem to be a significant fantasy factor in his first season.