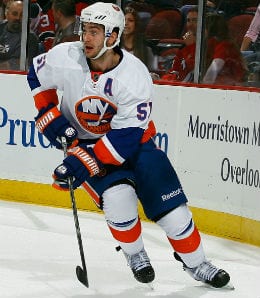 Frans Nielsen has helped the Isles to a fantastic start. (Flamesnation.ca)

Frans Nielsen, C, New York Islanders (ESPN: 42 per cent; CBS: 41 per cent): Nielsen, like his team, is off to a great start. In eight games, the Herning, Denmark native has four goals (including a hat trick against the Stars — see video below), eight points, a plus-4 rating, three power play points, a game-winning goal, 25 shots on goal, 63 face-offs won, five hits and seven blocked shots. Nielsen has proven himself to be very valuable in many different aspects.

As of this writing, Yahoo! Fantasy hockey owners may have an even greater chance of snatching him off the waiver wire as he’s owned in just 20 per cent of leagues. Our recommendation? Pick Nielsen up; you just won’t be able to do so in any league with us — sorry, we beat you to it.

Kris Russell, D, Calgary Flames (ESPN: 16.4 per cent; CBS: 23 per cent): Only two defensemen were better than Russell in Week Two. In three games, he had four assists, a plus-2 rating, a power play assist, six shots on goal, a hit and five blocked shots. For a team expected to be in the Connor McDavid/Jack Eichel Sweepstakes, the Flames have come out of the gate with a vengeance. Russell has been a key part of it and logs more than 20 minutes per game. This could be a big season for him, his Fantasy owners and Calgary.

Nikita Kucherov, RW, Tampa Bay Lightning (ESPN: 3.9 per cent; CBS: 36 per cent): The Lightning is for real this season, and youngsters like Kucherov, Vladislav Namestnikov and Jonathan Drouin are going to be a big reason why. In Week Two, Kucherov collected a goal, three assists, a plus-2 rating, a power play point, nine shots on goal, a hit and a block. He’s got six points in nine games so far, and he’s only going to add more. We’d also recommend you keep a close eye on Drouin; we’re just waiting for a larger sample size first.

strong>Damien Brunner, RW, New Jersey Devils (ESPN: 0.4 per cent; CBS: 8 per cent): Brunner has played just four games this season, but he’s got three points (on goal, two assists), a plus-1 rating, two power play points, seven shots on goal, a hit and a blocked shot. Will he get back to his Detroit Red Wings form of 2012-13 or will he fizzle out like he did last season? It’s too early to say, but he may be a solid pick up in the time being.

“Studs and Duds” is our weekly segment on who was hot and who was not in Fantasy hockey’s week previous. This week, we’re talking Week Two.

No. 1. Jonathan Quick, G, Los Angeles Kings: Minnesota’s Darcy Kuemper is still on an impressive roll, but he was no match this week for the Kings’ Quick. In two games, The City of Angels’ main puck stopper collected two wins, a 0.50 goals against average, a .986 save percentage and a shutout.

No. 2. Keith Yandle, D, Arizona Coyotes: It’s hard for a defenseman to have a better week than Yandle did. In three games, the Coyotes’ assistant captain scored a goal with three assists, two penalty minutes, four power play points, 19 shots on goal and four blocked shots.

No. 3. Jonas Hiller, G, Calgary Flames: Like Quick, Hiller collected two wins, a 0.50 goals against average and a shutout, but he faced a few less shots, notching a .980 save percentage.

No. 1. Tomas Hertl, LW, San Jose Sharks: It looks like “Hertl-power” is in need of a boost. In three games with the Sharks, the young Czech had no points, a negative-5 rating, two penalty minutes, three shots on goal and seven hits.

No. 2. Alexander Semin, LW/RW, Carolina Hurricanes: Semin has been a major disappointment for the Hurricanes. He has just two assists on the season, and none in the past three games. In those games, the former 13th overall pick has a minus-4 rating, five shots on goal and three hits.

No. 3. Justin Faulk, D, Carolina Hurricanes: The ‘Canes have played seven games and have yet to win. Coincidentally, Faulk’s plus-minus rating for the past three games also has a seven — a minus-7, that is. In addition to that abysmal rating, the South St. Paul, Minn. native added just one assist, four penalty minutes, five shots on goal, three hits and three blocked shots.

And that’s our coverage of Week Two. Now it’s your turn. Tell us in the comments below how we did or what players made or broke your week in Fantasy hockey.