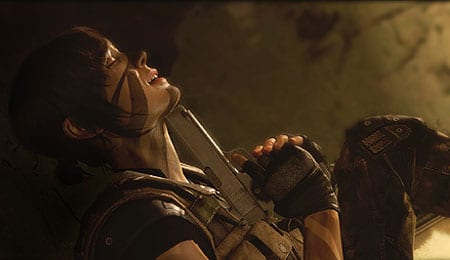 Yeah, she ain’t pulling the trigger.

Outside of the game’s deliberate and contrived deception surrounding the identity of the serial killer, I really enjoyed Heavy Rain. I found it be an interesting departure from the norm, and, as such, I was pretty psyched to see what Quantic Dream had in store for us with Beyond: Two Souls, the studio’s Ellen Page-driven follow up. How did it hold up? Press ‘X’ to read.

As with Heavy Rain, Beyond is more “interactive drama” than game as you don’t play it in the traditional sense. Much of the game consists of you walking from Point A to Point B and flicking the right analog stick to trigger some pre-rendered action. You’ll also be holding down and/or repeatedly pressing face buttons and moving the controller itself according to on-screen prompts. It works fine, but there were plenty of times when it felt completely inconsequential — essentially the gaming version of turning the page in a book.

While those sections could be classified as dull, the action segments just don’t work very well. In theory it should function smoothly as all you’re asked to do is move the right stick in a direction corresponding to the action when the screen slows. For example, if you’re delivering a kick at an enemy on the left side of the screen you move the analog stick left to connect. Unfortunately, a large number of actions take place in an ambiguous position, causing you to essentially guess which directional input is needed.

I’d estimate 95 per cent of my failed actions were based on that, which under most circumstances would be infuriating. Here, however, it tops out at annoying because the game won’t allow you to fail. Instead it simply tweaks the narrative a little. The story soldiers on.

Things are also dicey when controlling the game’s resident poltergeist, Aiden. You toggle between Jodie (Page) and Aiden with the triangle button, which sends you into a shadowy variant of the world. Once there, you are able to manipulate objects and people. Moving Aiden feels very loose, and the repetitive act of holding down a shoulder button in conjunction with the sticks wears out its welcome.

Easily the best part of Beyond: Two Souls is the presentation. Quantic Dream has gone John Hammond (spared no expense) to make it one of the best looking and sounding console games I’ve seen. Visually, the facial rendering is exceptional with a range of emotions on full display as characters react believably to the circumstances around them. The settings are impressive as well, ranging from the simplicity of a lab where Jodie is studied to the chaos of a warzone. Granted, you’re given almost no chance to explore beyond small, designated areas, but at least that confinement equates to high-quality detail.

There are a couple hitches that need to be addressed, however, starting with the bizarre, mechanical way these otherwise lifelike character models move. Part of it stems from what seems to be perpetual, subtle adjustments from the camera to nudge you in the right direction. Whether that’s actually the culprit or not, it’s some of the most unnatural walking since early Resident Evil games. Texture pop in and lengthy load times also happen a fair amount.

One area in which Two Souls trumps Heavy Rain is in the voice acting. Page authors a strong performance as Jodie, and it’s her delivery that elevates some of the middling dialogue and helps create a bond between you and the character. Willem Dafoe lends his acting chops throughout the story as well, serving as Jodie’s doctor/caretaker. He’s very good in the role and seemed underutilized. Lastly, the soundtrack is probably the high point of the entire game with the music consistently setting the proper mood for scenes. It can be a little heavy handed at times, but overall it’s excellent.

A story first and a game second, Beyond: Two Souls follows the life of Jodie, who has mysteriously been tethered to a creature from another world (Aiden) since childhood. Writer/director David Cage has elected to tell the story in non-chronological order, skipping from one part of Jodie’s life to another in a style reminiscent of Pulp Fiction. It’s a bold choice, but one that ultimately serves to muddy the narrative and reduce the story arc into a collection of compartmentalized moments.

Nowhere is this more apparent than when the game tries to awkwardly shoehorn a love story into the mix involving Jodie and Ryan Clayton, your C.I.A. handler. One moment we see Clayton taking Jodie against her will from the care of Nathan Dawkins (Dafoe), and the next she’s sheepishly inviting him over for dinner. Jodie explains to a jealous Aiden all of Ryan’s virtues, which is supposed to serve as all the motivation we need. In a game built around the story we shouldn’t be told why we care about someone, we should be shown. Instead, we see this man’s questionable character in multiple scenes… oh, but P.S., Jodie sort of digs him.

Occasionally two segments will connect nicely with one another, but even when viewed as a whole the approach just doesn’t work — and the in-game reasoning for it is flimsy at best. Without cohesion, Two Souls becomes little more than a series of hits (Hunted, Like Other Girls, Navajo) and misses (The Party, Alone, My Imaginary Friend). Some sections are very enjoyable, while others are just monotonous. And lest you think I can’t appreciate a slow burn, I’m by no means someone that demands constant action, but when the ebbs and flows feel arbitrary it hurts the narrative.

While the story has its issues, it’s undeniably stronger than the actual gameplay. As noted, a lot of your time is spent simply doing a basic action with the controller and watching. When the game is more aggressive in engaging the player, however, its faults become apparent. That’s because the gameplay is maddeningly restrictive, and those restrictions serve to directly undermine the main thrust of the story.

Throughout Beyond: Two Souls, Jodie is desired by the C.I.A. and others for her symbiotic relationship with Aiden, who all but makes her invincible based on his abilities — he can possess people, move objects, create an impenetrable shield, heal wounds and more. Sounds cool, right?

Unfortunately most encounters are essentially scripted, so you’re pigeonholed into handling them exactly how the game wants you to. When controlling Aiden only enemies that are red can be choked or possessed, and only objects with little dots on them can be moved. Why pair the player with a supernatural ass kicking machine and then completely remove the option of how to use them? Beyond offers only the illusion of choice. It’s like connecting dots and ending up with a beautiful picture — sure, technically you “drew” it, but in reality you had no influence on what was created.

As frustrating as some elements can be, when the game gets it right it’s damned impressive, and the heavily choreographed nature of it allows for the type of memorable set pieces you simply don’t get in more traditional games. Yes, you have to sacrifice a lot of control to experience them, but when things click you may find you just don’t care.

Despite being hamstrung by pacing issues, frustrating limitations and some logic gaps, Beyond: Two Souls is worth “playing” at least once. Its high production values and memorable encounters should be experienced, and they’re likely to stick with you for a while. Only make sure you’ve accepted the fact that Quantic Dream is driving this story, and you’re just along for the ride.