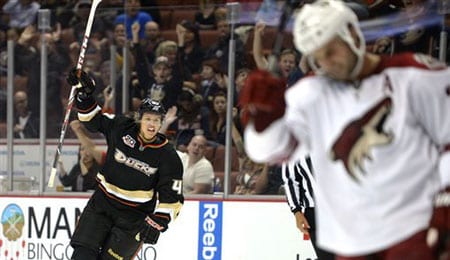 Undaunted, we bring forth a light edition of that Wire Troll thing the fantasy hockey fans crave. May you find something this week that gives your team some benefit. Let’s take that search once again.

Kevin Poulin, G, New York Islanders: We love to put our necks out there and Poulin, ranked in our top 35 heading into the 2013 season, is just one of those temporary fixes that could at least get a couple wins for your Fantasy team. While Evgeni Nabokov is still out with that persistent groin injury and the Islanders are winning, Poulin is at the very least a decent alternative in leagues in which goalies are few and far between. He’s capable of making some big saves (as you can see in the video below), but be aware that one or zero goals allowed is something that will not happen too often for any Islanders netminder.

Hampus Lindholm, D, Anaheim Ducks: People kind of chuckle, but Lindholm can produce a little bit of offense without looking like a complete dumpster figure that will ultimately look bad. So .13 points is not much to write home about; what is, is the fact that the Ducks defenseman is getting more and more acclimated to the sub freezing weather. The talent is there but the stamina isn’t always. Just keep that in mind with again, the low ownership rates.

Jamie McBain, D, Buffalo Sabres: Nobody owns me! That is a familiar refrain heard coming from the mouth of McBain. The 25-year-old does have Fantasy upside, but it has to be tempered with the fact that he plays for Buffalo. If you are looking for that final depth defenseman and the pickings are very slim, then McBain may just be your guy. After all, you went this deep into the waiver wire, therefore, a potential for slight reward can be had.

Boone Jenner, C/RW, Columbus Blue Jackets: Again, this is another jury-is-still-out-but-has-potential type of player. The three goals in the last two games indicates that there is upside but the low point total for the season does raise some pretty big red flags. When you are this low down the waiver wire, heck, anything might look good. Jenner does have unquestioned intangibles, but can he parlay these into becoming a serviceable second or third line option? Time will tell.

Eric Fehr, RW, Washington Capitals: Why should you take a shot with Fehr as a bench player? Simple. Because he occasionally gets playing with a double shifted Alex Ovechkin and that can help anyone. He is owned in less than five per cent of all Fantasy leagues, yet has 19 points in 35 games. The average time on ice is a hair less than 15 minutes, but Fehr does average a bit more two shots per game. Power play time is also rather rare but occasionally it is there. You can fair much worse than Fehr on the waiver wire, so keep that in mind.

That is all for now. Thanks again for reading this week and good luck in your leagues. If you have any questions, fire away on Twitter @ChrisWasselTHW.