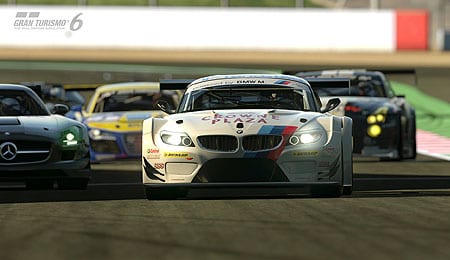 It’s no secret that racing games and us aren’t the best of friends. That’s not to say we haven’t enjoyed some of them over the years, however, including the earlier Gran Turismo titles. More than three years have passed since Sony’s acclaimed racing series got a new installment, but that changed in December with the release of Gran Turismo 6. That means it’s time to get behind the wheel and see what this bad boy has under the hood.

Without question, the area in which GT6 excels is the actual driving. As much a simulation as it is a game, Gran Turismo 6 handles beautifully. Not only that, but it’s laid out in such a way that it’s consistently helping you develop your skills on the track. Early on we stumbled through victories, essentially beating the computer because we could afford a faster vehicle. The more we played, though, the better we got at knowing when to accelerate, when to brake, how to corner, and lots of other subtleties.

We’re sure longtime fans will find their groove much quicker, but we thought the layout and progression of the racing circuits was exceptionally well done. We never felt like the game was robbing us of well-deserved victories. Instead, we knew we needed to get better and/or purchase better equipment. It’s also worth noting how different the various cars handle… and given the vast number of available models this really helps give the game some added variety.

Although it may lack the polish that the Xbox One’s power afforded Forza 5, Gran Turismo 6 needn’t make any apologies in the graphical department. The various cars look generally excellent — though some didn’t seem to receive the same amount of TLC — and the post-race replays really highlight this with their dynamic camera angles. There’s a lot of diversity to be found in the game’s extensive catalog of tracks as well, with various lighting and weather effects looking sharp.

Easily the biggest weakness visually is the lack of damage done to the cars from collisions. We lost control more times than we’d care to admit, but the results of smashing into a wall at upwards of 100 mph just weren’t at all realistic. And while the A.I. does a good job of staying out of multi-car pileups, there were plenty of occasions when we traded paint on a hairpin only to see zero evidence of it. We assume this was a design decision used to discourage players from turning races into demolition derbies — nonetheless, in a game in which realism is important it represents a significant departure.

Things are seriously underwhelming on the audio side, whether you’re talking about the completely generic, forgettable soundtrack or the muted sounds of the cars. It’s not terrible… it’s just sort of there. On the plus side you can pipe in your own tunes via a custom soundtrack, but there’s nothing you can do about the lack of punch in revving engines and screeching tires.

Everything in Gran Turismo 6 revolves around the extensive career mode. You start off small, with one car and access to just one racing circuit, but earn credits with each race. As you pile up the wins, and the stars that go along with it, you’ll gain access to more cars and more challenging circuits. From that very simple formula spawns a ton of content with more than 1,000 cars to unlock and modify, and loads of tracks to race against A.I. or human drivers. If that’s what you want out of a racing game, GT6 has it.

Our problem with the career mode is that everything sort of happens in a vacuum. There are no cut scenes to chronicle your rise, no emergence of rivals to challenge your ascent, no sponsorships to earn, no storyline elements of any kind. So, even though we had fun from one race to the next, eventually it grows stale because you’re doing the same thing over and over again. Win a race, earn stars to unlock more circuits, earn cash to buy new cars. Rinse and repeat.

Well concede we’re not the target audience for this game. Nonetheless, we can’t help but feel GT6 could’ve been more welcoming by providing some added context for your actions. Looking back, it really helped us invest in games like ModNation Racers, Driver: San Francisco and Split/Second. To be clear, this is a better (and far more thorough) representation of racing than any of them, but those games offered a reason to go from one race to the next other than just unlocking more content.

Speaking of content, it’s worth circling back to that because just mentioning it in passing doesn’t do the game justice. There is an incredible number of cars (more than 1,200) and tracks to enjoy in Gran Turismo 6, with progressively harder circuits, licensing tests, mini games (known as coffee breaks) and plenty of other standalone races. Every car is also customizable, which is well streamlined thanks to a very solid front end interface that allows you to keep track of all the available information.

Beyond the extensive single-player campaign, there is also a multiplayer component that unlocks after you reach the third circuit. As we found out quite quickly, however, being able to dominate the computer at that level doesn’t translate into much success against human drivers. Our own shortcomings aside, the performance is very good with no real lag to speak of.

In some ways it feels like a cop out to label Gran Turismo 6 as a “your mileage may vary” title… after all, you can pretty much say that about any game. Still, it feels particularly accurate here because ultimately it’s your enjoyment of the races and desire to unlock more content and buy more cars that’ll determine just how many hours you put into it. For me, GT6 is a technically proficient driving simulator that could use a bit more sizzle to go with all that steak.