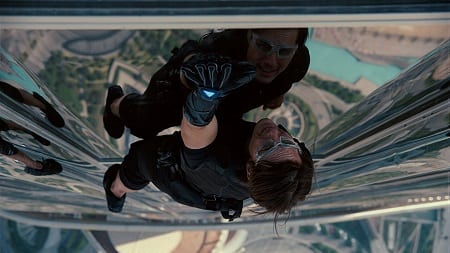 ​​Remakes of old TV shows were all the rage in Hollywood for a time, and though most of them were one and done, Mission: Impossible proved it still had plenty of life left as an IP. It started back in 1996 with Tom Cruise in the starring role and veteran director Brian de Palma (Scarface, The Untouchables) at the helm.

It’s certainly grown and evolved over the years, and now Paramount is bringing the first five Mission: Impossible films to 4K UHD ahead of July’s Mission: Impossible — Fallout. Each copy includes the feature film on 4K, and a Blu-ray containing the film along with all the special features and bonus content. There are no new extras created specifically for the 4K release. A digital copy is included as well.

Without question, the original comes the closest to its source material with an emphasis on spying, infiltration and deception versus its increasingly action-heavy sequels. It also includes Jim Phelps (played here by Jon Voight), who was a featured character in the TV series. The movie is pretty solid with a few plot twists, some decent action and the iconic server infiltration — speaking of which, revisiting the “advanced tech” of the mid ’90s is a hit — but if you came on board later the pace may feel considerably slower.

Upgrading a 20-plus-year-old film has its challenges, and the results here are less than perfect. The improved fidelity is at its best in close ups in which the pre-HD blemishes suddenly appear, but there are some missteps in other moments, often when things are pulled back, that result in some noticeably blurry sections. A clean audio track makes the overhaul presentation a net positive, though it’s not night and day over the Blu-ray version.

In a decision that clearly telegraphed the series’ shift toward action, legendary Hong Kong director John Woo was brought in to ramp up the stunts, the dual-wielding pistols and, of course, the doves. Now Ethan Hunt (Cruise) is essentially a superhero, overcoming odds through sheer force of ass whoopery. He’s joined by an absolutely stunning, in-her-prime Thandie Newton in a performance that made us want to watch more of her films. It’s arguably the weakest entry in the series, but it holds some charm as a popcorn movie.

We’re treated to better picture quality here than its predecessor, which is important since there’s a lot more action and fast-paced sequences to take in. While not immune to blurriness, MI2 looks pretty crisp throughout, and we’re all in on Newton in her 4K glory. The sound also feels like a step up with all the various action elements neatly layered to add even more juice to some of the film’s best set pieces.

For all intents and purposes, MI3 is the genesis of the ongoing franchise. It features J.J. Abrams as the director (he has continued on as a producer), adds Simon Pegg as Benji, gives Ethan a wife (who appears to be returning in Fallout) and so on. MI3 is also probably the darkest of the five films, featuring a rawer, more personal storyline for Ethan and a less cartoonish villain, played by the late Philip Seymour Hoffman. Other fun tidbits include an appearance by Breaking Bad‘s Aaron Paul and a short-lived turn for Laurence Fishburne.

MI3 has some of the series’ best scenery, including a fun mission in the Vatican, all of which looks better than ever in the 4K version. The faces have a tendency to show an odd waxiness to them, though, which is cause for a few demerits. On the audio side, whoever oversaw the remixing absolutely nailed it, offering up a treat for the ears, particularly in surround sound (or wearing headphones).

Probably our favourite MI to date, Ghost Protocol effectively brings everything together: a globetrotting plot, a likeable team of agents (now with Jeremy Renner) and several outstanding individual moments such as the prison break, the carport fight and Dubai. Much in the same way Woo provides a date range for MI2, the presence of Michael Nyqvist during his brief hot run following The Girl with the Dragon Tattoo trilogy feels wrong — he’s not a bad actor, but he doesn’t feel like a physical foil to the IMF team.

Already a sharp film to watch on Blu-ray, Ghost Protocol is taken to another level in 4K as all of its brightly coloured screens and gadgets look tremendous as does the Dubai skyscraper climb and all-encompassing sandstorm (and Paula Patton in her evening gown, too!). The sound is excellent, but it’s not a noticeable improvement on the Blu-ray.

We did a full review of Rogue Nation when it came out, so to read our thoughts on the movie itself click here. The 4K treatment is a solid step up, but even more so than Ghost Protocol, Rogue Nation already looked excellent in 1080p, so what you’re getting is a little more clarity and crispness, which is never a bad thing. We didn’t notice any meaningful difference between the Blu-ray soundscape and the 4K UHD version.

Although all of the movies reap the benefits of the 4K UHD upgrade, the series’ evolution makes it so only the truly devoted need invest in all five. Those that find the current Mission: Impossible movies more their speed can safely bypass the first two as they feel largely disconnected from what’s come following Abrams’ involvement.