Squeeze Play: An Embarrassment of Riches 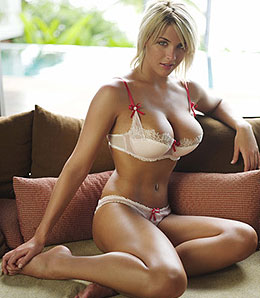 Ronaldo, who once dipped into this tasty treat, apparently prefers to spend his fortune on a ho or three.

Famous playboy/soccer star Cristiano Ronaldo has 88 million more reasons to stay single – the sum he’ll be paid over the next six years by Manchester United thanks to a brand, spanking new contract.

Speaking of Man U., Cristiano could teach a few courses there, having been linked to such hotties as actress Gemma Atkinson, TV star/singer Luciana Abreu and more recently, TV star Carolina Patrocinio.

Was it any surprise that the Patriots lost to the Giants last weekend? How could New England truly be motivated after Brazilian supermodel Gisele Bundchen (aka, Tom Brady’s latest squeeze) promised to run naked down Broadway if New England lost.

Well, now she says she never made that promise.

Oh, jeez. You mean New England let its perfect season slip away for nothing? Talk about a tease.

Then again, according to Patriots’ lineback Mike Vrabel, Gisele has been distracting the boys all season.

“Those legs, that butt, those lips,” he said. “Thankfully, we’ve got football to release the sexual tension. Bringing an erection onto the field is never a good idea, particularly for a linebacker who relies on lateral pursuit to be effective.”

Gisele wasn’t the only Brady conquest making Super Bowl news. Tara Reid, who has been through a locker room full of athletes in her day, was clearly not over the flamboyant QB, summing up her feelings from a Super Bowl party in Italy: “Fuck Tom Brady…I hope the Giants win.”

Looks like Ms. Reid got both her wishes. Too bad she didn’t aim a little higher, like maybe for her career to be resuscitated?

Evans had to leave Dancing With the Stars after launching into a bitter divorce from ex Craig Schelske.

Barker was a big star in college, but never did much as a pro, even though he did spend three years up here, QBing the Argos.

Well, at least now he can live like a star vicariously through his girlfriend. By the way, Barker spent his only NFL season with the Patriots. What is it about being a Patriot quarterback that attracts the starlets?

Don’t Touch me with That Thing

Of course, retailers are also pretty stoked about using the soccer star’s “Golden Balls,” as Victoria lovingly calls them, to flog their wares. London department store Selfridges experienced a 150 per cent rise in sales of men’s briefs in the first day of sales after the launch of the Emporio Armani underwear line.

If those briefs can get a 150 per cent rise out of the common man, ladies everywhere will be lining up for a pair for their man.

As for Victoria, she’s happy with the package that life has dealt her.

A 25-foot penis? Yikes. Would you settle for 25 centimetres, ladies?