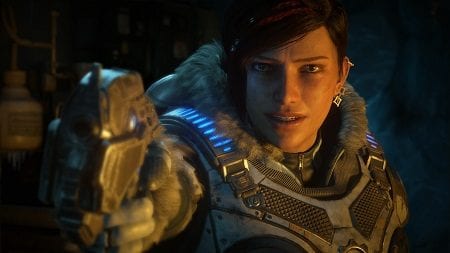 Say what again. Say WHAT again!!!!

With the obvious exception of Halo, no series is more associated with Microsoft’s consoles than Gears of War, which was used as the critical launch title for the Xbox 360 (the same role Halo filled for the original Xbox). It’s somewhat shocking then that the arrival of Gears 5 marks the first mainline release from either series in nearly three years, making it a game Microsoft really needs to hit the mark.

For pure action and meaty, satisfying gun play it’s tough to top GoW, and this carries on the series’ tradition of cover-based mayhem. Gears 5 does make a few tweaks, moving the chainsaw bayonet to the bumper and putting a more traditional knife strike on the melee button. There are also some open-world sections that you’ll traverse via a skiff. It handles capably enough, though we had a few moments of frustration when trying to dodge weather effects.

Experienced on a 4K TV through the Xbox One X, Gears 5 is one of the best looking console games we’ve seen. Plus, while we still get ample amounts of exploring ruined COG installments and cities, the game takes us to heretofore unseen biomes with the two largest sections taking place in snowy mountains and a red-sand desert. It makes the world of Sera feel larger, and the detail work throughout is excellent.

While there’s obviously some loading going on behind the scenes when ducking through tight corridors or opening doors, it’s never long enough to affect the flow, and we can’t recall any instances of the frame rate seizing up. Visibility can be an issue in co-op, however, since Jack provides the light and only follows one character. Lights on the COG armour or guns would solve this minor quibble.

Marcus and J.D. return, but the story revolves around Kait and Del, and their relationship is easily the most layered in the series thanks in no small part to quality performances from the voice actors — we’ve come a long way from Marcus’ gravely delivery and Cole‘s Woooo!, even though those still have their place. The music is enjoyable, and the effects remain first rate. There’s still nothing quite like popping a head with a longshot.

Gears 5 finds Kait, now beset by headaches and disturbing visions, having enlisted in the COG and serving alongside Del, J.D. and Marcus as the newly formed Delta Squad. With swarm activity on the rise, Baird wants them to relaunch the Hammer of Dawn, albeit against the wishes of First Minister Jinn. Before it’s ready, the swarm lays siege to a settlement, and in the aftermath Kait starts seeking camps of outsiders to bring them back into the fold.

It’s during this outreach that Kait’s issues come to a head, and she decides her only option is to confront her past and find the truth. After a fairly traditional Act I, Gears 5 switches to open-world type settings for Acts II and III, which is a significant departure for the series. This allows some flexibility in the order you tackle things and also facilitates the introduction of side quests and self-contained sections, like investigating helicopter crashes.

In another switch, the four-person squad is largely abandoned, and co-op is now limited to three, including one person controlling Jack. We mostly enjoyed the format changes, though at times we missed the focused, linear narrative of the previous games. The story itself is good, particularly the aforementioned relationship between Kait and Del, but the pacing is off with most of the interesting narrative elements wrapped up before reaching Act III.

Even with those missteps, the campaign is among the series’ best thanks to the diversity of locations and enemy arrangements. There are some real standout moments with clever little twists on the Gears formula and/or interesting scenarios. One of our favourites was holding off the swarm as it crosses a frozen lake and shooting the ice out from under it. We’d definitely recommend playing through on Experienced to provide a steady (yet not unreasonable) challenge.

On the multiplayer side, the big addition is Escape, which drops you and two other players into a locust stronghold with very limited resources and tasks you with fighting your way out and scavenging what you need along the way. On one hand, it doesn’t measure up to Horde as a cooperative experience. On the other, it has way more respect for your time and is a fun way to spend 20- or 30-minute bursts.

Horde remains fundamentally the same with some fiddling at the margins with each of the characters (including Jack) now coming with their own unique abilities. It’s still a great mode with friends, assuming you have the time carved out to push through wave after wave without any way to take a break.

On the PvP front, Gears 5 has added Arcade mode, which mixes up the gnasher/lancer loadout and does away with premium weapons appearing on screen. Instead you earn skulls that are then used to buy said weapons in game. We liked it better than the traditional “jump around and fire your shotgun” version, which remains in Classic/Ranked, but this isn’t where we’ll be spending our time with the game going forward.

Microsoft needed The Coalition to deliver, and it did. Gears 5 is another strong entry in a series that has been pretty much airtight since its inception. The game takes a few chances but doesn’t change anything that should risk alienating fans.