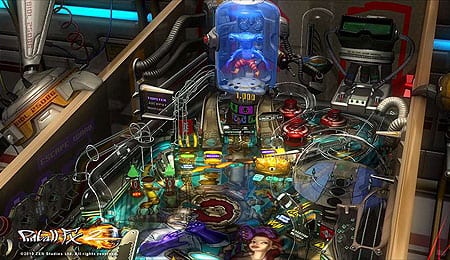 The newly created tables for Pinball F/X 2 are sharp and filled with lots of activity.

I was never much of a pinball fan growing up. To me, it was the consolation prize at a casual restaurant when they didn’t have a Galaga or Ms. Pac-Man machine — a mostly mindless exercise in mashing the flipper buttons while points mysteriously kept increasing. With that continued indifference in place, Zen Studio’s Pinball F/X 2 faced an uphill battle to win me over.

There’s little involved with controlling Pinball F/X 2, though it recognizes pressure sensitivity very well whether you’re using the triggers or bumpers to operate the flippers. No complaints.

All eight tables I got to check out (known as the Core and Classic Collections) while reviewing this game were crisp and well designed, though you can easily tell which four are brand new and which have been brought forward from the original. Zen Studios has done a nice job of creating something that is similar to what you’d see in an authentic table while still taking advantage of working in the digital medium by incorporating things like mini games to make each table feel more unique.

The sound effects and background music are both solid, though I found that in two-player games the constant banter coming from each table’s announcer and/or characters became annoying. I never minded in single-player, though, so it’s more an issue of repetitiveness.

Like real pinball, the goal here is straightforward: score as many points as you can. Given how far games have advanced since the days of pinball you might think that’s an easy task, but it proved to be fairly difficult, especially in the early stages as figuring out how to pile up points is very much a trial-and-error process. That is due in no small part to the utterly confusing in-game documentation that accompanies each table (a problem that extends to many of the game’s achievements).

There can also be a surprising amount of activity going on at one time, making it tough to keep track of both the ball and the instructions being provided in the corner of the screen simultaneously. Only through time and repetition are you going to learn how to maximize your ability to earn points on the various tables.

While the goals may be a bit unclear, Pinball F/X 2 does a tremendous job with the table physics, which make the virtual balls (insert sophomoric joke here) seem to possess real weight. They careen off walls and bumpers in such a way that it doesn’t appear cheap or artificial — instead it feels like a very lifelike representation of the game, and when you lose it’s almost certainly because of a mishit or not reading the table properly than an act of wonky physics.

One of the cool aspects of Pinball F/X 2 is that the game itself is completely free, removing any trepidation from potential buyers. Instead, Zen Studios offers up the individual tables at a reasonable cost, allowing a trial run before asking you to take the plunge. It’s a great system, one that allows you to build your collection as you see fit.

Pinball F/X 2 also does a good job of encouraging a little friendly competition by prominently displaying your friends’ high scores and counting down how many points you need to overtake them. It sounds simple, but you’d be surprised how much pressure it creates when you’re within striking distance of passing someone while on your last ball. For those that prefer a more direct challenge, there’s also head-to-head multiplayer available locally and online.

I’m still no pinball aficionado, not by a long shot, but Pinball F/X 2 is a fun way to spend some time and because of its inherent simplicity, it’s an inviting title for gamers of all skill levels.

Please note these were reviewed as a standalone for the Playstation 3 but are also available on the Xbox 360 as downloadable content.

If you were a kid in the late-1980s/early-1990s, you might remember the rash of licensed movie and TV pinball machines from companies like Data East. These featured an interactive dot matrix display, some moving mechanical parts on the board, and usually at least a few iconic figures or objects that moved with all of the animatronic glory of a Disneyland ride. The Marvel Comics boards for Zen Pinball are essentially the virtual recreation of this. With Spider-Man, Blade, Iron Man, and Wolverine, you get the same formula. The boards are bright and colourful with plenty of decor to satisfy comic book fans, and the virtual animatronics take a 3D model of our heroes and gives them the same stilted animation as those pinball tables from years past. (Whether this was done intentionally or because Zen doesn’t have the animation budget of big-name studios, I’m not sure.)

The boards really use the same template, with the animatronic hero on the bottom left corner, some other figures down at the top of the table, and the usual pinball loops and trappings in between. Wolverine is in full yellow spandex glory, Blade is based on the comic book without a hint of Wesley Snipes or his tax-evasion problems, and Spider-Man and Iron Man wear their traditional gear. They’re also accompanied by cheesy voiceovers, and it sounds like Zen hired one guy to do all of them with the only given direction being to offer up various degrees of gruff. On top of this is the generic cheesy electrorock music which doesn’t really give the ambiance of superheroes.

Virtual pinball games really have their own slim market, and it’s really an all-or-nothing proposition. Comic book fans crossing over might find this amusing for a few bucks, but unless they really enjoy pinball, it’s not worth looking into. If you have some mild affection for any of the aforementioned characters and enjoy pinball, then it’s worth your time.