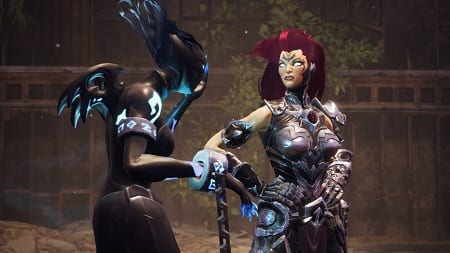 Originally planned to launch much closer to its predecessors, Darksiders III got put on the shelf thanks to THQ’s bankruptcy, with the IP eventually picked up by Nordic Games (which has since been rebranded THQ Nordic). Thus, six-plus years later, gamers are finally getting the third installment in the series, this time stepping into the stiletto boots of Fury, the third of the legendary Four Horsemen, after previously playing as War and Death.

Although the gameplay has evolved from hack n’ slash to more refined, precise action (read: tougher), things still handle similarly. Dodging and countering — triggered automatically when you evade at the proper time — are more important now as pretty much any encounter can result in taking some major damage if you’re too sloppy. The game encourages you to counter, granting significant boosts to your attacks, but the timing often felt sketchy to us, and we ended up going for more standard dodging and normal strikes.

As Fury, your primary weapon will be a whip, which you’ll wield at all times. A series of artifacts will also allow you to imbue your body with one of four elemental-style abilities, each of which has its own corresponding strikes, abilities and weapon (e.g., flame powers include setting enemies alight and a special vertical jump that lets you access new areas). Switching between them is effortless, though there weren’t many moments when the game asked you to toggle those abilities, which felt like a missed opportunity.

Eventually you’ll also acquire a ranged weapon, which automatically targets whatever you’re locked in on or can be independently aimed by clicking R3. Once you have your full arsenal, fights can become an elongated dance of dodging, striking and throwing your boomerang-like weapon to bring the pain. There’s also a pair of boosted forms you can assume based on filling meters, allowing you to deal extra damage to help even the odds.

While the action is usually solid, the controls eventually become pretty convoluted with all the different shoulder buttons and analog sticks coming into play, including several functions that require you to hit multiple buttons at once. It takes time to familiarize yourself with it all, and even then there were times when we mistakenly wasted a form change by accidentally grazing a second button while dodging, which can be frustrating.

Darksiders III has its share of virtues, but cutting-edge presentation is not among them. Even with a world that’s fairly closed off, where exploration often means going a few steps off the beaten path, the visuals lag well behind modern fare. Although it’s been a couple years since we regularly fired up 360/PS3 titles, this didn’t strike us as markedly better, and the far-too-common mid-level loads don’t help that feeling.

On the positive side, enemy design and variety is pretty good. Each one presents its own set of attacks and behaviours, and they’re mixed up enough that we never grew tired of them — except for the little kid demons that throw explosives at you; once was too often for those. Bosses are a highlight for design as well as gameplay, throwing some innovative hooks at you to create interesting and challenging fights.

Voice acting is middling from the top on down, doing enough to keep things moving along but never giving you much to invest in. It’s not just the performances, either, as some of the interplay between Fury and The Watcher is pretty brutal. Sounds effects and music hold up well, including the little ditty that plays when you solve an environmental puzzle.

Set in the same time as the first two games, Darksiders III sees the Charred Council dispatch Fury to Earth, where the Apocalypse has already begun. Her mission is defeat the Seven Deadly Sins, which have escaped from imprisonment and are now wreaking havoc on the world, in an effort to restore the all-important balance between angels and demons. It helps to have played the previous games, particularly the first one, but it isn’t essential.

In terms of structure the game plays like hundreds before it as you’ll follow a talisman to each of the progressively more difficult sins, usually followed by obtaining some item that will allow you to reach new areas. It’s mostly linear, though the game’s quick travel system, accessed from the demon merchant, allows you to retrace your steps to obtain goodies that were previously unobtainable.

Both consumables and leveling up revolve around souls, which serve as the game’s lone currency. You get them from defeating enemies as well as finding objects containing them, and it’s up to you how to disburse them to the merchant. You can invest heavily in shards that provide temporary buffs during battle or on demonic/angelic artifacts and adamantine used in improving your weapons and accessories.

More likely, however, is that most of your souls will be given to the merchant to level Fury up in one of three areas: health, strength and arcane, which covers non-traditional attack damage (e.g., counters). While it definitely makes a difference, especially when revisiting earlier areas, Darksiders III manages to retain a steady challenge, and no matter how strong you get you never feel overpowering.

Although you do have some flexibility as to what order you tackle some of the Sins in, this is largely a linear game with most of its collectibles tucked around a corner somewhere just off the main pathway. At around 16 hours (depending on how often you’re killed), Darksiders III isn’t a particularly long game by modern standards, but it’s a good length based on its design. Much longer and it would’ve reached the point of diminishing returns.

Darksiders III can be a little rough around the edges, especially in terms of presentation, but its focused pace and varied combat make it a worthwhile investment.