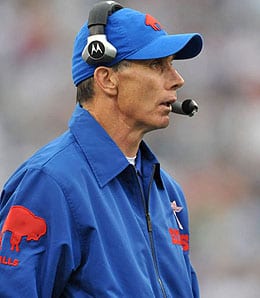 With Dick Jauron in charge, Buffalo fans are in for a long season.

Earlier this week, I discovered one of my friends, who is a big Carolina Panthers fan, had made her way down to Charlotte, North Carolina to watch Eagles-Panthers. Prior to Sunday, the last Panther game she attended? That’s right, the 2008 NFC Divisional playoff game versus Arizona.

Thus, over the span of two trips, she spent close to $200 on tickets, sat in a car for over 40 hours, and drove over 2,400 miles there and back to see Jake Delhomme unleash the following performances:

In the wake of those back-to-back horrendous efforts, NFL teams should enact the “Delhomme Clause,” which means if you’re in attendance for a game where the home quarterback’s passer rating is sub 50, home fans should get their money back or a free pizza.

It’s a reasonable request. If anyone failed at such a rate on their own job, they would likely become acquainted with unemployment.

This country is in one of the greatest economic slides of all-time, yet people are subjected to seeing an athlete — who signed a contract extension that includes $20 million of guaranteed money — put together two of the worst quarterback efforts in the Super Bowl era.

That is unacceptable. The only thing as depressing in Week One was probably being a Bill fan watching the Buffalo meltdown in Foxborough on Monday night.

The same man that is 0-8 lifetime against William Stephen Belichick is also the same man who has posted a winning record once in his previous nine seasons as a head coach.

In fact, if you want to guarantee that your team is going to lose heartbreaking regular season games on a repeated basis, just examine the head coach and quarterback. Those two figures rank as two of your organization’s biggest decision makers — one from a personnel standpoint and the other having a direct impact with their play on the field.

Look at three of the biggest losers from the Week One: Buffalo, Cincinnati and Oakland. All three lost in heartbreaking fashion.

In Buffalo, you have Jauron and Trent Edwards; Cincy has Marvin Lewis and Carson Palmer; and Oakland offers the dynamic duo of Tom Cable and JaMarcus Russell. It’s not an accident those teams end up in those situations.

The aforementioned six gentlemen have a combined zero playoff wins. When a team offers up a bad head coach and either relatively inexperienced or incompetent quarterbacking, that leads to fans crying in their onion dip.

Ten Things We Learned in Week One

1. Well, it didn’t take long for the Eagles’ season to become fun: As surmised in last week’s edition of TMW, Philly’s season was destined to become entertaining. With Donovan McNabb’s broken rib an issue, the Eagles signed former Philly QB Jeff Garcia, who joins Mac5, Michael Vick and Kevin Kolb on the roster. The Eagles are trying to convince people that McNabb might play on Sunday, but that is a strategic move to throw off the Saints. It makes no sense for him to play when their bye lands in Week Four.

While the yardage numbers were not booming for the first two, they at least looked like competent offenses that could score.

3. Tom Brady isn’t all the way back yet: As great as the comeback on Monday night was, Brady’s timing was definitely off. He wasn’t quite stepping into throws and looked out of sync until the final five minutes of the game. It could be several weeks before he returns to 2007 Tom. The good news for Brady owners is that he looked even better trying to escape the clutches of Suzy Kolber during a post-game interview.

5. Giving Delhomme $20 million of guaranteed money wasn’t the best idea: Memo to the Panthers: Draft a quarterback in 2010.

6. Dark days are ahead for the Arizona Cardinals: If Sunday was any indication, the Cardinals are in trouble. The curse of the Super Bowl runner-up is the real deal.

7. The Jets might be for real: One thing is for sure, while their rookie quarterback still has to work out the kinks, the Jet defense looks ready for prime time.

8. Minnesota QB No. 4 is old: He only threw for 110 yards and managed to get sacked four times against Cleveland.

9. The two best teams in Week One played last Thursday night: None of the AFC heavyweights looked Super Bowl ready except for two. After Week One, the two best AFC teams were the same from a season ago — Pittsburgh and Tennessee.

10. Jay Cutler is the newest “gunslinger”: The Bears hope their new quarterback doesn’t find the opposition four times in a game again or repeatedly throws into triple and quadruple coverage. He forced passes and made poor decisions without having a significant pass rush get in his face often.

2. Drew Brees (5) – While he seems to be the people’s choice as “best quarterback in the NFL,” let’s see how he does against a defense that shows a pulse.

3. Tom Brady (9) – After a mortal first three and a half quarters of football in his return, he dragged his left knee and the Patriots across the finish line for a win.

4. Maurice Jones-Drew (2) – After he scored last Sunday against the Colts, he debuted his supermarket dance by pushing a cart and grabbing items off an imaginary shelf. By the way, that dance was inspired by NFL Network’s Rich Eisen. True story.

8. Peyton Manning (NR) – From September to December, the man is a machine.

9. Tony Romo (NR) – Romo doesn’t have to deal with T.O. while Jessica Simpson is being labeled as “desperate” on tabloids. With his mind clear of clutter, Romo had a career day. I’m guessing that is not a coincidence.

10. Andre Johnson (NR) – The Jets turned into the mini-Baltimore Ravens.

As I’m putting this together, I’m watching some old movie from the 70s called FM featuring Martin Mull, Cleavon Little and a bunch of actors I’ve never heard of. Anyways, the Doobie Brothers’ song “It Keeps You Runnin’” is playing in the background.

It brings to mind one of the great TV episodes of all time. The sitcom What’s Happening offered up an episode that featured the Doobie Brothers, a live concert, and a lesson on bootlegging. Nothing sings to me quite like overdramatic television from the ’70s and ’80s.

Oh, one more thing about this movie. Jimmy Buffett is on my screen. I don’t get the appeal. Although, he is one of the main names behind the Dolphins renaming their facility Land Shark Stadium, his popularity amazes me. Is this what Dave Matthews is going to become in 15 years? This concerns me.