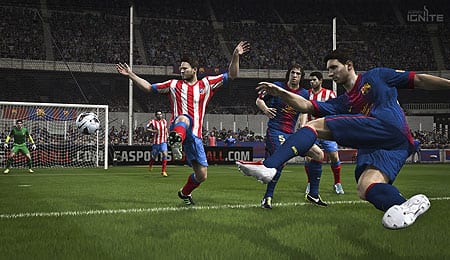 EA Sports’ new Ignite engine takes environments and animation to the next level.

FIFA 14 is arguably the biggest game in the world, so it makes sense that EA Sports decided to use it to showcase its new next-gen (or current-gen, depending on how you look at it) Ignite engine. What’s in the package? Let’s take a look (and here’s the PS3/Xbox 360 review for reference).

Up close, there’s no doubt that there’s been a generational leap forward. It’s not so much in the individual character models, at least not from the outside (internal polygon counts undoubtedly increased). However, the true difference is in the animation. FIFA 14’s animation expands from the PS3/Xbox 360’s library to provide a more lifelike experience. You’ll notice subtle things like the jerseys rippling during a mad dash. From a bigger picture perspective (particularly in slow motion), things look smoother and more spontaneous.

This version of FIFA 14 employs next-gen processing power and experienced players will notice that the AI makes smarter decisions. It’s subtle, and casual players may not be able to tell a difference, but player movement appears to be more varied (in a good way). The easiest way to put it is to say that AI players seem smarter and more creative.

Collision and ball physics are definitely a cut above with the power of new hardware. Collision physics come down to the details, so rather than triggering canned animations, you’ll see more specific reactions. For ball physics, the ball still feels somewhat like it’s magnetically attracted to players. However, there is definitely more ball freedom, both in bounces and errant passes/shots, and this creates a better sense of realism.

One of our biggest critiques with EA Sports’ current generation of titles is the cumbersome menu system. We don’t know why the PS4/Xbox One versions are different from the PS3/Xbox 360 versions, but they’re more streamlined, load quicker, and just easier to use. It’s about time.

All game features and controls are the same, while both online and offline are fundamentally the same.

FIFA 14 for the PS4/Xbox One takes an already strong game to a higher level. There aren’t any new features, so there are some minor functional upgrades to go with the many superficial improvements. If you already own the PS3/Xbox 360 version, this isn’t a mandatory purchase. However, if you’ve been holding out to get your new console before taking to the pitch, you won’t be disappointed.