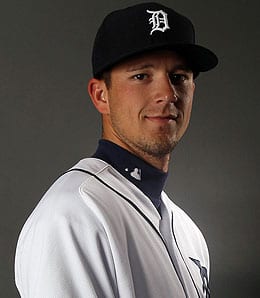 Drew Smyly is likely to get another crack at the rotation.

Week Three of the 2013 season unfolded with what was to be a day for remembering and celebrating the legacy of Jackie Robinson. In one brief instance our world and specifically the world of Boston was turned upside down by the horrific and senseless Boston Marathon bombing. The horrors early in the week gave way to a day of remembrance and resiliency Saturday at Fenway Park. Our thoughts and prayers are with the victims and their families.

Carlos Ruiz, C, Philadelphia Phillies (CBS: 43 per cent owned, ESPN: 5 per cent): Ruiz’s 25-game suspension is drawing to a close and with it comes the opportunity in many leagues to add a top-tier catcher. He is coming off an outstanding 16-homer, 68-RBI campaign and over the past four years his lowest OBP is .355. Get Ruiz rostered now as the cost of acquiring him will only increase as his return nears.

Peter Bourjos, OF, Los Angeles Angels (CBS: 36 per cent owned, ESPN: 1 per cent): The trade of Vernon Wells to the Yankees opened the door to full-time at-bats for Bourjos and so far he’s responded in fine form. Since moving into the leadoff role last week, Bourjos has scored five runs. He’s yet to steal a base but with his speed we know that has to be just around the corner. Mike Trout also seems to like hitting in the two-hole as he’s mashed one homer and driven in nine runs since the switch. Borjous looks to be bouncing back to his 2011 level of play and should be active and starting in all formats heading into Week Four.

Drew Smyly, RP/SP, Detroit Tigers (CBS: 20 per cent owned, ESPN: unowned): We mentioned Smyly back in the season debut of The Wire Troll and apparently nobody was listening. After Rick Porcello got absolutely brutalized to the tune of nine hits, one walk and a whopping nine earned runs in 2/3 of an inning Saturday, owners should be listening. Since struggling in his 2013 debut, Smyly has now put together a string of 13 2/3 IP in which he’s allowed eight hits, one walk and one earned run while striking out 16. Does anyone truly believe that the Tigers will continue to roll out Porcello? We don’t.

Anthony Rendon, 3B, Washington Nationals (CBS: 21 per cent owned, ESPN: unowned): In a rather shocking situation, Ryan Zimmerman hit the DL with a left hamstring strain and very quickly the Nats have turned to top prospect Rendon to man the hot corner. Rendon has enjoyed a great start to the 2013 season, blasting two homers with seven RBI, and an outstanding .462 OBP at Double-A Harrisburg. He’s proved that his advertised great strike zone judgment is the real deal with 14 walks in only 48 at-bats. One word of caution: This is currently a very temporary situation as once Zimmerman is able to return, Rendon in all likelihood will be returning to the minors. Bid accordingly.

Jorge De La Rosa, SP, Colorado Rockies (CBS: 28 per cent owned, ESPN: 3 per cent): After a rather rough start we’ve now seen back-to-back excellent efforts from De La Rosa. On Saturday, he pitched six shutout innings of two-hit, two-walk ball with four strikeouts against the Diamondbacks and is now sporting a 2-1 record on the season. JDLR is quickly rounding into form after struggling with injuries for the past two years.

Hiram Burgos, SP, Milwaukee Brewers (CBS: 4 per cent owned, ESPN: 1 per cent): After an outstanding season last year that saw Burgos jump three levels down on the farm, he limited the Cubs to one earned run over five innings in gaining his first victory Saturday. He’s definitely earned another start… or two.

Allen Webster, SP, Boston Red Sox (CBS: 8 per cent owned, ESPN: unowned): The top prospect for the Red Sox is getting his first kick at the can Sunday. This is likely a one and done situation but given that Boston’s fifth starter is John Lackey expect Webster to be visiting Fenway frequently in 2013.

Todd Helton, 1B, Colorado Rockies (CBS: 6 per cent owned, ESPN: 2 per cent): Helton is day-to-day with a forearm strain but that shouldn’t dissuade a small bid in very deep leagues and NL-only Leagues.

Chris Denorfia, OF, San Diego Padres (CBS: 6 per cent owned, ESPN: 5 per cent): The Cameron Maybin injury and Carlos Quentin suspension have resulted in extra playing time and Denorfia has responded in fine form. He’s not an everyday player, but for now he’s earning every day at-bats. Take advantage of this situation.

Francisco Cervelli, C, New York Yankees (CBS: 22 per cent owned, ESPN: 2 per cent): Cervelli was an after thought in this spring’s drafts, yet he’s quietly getting it done for the Yankees. What’s up with those walk rates?

Didi Gregorius, SS, Arizona Diamondbacks (CBS: 13 per cent owned, ESPN: 2 per cent): Repeat after me: Didi Gregorius is not the second coming of Troy Tulowitzki.

Jose Quintana, SP, Chicago White Sox (CBS: 57 per cent owned, ESPN: 7 per cent): Quintana has now amassed 13 2/3 innings of shutout ball while fanning 14 in his last two starts. He’s young and it’s early, but these type of results have to be counting and not getting wasted on your league waiver wire.

Edward Mujica, RP, St. Louis Cardinals (CBS: 29 per cent owned, ESPN: 38 per cent): The revolving door continues to spin in the Cards bullpen. This week’s featured performer is former Padre and Marlin middle reliever Edward Mujica. If you need saves, he’s currently the go-to guy, but just temper your expectations because as we saw with Mitchell Boggs, job security is not currently at a premium in the St. Louis bullpen.

David Hernandez, RP, Arizona Diamondbacks (CBS: 16 per cent owned, ESPN: 12 per cent): J.J. Putz has a long leash but two blown saves in four opportunities is cause for concern. Hernandez has been lights out and any continuation of Putz’s struggles could lead to change in the ‘Zona pen.