The Wire Troll: Pie in the Sky 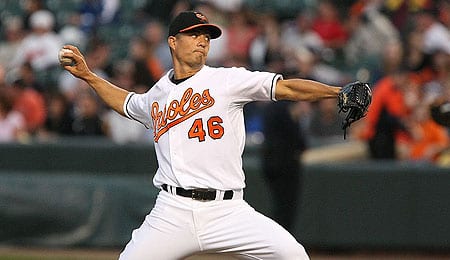 Sure, it’s a back-handed compliment, but Jeremy Guthrie is suddenly the ace of the Orioles.

The interleague trade deadline might be over and done, but the player movement just keeps on rolling. Injuries, ,combined with teams cleaning house and looking to the future have created a plethora of opportunities this week for Fantasy owners. This week’s Wire Troll highlights some of these potential opportunities, so without further ado, let’s get at it!

Felix Pie, OF, Baltimore Orioles: It’s hard to believe that Pie is only 25. We’ve been following his unlimited potential tag since he enjoyed that 2006 breakout campaign at Triple-A Iowa at the age of 21. Over the past ten games, Pie has hit .300 with two homers, six RBI and one theft, making him an intriguing option over the balance of 2010. Potential five-category players should always be near the top of your shopping list.

Hong-Chih Kuo, RP, Los Angeles Dodgers: Jonathan Broxton’s post-break swoon has continued, so last week Joe Torre finally made the move to replace him until his control issues are resolved. Kuo has posted some truly outstanding numbers with 51 strikeouts in 41 IP, a 0.88 ERA and 0.80 WHIP, and has chipped in with four saves. When healthy — as he’s been thus far in 2010 — the 29-year-old southpaw is a dominant pitcher and a solid addition in all formats.

Jeremy Guthrie, SP, Baltimore Orioles: Since the break, Guthrie has been virtually untouchable. In six starts, he’s earned four wins and is coming off a solid start Friday against Tampa Bay where he limited the Rays to two hits over six shutout innings. Seven wins for a starting pitcher in Baltimore is bordering on unbelievable considering how offensively challenged the O’s have been for most of the season. Run, don’t walk, to your nearest waiver wire and get Guthrie rostered to take advantage of his current hot streak.

Pat Burrell, OF, San Francisco Giants: Pat “The Bat” Burrell is finally demonstrating the power that seemed to go missing during his time in Tampa Bay. Since signing with the Giants, he’s enjoy a renaissance and, in his past ten games, is batting .324 with three homers and 12 RBI. Hasn’t this has been an amazing turnaround for Burrell since he was DFA’ed and subsequently released by the Rays?

Michael Brantley, OF, Cleveland Indians: This 23-year-old is going to be a permanent fixture in the Tribe outfield going forward and he’s beginning to show off his highly touted skill set. The trade of Austin Kearns to the Yankees opened up a roster slot and even though Brantley disappointed in his early audition it appears as if the Tribe is playing it smart by inserting the kid into the lead-off slot where he belongs. The great strike zone judgment Brantley has flashed in spurts seems to be coming to the fore and in his past ten games, he’s batting .313 with two thefts and eight runs scored. This young phenom should be owned in AL-only and keeper formats and be on the radar in standard 12-team formats.

David Murphy, OF, Texas Rangers: Josh Hamilton has moved into centre field to replace the ineffective Julio Borbon, and Murphy has been the principle beneficiary. In his past ten games, he’s batting .394 with three homers, 12 RBI and two thefts. Nelson Cruz was pulled from Saturday’s start with a tight hammy and could be looking at a third hammy-related DL stint this season. Combine that with Borbon’s struggles and that should guarantee playing time for Murphy, making him a solid option in all formats.

Orlando Hudson, 2B, Minnesota Twins: Hudson gets very little respect from Fantasy owners. Amongst his peers at second base, he is currently ranked seventh in runs scored and fourth in batting average and has chipped in seven thefts and five homers. Why is he owned in only 53 per cent of CBS leagues? In six games since Hudson came off the DL, he’s batting .300 with five runs scored and four RBI. Hitting at the top of the Twins order should guarantee plenty of runs scored down the stretch for the very-underrated Hudson.

Other Options to Ponder

Jhoulys Chacin, SP, Colorado Rockies: The 22-year-old right hander amassed 89 strikeouts in 82 1/3 IP in his first stint with the Rockies and is looking at a two-start week with the Dodgers and Diamondbacks on the agenda. This, combined with the fact that he’s currently owned in only 23 per cent of CBS leagues, should have Fantasy owners heading to the waiver wire in droves.

Gregor Blanco, OF, Kansas City Royals: Blanco is penciled in as the starting centre fielder in Kansas City and if your need is speed, his five thefts this month should get your attention.

Mark Teahen, 3B/OF, Chicago White Sox: The multi-position eligibility is intriguing, but the modest power potential Teahen has demonstrated in the past is best left for AL-only leagues.

Yunesky Maya, SP, Washington Nationals: In his season debut for the GCL Nationals last week, Maya coaxed eight ground balls and a strikeout in completing three perfect innings. It’s not out of the realm of possibility for us to be seeing the former Cuban league star pitching in Washington when rosters expand next month.

David Robertson, RP, New York Yankees: After a terrible start to the 2010 campaign, Robertson is starting to flash the talent he demonstrated last year. He hasn’t allowed an earned run since July 2 — a span of 16 appearances — and even managed to earn a save Thursday while giving Mariano Rivera a much needed break. The high strikeout rates, holds potential, and even the odd save opportunity make Robertson a great option heading into September.

Randy Wolf, SP, Milwaukee Brewers: Since incurring that horrendous beat down just over a month ago, Wolf has very quietly been putting up some decent numbers. Two wins in his last four starts while allowing only nine earned runs bodes well for those playing in NL-only leagues.

Jeanmar Gomez, SP, Cleveland Indians: Gomez, 22, continues to defy the odds and has now amassed three wins in his four starts since getting the call. With the Royals and Tigers next on the slate, his run of quality starts could continue.

Brandon Lyon, RP, Houston Astros: Lyon is a “temporary” closer solution for the ‘Stros with Matt Lindstrom suffering through lingering back issues.

J.J. Putz/Matt Thornton, Rp, Chicago White Sox: Bobby Jenks is dealing with back spasms that will likely land him on the DL. The bullpen-by-committee scenario is in full force for the South Siders.

Pat Misch, SP, New York Mets: Hisanori Takahashi has been moved back into the bullpen and the Mets have turned to their farm system for help, Enter Misch, a pitcher that RotoRob suspected way back at the beginning of May could get another chance in the Show. And the solid start Saturday against the Phillies and Roy Halladay that Misch put together makes him a candidate for future starting opportunities.

Clay Hensley, RP, Florida Marlins: It’s been a very rough start to August for incumbent Leo Nunez and should he continue to struggle, Hensley is waiting in the wings.

Homer Bailey, SP, Cincinnati Reds: I always find it challenging when looking at a starting pitcher that has the first name “Homer,” but he did have quite the run last fall and is taking to the hill Sunday. Check out the results and bid accordingly.