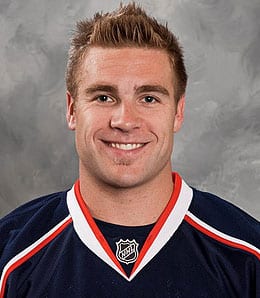 Grant Clitsome has been piling up the points.

If you have made it this far in your Fantasy hockey league, then congratulations are in order. There have been more trials and tribulations in the first 13 weeks than any mortal person can imagine. You probably have even had the feeling like you sold your soul in some cases. This shortened season has been downright bizarre at times.

Players have had miraculous recoveries and some have had more setbacks than the making of any Mel Brooks sequel. (For the record, Brooks never made any sequels though some would argue that there are some movies with a recurring theme.) However, that is not important now. What is important is The Wire Troll for Week 14.

Here is the dilemma with this week’s action. Basically it boils down to six days and one game. Ottawa and Boston will be making up a game on April 28, so check your leagues to see if they are counting that contest. You might be surprised there. That being said, it is time to get down to business. Let’s do work!

Erik Karlsson, D, Ottawa Senators: After Karlsson’s Achilles’ tendon was torn (not a complete tear), most believed we would not see him unless Ottawa made a deep playoff run. Even that prognosis was considered optimistic. Yet here we are as Karlsson has been declared 100 per cent, but just needs to get in game shape. Thanks to Rotowire.com for this stunning nugget.

Karlsson was cleared by team doctors to resume practicing with his teammates, and GM Bryan Murray went as far as to call him 100 per cent. Murray indicated that all that’s left for Karlsson to do is get back in game shape before he returns to the lineup, so it looks like he will be back before the playoffs begin.

What we have here is a Fantasy stunner for the ages. The original outlook was for Karlsson to be sidelined for 4-to-6 months and yet less than two months later, here is last year’s Norris Trophy winner nearly ready to return. How should you proceed? Simple: why haven’t you picked him up yet? After all that his ownership rate of around 30 per cent is about to — in a word — skyrocket. Karlsson may be eased in at first but the ATOI curve will rise quickly. That Sunday meeting with Boston could be huge for Fantasy owners. Get on it now!

Michael Grabner, RW/LW, New York Islanders: Sometimes Jeff Carter just is not available in your Fantasy league, so why not grab another player who could provide a decent lift in the goal department? Grabner averages around 2.5 shots a contest which is modestly good and for the season he has 16 goals in 42 games which is not too bad either. He is owned only in 15-to-20 per cent of most leagues from an across the board standpoint. Will you take that risk? It may be worth it as the Islanders continue to fight for a playoff berth. Teams will key on the first two lines while Grabner sneaks some man advantage time along with his third line role.

Grant Clitsome, D, Winnipeg Jets: Sometimes a plug and play option is needed when two teams are so evenly stacked. Clitsome has six points in his last seven games at a time when Tobias Enstrom is nowhere to be found and someone had to step up on the blueline in place of him. In leagues in which you are desperate, a guy like Clitsome (less than 10 per cent ownership) is a good shot in the dark. The Winnipeg schedule will not be easy and the pressure will mount but it could always be worse.

Our Parting Stab In The Dark

Mike Zibanejad, C/LW, Ottawa Senators: This one is truly a gamble. Zibanejad has cooled off some from a torrid first couple weeks of April but he did have seven shots on net against Washington on Thursday. It does seem his speed and poise are better matchups against teams like Boston, Buffalo and Washington. It is duly noted that Ottawa plays Boston on Sunday. We are not sure of what point production to expect but something tells us that Zibanejad may have a surprise in store for those who take the risk. The less than 5 per cent ownership says “pick me, pick me!”

Amazingly, we are at the end of the season after this week. Check back with us in a couple weeks to see our best and worst of the year. In the meantime, do not forget to follow us @ChrisWasselTHW for the latest Fantasy hockey news and more.