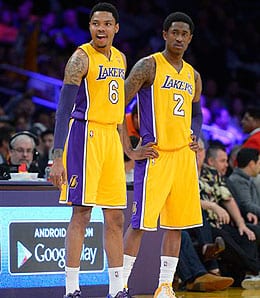 Kent Bazemore (left) could be a Fantasy factor for the rest of the season. (Bigstory.ap.org)

Now is your last chance to potentially buy low on Suns guard Eric Bledsoe. The talented combo guard, who suffered a knee injury several weeks ago, is close to returning to the lineup and could be back early next week. If your league’s trade deadline hasn’t passed or you’re in a super shallow league in which Bledsoe might still be available via the waiver wire (97.5 per cent owned in ESPN leagues), don’t hesitate to take action!

Kent Bazemore, SG, Los Angeles Lakers: In last week’s edition of The Wire Troll, we told you to keep an eye on Bazemore after being dealt from Golden State to the Lakers at the trade deadline. Coach Mike D’Antoni decided to immediately throw Bazemore into the mix and he’s responded splendidly, averaging 17 points, three assists and two steals per game. With all of the Laker injury problems including the doubtful return of Kobe Bryant, there is no reason to believe that Bazemore can’t be a Fantasy factor for the remainder of the regular season. Check out the video below from Friday to see what Bazemore is capable of doing in transition.

Jerryd Bayless, SG, Boston Celtics: Speaking of the walking wounded, the Celtics have suffered their fair share of injuries including Avery Bradley (ankle sprain) and now Gerald Wallace (knee surgery). This has opened the door for Bayless to see increased playing time. In his last outing versus Atlanta, Bayless played 36 minutes, scoring 29 points (five treys). He should continue to see increased minutes with the Shamrocks in need of offensive punch.

Patty Mills, PG, San Antonio Spurs: Typical Spurs: Tony Parker and Manu Ginobli are forced to miss games due to nagging ailments and the relatively unknown Mills becomes the unsung hero. Since emerging, Mills has registered several productive efforts including games of 32, 29 and 25 points. He has certainly made a case to play meaningful minutes even when the Spurs return to better health.

Jordan Hamilton, SG, Houston Rockets: Rockets GM Darryl Morey prides himself on deadline day trades. This season it was not a blockbuster deal, but he acquired a former first round draft choice (Hamilton from Denver) for veteran point guard Aaron Brooks. Hamilton certainly needed a change of scenery after failing to get untracked with the Nuggets. So far he’s opened eyes in Houston with two consecutive impressive efforts off the bench, so he bears watching down the stretch.

Trevor Booker, PF, Washington Wizards: You knew it was only a matter of time before Nene Hilario would be sidelined with yet another injury. This time around a sprained knee is expected to keep him out six weeks, meaning Booker assumes the starting power forward spot for the Wizards. Booker can be a productive source of rebounds with a respectable field goal percentage to boot.

Mike Dunleavy Jr., SF, Chicago Bulls: It sure looked like the Bulls were looking forward to the 2014 draft lottery after dealing Luol Deng to the Cavaliers a couple of months ago. Enter Dunleavy, who has been a pleasant surprise in his 12th NBA season. He and free agent pickup D.J. Augustin have sparked the Bulls into the number four seed and a potential homecourt advantage in round one of the playoffs. Dunleavy has contributed a quality blend of Fantasy stats in all related categories and is a must add in your league.

Vince Carter, SF/SG, Dallas Mavericks: Here’s yet another NBA veteran still capable of offensive firepower. Carter has been a major spark off the pine for Dallas, contributing 11.7 points, 3.5 rebounds and 2.5 assists per game. Most impressive is his average of three treys over the Mavs’ last eight contests.

Matt Barnes, SF, Los Angeles Clippers: Barnes has taken over for Jared Dudley as the Clippers’ starting small forward and is best known for his ability to shoot the threeball and record steals. On Sunday, those skills were on display against Oklahoma City (24 points, six treys and two steals).

Alexis Ajinca, New Orleans Pelicans: Ajinca has assumed first team centre responsibilities for New Orleans. In three starts since the promotion, he is averaging 14 points, nearly 10 boards and one block per contest. It looks like he’ll get a long look down the stretch for the lottery bound Pelicans.

Jermaine O’Neal, Golden State Warriors: Like the aforementioned Dunleavy and Carter, O’Neal has recently discovered the “fountain of youth” in his 18th NBA campaign. J.O. has played extremely well in the absence of David Lee (flu) and Andew Bogut (shoulder) and can be counted on for considerable minutes even when his two frontcourt mates return.

Byron Mullens/Henry Sims, Philadelphia 76ers: With Spencer Hawes dealt to Cleveland, Mullens and Sims are the beneficiaries at the pivot position for Philadelphia. While neither player has tremendous upside, they can be useful if your roster is thin at the centre position.

Now it’s your turn. Let us know in the comments section below who your favourite waiver wire pick of the week is.