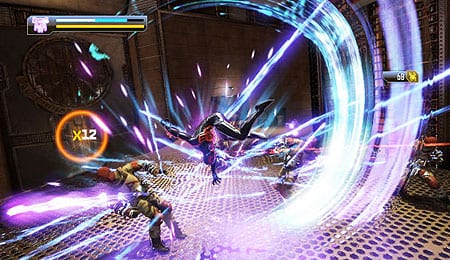 Hey Spidey, Chun Li called, and she wants her kick back.

Initially I was disappointed with what I perceived as a lack of depth in combat options. However, as I progressed and bought new moves I found there was actually quite a bit to do, even if I leaned on a handful of combos in tight situations. Both Amazing Spider-Man and Spider-Man 2099 have their own repertoire of moves, which while similar helps keep things varied.

Jumping, melee and ranged attacks are mapped to the face buttons while grabbing, web slinging and a signature evasion move occupy the shoulders and triggers. Using your evasion move is the key to success as you’re essentially unhittable when it’s activated (it’s got a limited lifespan with a meter that drains and recharges quickly), and as you’re constantly outnumbered you’ll need it to do a lot of sticking and moving.

Combat is generally precise, though web swinging and wall crawling continue to be disorienting on occasion. Also bizarre is the omission of a dodge button to avoid enemy attacks when your meter is drained.

While I wouldn’t call Edge of Time a worse looking game than Shattered Dimensions, the former is missing some of the variety and charm of the latter — to wit the graphical style has been changed significantly. Character and enemy animations look slick even if the type and variety of foes runs shallow. What’s most disappointing is the environments repeat so liberally. Yes, the entire game takes place in two versions of the same building, but that doesn’t mean we couldn’t have seen more variety from one room to the next.

Easily the best part of the audio is the voice work of the two Spider-Men. Peter Parker and Miguel O’Hara keep up a running dialogue of entertaining banter throughout the game, adding a large dose of personality to a game that’s lacking it on the visual side. Iceman himself, Val Kilmer, even makes an appearance in a surprisingly limited role. The musical score is decent.

Houston, we’ve got a rip in the space-time continuum. Penned by comic book and sci-fi veteran Peter David, Spider-Man: Edge of Time features a story that follows the efforts of Parker and O’Hara as they struggle to restore the timeline that has been damaged by Alchemax’s Walker Sloan (Kilmer). It’s a familiar take on a storyline we’ve seen dozens of times in all kinds of mediums. That’s not to say that it’s poorly written, but trust me when I say you’ve seen this before.

Leading up to its release, the game was touted as having a “cause-and-effect” mechanic where actions in one time period would affect the other. Strictly speaking that is accurate, but it’s a bit misleading as only pre-scripted actions will send ripples through time. For example, if one Spidey is in trouble the other will often travel to the same area to perform an action to help their counterpart. It’s a fun little twist, though it feels like more could’ve been done to give weight to your actions.

As noted, all of the action in Edge of Time takes place within a single building. Unfortunately, that lack of diversity carries over to your objectives as 90 per cent of the game or more is spent fighting rooms full of bad guys while trying to obtain a key or other object that’s needed to progress. Even with reasonably fun combat, that repetitiveness wears thin before the six- or seven-hour campaign wraps up.

Also playing into the sense of “been there, done that” that builds up the longer you play, is the predictability of encounters. Edge of Time openly embraces the “Rule of Three” wherein every notable fight in the game takes place over three stages. There’s even some self-deprecating humor about that phenomenon at one point, and yet nothing changes. It seems odd that the game would basically mock its own formula for combat and still never deviate from the path.

Progression is two-pronged: defeating enemies and picking up purple or blue orbs will net you the points needed to purchase new moves and more powerful combos, while finding hidden spiders or clearing rooms of all their enemies provide the currency to expand your health and focus meters. It’s a tried and true system that works fine here.

Outside of the main campaign you’ll also unlock challenges that can either be attempted at the time or later. Challenges fall into one of two categories: combat and collection. In combat you’ll be asked to do things like avoid being hit while defeating X number of foes or perform a lengthy combo. Collection trends toward scooping up orbs under a par time. Each one offers a chance to win one of three medals, which then award you with bonus items such as new costumes.

Once you’ve finished the campaign, there’s not a lot to do. A higher difficulty setting is unlocked, and you can also try to pile up gold medals in all the challenges, but given the repetitive nature of the combat I question how many gamers will head back for seconds.

Although I had fun during most of my time with Spider-Man: Edge of Time, I’d certainly had my fill by the time the credits rolled and have no desire for more. It’s a solid enough experience while it’s happening; it’s just not one that’ll stay with you.