Blu-ray Review: Me Before You 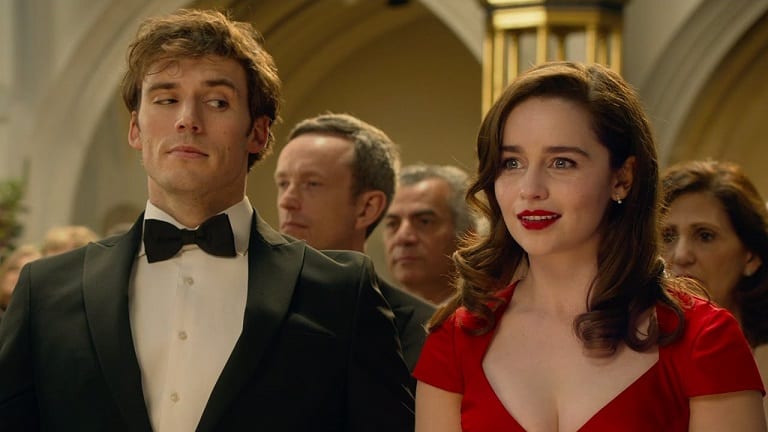 I, uh, saw your boobs on Game of Thrones.

To say that romance films are pretty far down our genre rankings would be a fair assessment, so we were joined by our wife for a (possibly) fun-filled evening of Me Before You starring Emilia Clarke, best known for her role as Daenerys Targaryen on Game of Thrones, and Sam Claflin, who played Finnick in The Hunger Games. Let’s break out the Kleenex and see what we have to work with.

William Traynor (Claflin) has it all: wealth, a good career, a beautiful girlfriend and a fearless approach to life that has him jetting around the world… until one day he’s struck by a motorist while walking and is left a quadriplegic. Although his brain is intact, the damage to his body sours him on life, and his family has trouble finding a caregiver that will stay on to look after him.

Enter Louisa Clark (Clarke), who was just let go after spending six years working at a bakery and is having trouble finding work in the local community. Lou lives with her parents, grandfather, sister and nephew, and the family relies on her to help pay the bills. So, despite a lack of experience, Lou jumps at the chance for a six-month contract with good pay to look after Will.

Things are awkward at first, but eventually Lou’s perpetually optimistic view on life starts to wear down Will’s defenses, and the two of them become closer. However, the six-month timeframe is what Will promised his parents he’d agree to before ending his life, and when Lou finds out it becomes a race to try to show Will there’s something worth living for.

Claflin does a pretty good job as Will, even if the way the character behaves and the decisions he makes make him a bit difficult to root for over the long haul. He’s much better in the film’s most dramatic scenes than Clarke, who hits too many high notes on both sides of the spectrum and rarely allows much subtlety to slip in.

Visually, Me Before You is beautiful. The Traynor’s money allows for a spectacular home that overlooks a castle, which they also own. A later trip to the island of Mauritius is a nice contrast to the rolling fields and picturesque snowfall of the England scenery.

There are some solid secondary performances as well, notably Will’s parents, Stephen
(Charles Dance) and Camilla (Janet McTeer), and his physical therapist Nathan, played by Stephen Peacocke, who had a likeable turn in Whiskey Tango Foxtrot as well.

Let’s start with Lou’s wardrobe. It is, quite frankly, ridiculous. We get it, she’s supposed to be quirky and doe eyed, but they dress her like she’s 10 years old with absurd ensembles of colourful tights, funky shoes and odd-looking tops. A deleted scene ever has her in full PJs with animal slippers. Ugh.

While it’s not an indictment of individual performances, the casting of so many familiar faces from massively popular franchises was a distraction. Beyond the characters we noted in the opening, there’s also Game of Thrones’ Tywin Lannister (Dance) and Neville (Matthew Lewis) from the Harry Potter films. And of that group, only Dance is playing someone remotely similar to what you’re accustomed to seeing from them.

Here’s a question: do you or people you know openly gawk and sneer at people in wheelchairs? No? Neither do we, yet in Me Before You it seems everyone is shocked and/or appalled whenever Will shows up at anything. It feels completely over the top.

Easily the biggest thing, however, is how you view Will’s desire to end his own life. Although we’re told a few times about the pain he’s in, most of the film shows him as extremely well taken care of and living in the kind of luxury very few people enjoy. It made him a less sympathetic character, one that could even be considered selfish in some ways.

Roughly six minutes of deleted scenes highlight the limited offerings, though outside of one scene with Lou and Camilla there’s nothing of much substance in there. A quick look at adapting the novel to film features extended comments from the author. While that’s fine, the outtakes, which amounted to a two-minute gag reel, felt out of place given the substance of the film.

Although it’s heavy handed with its feels and falls short of fully demonstrating Will’s plight, Me Before You is a decent romance that benefits from its stunning scenery.

By HC Green
Tags: Blu-ray reviews, Emilia Clarke, Me Before You, Sam Claflin
Posted in Herija Green, Movie Reviews | Comments Off on Blu-ray Review: Me Before You