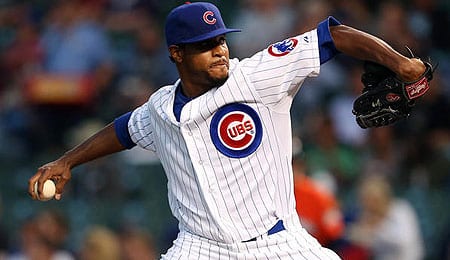 Edwin Jackson has been on fire in May. (Nuccio DiNuzzo/Tribune photo)

Edwin Jackson, SP, Chicago Cubs: Jackson is on his eighth team and about his 78th lease on life. He has a World Series ring to show for his travels but is about the last guy you’d expect to get excited about when he’s sitting there on the waiver wire. After all, E-Jax led the National League with 18 losses last season, but don’t sleep on the 30-year-old in 2014. Less than one per cent (0.9) own Jackson in ESPN leagues and just 15 per cent have him in CBS leagues, but he’s sizzling in May. Despite a 1-1 record, Jackson has a 1.80 ERA (four earned runs in 20 IP) with 23 strikeouts to just three walks. For the year, the journeyman is 3-3 with a 3.98 ERA, but he is a reliable strikeout option, with 49 Ks in 54 1/3 IP, including 11 punchouts in seven innings on Sunday (see video below). Considering we slotted him 146th in our Starting Pitcher Rankings heading into the season and he’s currently looking like a top 80 option, Jackson has definitely been a pleasant surprise.

Devin Mesoraco, C, Cincinnati Reds: Any Fantasy owners worried that Mesoraco would cool off after his trip to the DL should be kicking themselves right about now. He’s currently owned in 83 per cent in CBS leagues and 60.9 per cent in ESPN leagues (up 28 percentage points in the last week), and the burly catcher went 4-for-4 with two doubles on Sunday after smacking a three-run homer in his first game back on Friday. For the season, Mesoraco is 27-for-54 (.500) with four homers and 17 RBI. Oh, he also has a .541 OBP and 1411 OPS. Seriously.

Matt Dominguez, 3B, Houston Astros: Being the best hitter on the Astros is like being the nicest vehicle in the used car lot. Still, let’s not knock Dominguez, especially after his multi-homer effort on Sunday. Owned in just 2.8 per cent of ESPN leagues (up 0.8 percentage points in the last week) and 44 per cent in CBS leagues, Dominguez is more than worth a look. He has six multi-hit games in his last nine, and is hitting .283 in May. Dominguez’s overall numbers are solid if not spectacular: .258/.318/.445 with seven homers and 18 RBI.

Cody Asche, 3B, Philadelphia Phillies: We were high on Asche going into this season. He got off to a very slow start, but he’s another underowned third baseman worth taking a chance on if you’re down on your luck. Neglected by ESPN owners (0.7 per cent) and slightly less so by CBS kin (13 per cent), Asche has gone as the Phillies’ inconsistent offense has gone. But what a weekend it was for him: in three games against Cincinnati, he hit .538 (7-for-12) with a homer, two doubles, and six RBI. April showers have brought May flowers for Asche, as he hit just .161 in the season’s first month but is batting .318 since.

Gavin Floyd, SP, Atlanta Braves: So what is it, Fantasy owners don’t trust pitchers coming off injuries? Floyd saw a jolt in his ESPN ownership (8.7 percent, up 7.7 percentage points), and 32 per cent of CBSers like the Gavinator (okay, we’ll work on the nickname), but he is nothing if not a solid rotation option at this point. In three starts since his activation, he has pitched to a 2.41 ERA, though he doesn’t have a win to show for his efforts. Floyd gets his fair share of strikeouts, too, with 17 in 18 2/3 IP.

Nolan Arenado, 3B, Colorado Rockies: If for no other reason than overpopulation, maybe it’s time to hop off the Arenado bandwagon. Yes, the 28-game hitting streak was nice and all, but back to reality (somewhat) for the 100 per cent-ESPN-owned and 98 per cent-CBS-owned 23-year-old. Since the epic streak ended, Arenado is batting a paltry .172 (5-for-29) with no homers or RBI and three doubles in seven games. No, we’re not saying part ways with Arenado for Asche, just that Arenado is not the Mr. Perfect he appeared to be when he got halfway to Joltin’ Joe’s record.

Zack Wheeler, SP, New York Mets: We get the feeling Wheeler’s 12.2 percentage point drop in ESPN ownership is a sign of things to come, as another rough outing could be an indication that the 23-year-old may not be ready for prime time just yet. He’s still owned in 79 per cent of CBS leagues, but Wheeler has had a trying May, going 0-2 with a 6.20 ERA as he’s allowed 17 runs (14 earned) in 20 1/3 IP over four starts.

Domonic Brown, LF, Philadelphia Phillies: From an underowned Phillie to an overowned one, we present Domonic Brown. It was around this time last year that Brown was delivering homers on almost a nightly basis, but 89 per cent of CBS owners and 67.6 per cent of ESPN owners (down 14.1 percentage points) have been sorely disappointed this year. (Of course, it’s not a huge shock to us.) Brown is batting just .215 with two homers and 20 RBI and is scuffling a .120 clip (3-for-25) in his last six games.

Mike Napoli, 1B, Boston Red Sox: The beard. The bombs. The big hits in big moments. Napoli seemed to have it all in 2013, which is why he is universally owned in ESPN leagues and 92 per cent of CBS leagues. However, Nap has hit a snag of late, as he has not homered since April 22 and his average in May is just .176. He’s hitless in six of his last nine games, but the power outage (five homers) is the more concerning aspect of Big Mike’s sub par 2014 season.

Austin Jackson, CF, Detroit Tigers: A few seasons ago, we opined that Jackson was the key to the Tigers’ offensive success at the top of the order. Thanks to Ian Kinsler, that’s no longer the case, and towards the bottom of Detroit’s lineup Jackson has continued to post mediocre numbers. He is a full-own in ESPN and is owned in 95 per cent at CBS, but Jackson’s best traits have been in hibernation so far with just six stolen bases, two home runs, and a .346 OBP. In his last six games, he is just 2-for-20 (.100) and has a mere two RBI this month.

Now it’s your turn. Let us know in the comments below whose stock is soaring or plummeting in your opinion.