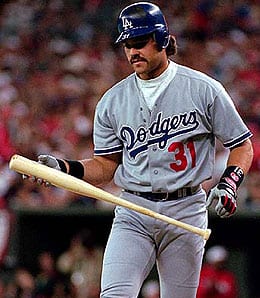 Finding the next Mike Piazza is not an easy task — especially in keeper leagues.

Our plan this week was to revisit the Spikes Up Draft Review series of columns, with an examination of the second round of the 2000 MLB first year player draft. Unfortunately, that’s a research-intensive project, and with all the balls in the air right now, I’m going to save that one for a week or two. After all, those picks aren’t exactly going anywhere. Instead, let’s focus on some recent events that have caught my eye and discuss their Fantasy relevance.

One of the great scourges of keeper league Fantasy ball is finding catchers of the future. I find that every season, I throw at least one dart at the board and use one of my minor league picks on a young catcher in the hopes of catching lightning in a bottle. Who doesn’t want to find the next Mike Piazza or (gasp!) Joe Mauer (who has just been sick this year)?

Well, here’s a new name for you to tuck away: Jake Smith. Recently named as the 2006 Johnny Bench winner, an award presented to the top college catcher in the country, the just-turned-23-year-old Smith has good size (6’2”, 217) and showed tremendous offensive ability this year.

Smith has had some difficulty adjusting to the pro game, batting only .154 with just one homer at Single-A so far, and he’s had some serious knee problems that have resulted in three separate operations. But you can’t ignore that kind of potential.

Of course, Oakland has a love affair with top college catchers. Smith is the third Johnny Bench award winner the club currently owns. Kurt Suzuki, currently batting .309 at Double-A, and Jeremy Brown, with a 736 OPS at Triple-A, have also both won the award.

Other past winners include: Jeff Clement, Kelly Shoppach (both of whom are in my minor league system; just call me Billy Beane lite), Ryan Garko and Brad Cresse.

Other catchers considered for the award this season included Jeff Kunkel of Michigan and Miami’s Eddy Rodriguez. The Tigers picked Kunkel in the 37th round of the 2005 draft and then signed him just before this year’s draft. Rodriguez, meanwhile, was taken by the Reds in the 20th round in last month’s draft, but he has yet to sign.

Reds Bash Their Way Back

The Cincinnati Reds, after that fast start to the season (20-9 on May 4), seemed to fall out of the race by losing 15 of their next 23 games to drop to five games behind the Cards. Since then, however, they’ve gone 16-12 and now enter July having set a franchise record for home runs in June.

After smoking a dozen dingers in the last four games of the month, Cincy finished June with 47 long balls in 27 games. Combine that with the Cards’ current woes (nine losses in the past 10 games), and Cincy is back within a single percentage point of the NL Central lead.

Friday night was a perfect example of how this power binge is keeping the Reds in games. They fell behind state rival Cleveland 7-0 only to roar back for a 9-8 win thanks to a solo shot by Austin Kearns, a three-run jack by Juan Castro and – the big blow – a walk-off grand salami by slugger Adam Dunn.

Kearns went yard again on Saturday, his 15th of the season, and has now hit in four straight games as he is finally enjoying that long-awaiting breakthrough season. Expect 30 dingers and close to 100 RBI with a decent average from the 26-year-old. Thanks to a string of injuries, Kearns has dropped in value the past couple of seasons, but if you can acquire him for less than market value in a keeper league, you will reap the benefits of his prime power years, still to come.

D-Train Cools off the BoSox

On Friday night, Dontrelle Willis not only upped his trade value but he did what very few pitchers have been able to do lately – he beat the Red Sox. The D-Train tossed seven strong innings for his third straight solid start in snapping a 12-game winning streak by Boston.

That’s five wins on the year now for Willis, who’s lowered his ERA to 3.96 as the lottery for him continues to heat up. Arizona is said to be very interested, but there are plenty of other teams that have thrown their names in the hat to try to secure Willis’ services.

Boston, meanwhile, despite the loss, is the hottest team in baseball, and in a very rare occurrence in its history, it’s doing it with the gloves. Friday marked the 17th straight game that the Red Sox did not commit an error – a new major league record (the Cards went 16 in a row without a boot in 1992). And the National League doesn’t seem to stand a chance against Boston right now. The loss Friday was just the second in 16 games against an NL team this year. Since mid-June 2005, Boston is a torrid 23-3 in interleague play.

Not in the Cards

As mentioned above, the St. Louis Cardinals are a team headed in the other direction, and pitching has taken the brunt of the blame. The latest culprit was Adam Wainwright, who had been pitching tremendously in a set-up role this season. But Friday night he served up a game-tying homer to Mark Teahen and the Royals went on to beat the Cards in extra innings.

That’s three games in a row now that Wainwright has been scored on, two of which he surrendered a long ball. The former Braves’ prospect is enjoying an excellent rookie campaign, so consider this recent streak a blip on the radar at this point. What’s impressed me most about Wainwright this year is his vastly improved command.

This week we heard from one of our ever-growing fan base in Australia (well, that’s two letters from Down Under now; does that count as a fan base?). Jason Blakely wanted to know whether I’m a Bush man or more of a Westbrook kind of guy.

Firstly, I love your work. I am an unabashed Fantasy baseball lover, and I dig analysis beyond the boxscores. If you have a moment, can you please offer your thoughts on this: Dave Bush or Jake Westbrook?

Westbrook, another pitcher excelling at home, is having a pretty good season. His ERA stands at 4.36, while his DIPS is at 3.98, so the former should hopefully fall into line. Take out a bad game in Detroit and Baltimore, and he’d be a top 15 AL pitcher. In a Fantasy league that rewards wins and quality starts (and to a lesser degree more Ks and fewer BBs), who would you rather have?

Thanks for your time!

Always nice to hear from other baseball fans of the Commonwealth! Thanks for the nice note.

I might be in the minority here, but I’d lean towards Bush – especially in a keeper league – for a number of reasons, including:

The numbers are pretty close now, but I prefer Bush’s chances at a bigger second half than Westbrook’s. And I definitely like Bush better for the long haul if you’re playing in a keeper league.

NEXT: Spikes Up returns July 10. Basketball fans should check out Three in the Key, next appearing on July 13.