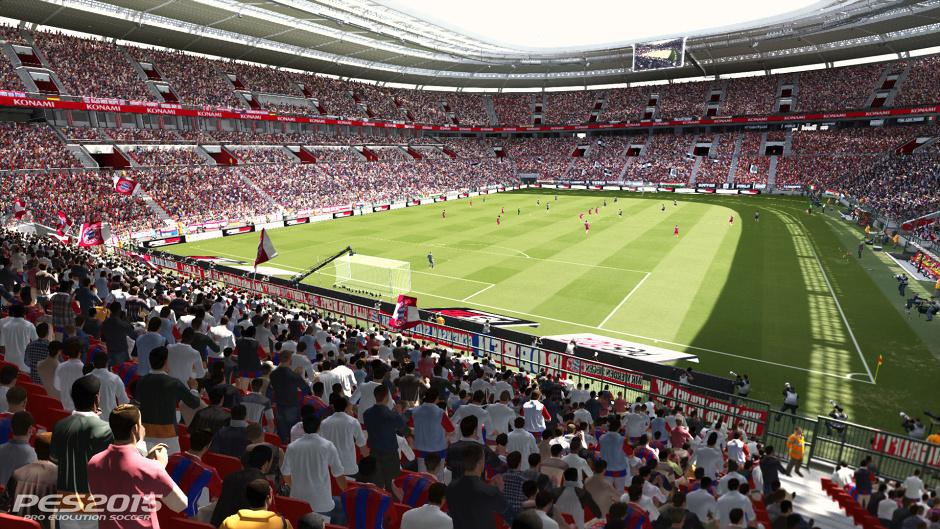 So real you can almost smell the hooliganism!

The controls are quite detailed and complex. It’s like the game designers tried to fit the entire range of physical possibilities for the human body into a 16-button game controller. This feat is, of course, impossible, and leads to a lot of confusion — for example, you can press “A,” press and hold “A,” or tap “A” twice to make three completely different moves. So, yeah, the buttons are super sensitive and the learning curve is steep.

It’s probably not too much of a head-scratcher if you’ve played this type of game before. For novices, however, the skills training is highly recommended as you’ll have the chance to run through over 20 moves rated beginner to expert. This additional practice will give you smoother gameplay between individual players on your team.

Visual images are clean and sharp on the Xbox One. This is definitely one of those areas that pays off for player engagement. Honestly, it’s just cool to walk into a stadium for skills training. Individual blades of grass are gently swaying and the ball looks like it’s going to pop off the screen. The details are sweet, with shadows, a cacophony of background voices and sounds echoing through the stadium, and a very fast player response to all of the controls (including emotional responses, such as clutching one’s head in the agony of a lost opportunity).

Licensed use of professional soccer players will give footie fans something to smile about, too. The images, playing tactics, and responses of players are set to match the pros, so it’s a very immersive environment.

The menus present in an easy-to-navigate, visually appealing style at both the meta-level and on the game level. In fact, for Xbox One users, the menus will be very familiar, because they are in exactly the same style of visual tiles used to navigate the Xbox. The menu cursors of previous editions are gone, the frame rate holds up well during slow-motion replays and the facial expressions are clearer than ever. These are all welcome improvements for the PES series.

The benefits of a high-profile game like this come through in the audio. Current top 40 pop hits play during transitions and Jon Champion gives the commentary a true pro’s touch. The crowd noise reaches a realistic swell for the kickoff and is well planned and responsive throughout play. There is a nice, even sound quality throughout the game with no abrupt changes in volume.

After all the work that went into such a sweet audio-graphics package, it’s a shame to have the overly complex controls make PES’ gameplay so frustrating. Even with a couple of hours of practice with such a highly-responsive system, the actual gameplay is a bit of a letdown.

Trying to master an encyclopedia of moves squeezed into such a limited number of control options makes for a few exhibition matches of stilted, low-scoring games. For players that have had a bit of practice on the pitch, the combinations might flow more smoothly. Plus, avid soccer fans that play and have watched a number of games will have a deeper understanding of each team’s strategies.

With enough time and practice, however, even the most uninitiated players will find themselves won over by the game. The controls become intuitive and preferred combinations of moves will flow more freely. Setting up the ball and moving it down the field with a nuanced strategy takes a little more time, but PES 2015 rewards you for it in the end.

Move from offline exhibition matches into the online community and you’ll see a vast new world of potential. Online play is where the real fun is, as previous online options have been expanded in a number of ways. There are numerous online competitions and divisions that keep track of individual, team and league stats. You can also compare to teams in the real world or choose to update stats throughout the season.

This is the big leagues of soccer. If you want to play Pro Evolution Soccer 2015 be prepared to spend some time mastering the controls and studying the pros. If you have a pro team you follow, like to keep track of player and team stats, and want to be rewarded for some well-planned, strategic play, this is the soccer game for you.

For the skater, the Wii remote and nunchuck are both put into a hockey stick attachment, with the nunchuck up top and the remote at the bottom. The nunchuck analog controls your skater, though you can leave this alone and let the computer control your skating. The stick is moved to simulate shooting — a quick flick for a wrist shot, a small wind-up for a slap shot. The “A” button passes the puck, and the “Z” button offers a speed burst. You can also use the stick to check by doing a cross-checking motion, which is obviously illegal in all levels of hockey. That’s right folks, EA Sports is teaching our youth to be dirty hockey players.