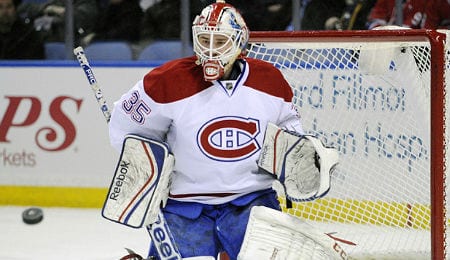 Dustin Tokarski is making the most of his starts. (Gary Wiepert/The Associated Press)

Dustin Tokarski, G, Montreal Canadiens (ESPN: 2.3 per cent; CBS: 14 per cent): Tokarski doesn’t receive a lot of playing time, but that just comes with the territory when you’re backup to Carey Price. Of course, it didn’t help that Tokarski stunk it up at the end of November, earning a Dud of the Week in the process. However, notwithstanding that hiccup, when he has played this season, he’s been very solid. Through eight games in 2014-15, Tampa Bay’s 2008 fifth round pick has a 4-2-1 record, a 2.23 goals against average and a .924 save percentage. Tokarski got in one game in Week 12, stopping 36 of 37 shots (including a sweet glove save that you can see in the video below) in a 2-1 shootout win over Florida while collecting a 0.92 goals against average and a .973 save percentage. He’s the Fantasy owner’s perfect “Black Ace” in goal, but be careful – he’s only made one start since November 29.

Mikko Koivu, C, Minnesota Wild (ESPN: 37.7 per cent; CBS: 48 per cent): Minnesota’s captain started out the season on a very poor pace, but he’s been doing much better lately, partially because of the emergence of “Angry Mikko”, a fiery beast which cannot be stopped. Okay, maybe we’re going a little too far there. Still, even watching on a TV screen, it’s unnerving when the Wild pivot gets worked up. Through 37 games this season, the 2001 sixth overall pick has six goals and 20 points, including a goal, four points, a minus-1 rating, four penalty minutes, three power play points, 14 shots on goal, 50 face-offs won, a hit and three blocked shots last week alone. Koivu will certainly contribute to your Fantasy team, but will the fiery Finn be enough to lift Minnesota?

Vernon Fiddler, C/LW, Dallas Stars (ESPN: 0.3 per cent; CBS: 0 per cent): Fiddler may have just four goals and 12 points through 37 games, but he’s coming off a solid week, including a two-goal outing against Minnesota on Saturday. In total last week, he collected three points, a plus-3 rating, seven penalty minutes, a power play point, nine shots on goal, 19 face-offs won, three hits and two blocks. Fiddler is worthless in Fantasy leagues 10 or less teams, but you might consider picking him up in larger leagues in which there aren’t a lot of options on the waiver wire.

Frans Nielsen, C, New York Islanders (ESPN: 25.1 per cent; CBS: 46 per cent): Nielsen started out the season strong, but his production dried up fast. However, with four points in the last three games, is he starting to heat back up again? In Week 12, Nielsen collected two goals, four points, a plus-3 rating, two penalty minutes, two power play points, a game-winning goal, three shots on goal, 11 face-offs won and two blocked shots.

Erik Cole, LW/RW, Dallas Stars (ESPN: 1.1 per cent; CBS: 3 per cent): Cole may only have seven goals and 15 points in 36 games, but he has five points in his last six games. He’s far from an ideal source of primary scoring, but is still a solid option if you’re looking to fill out your Fantasy roster. Last week, Cole managed a goal, three points, a plus-4 rating, two penalty minutes, two power play points, a shorthanded point, four shots on goal, two face-offs won and a solid 15 hits. Not bad.

No. 1. Kari Lehtonen, G, Dallas Stars: We’re telling you, the RotoRob.com role reversal curse is a real thing; after this week, we’re expecting a handsome looking fruit basket from last week’s No. 2. “Dud,” Lehtonen. The Dallas netminder had three wins, a 1.00 goals against average, a .964 save percentage and a shutout. Come to think of it, he can also include a meat and cheese platter for beating our NHL Editor’s Wild.

No. 3. T.J. Oshie, C/RW, St. Louis Blues: Speaking of thrashing the Sharks, Oshie registered a hat trick and four points Saturday, bringing his weekly total to five goals, seven points, a plus-4 rating, a power play point, a game-winning goal, 13 shots on goal and seven hits. It’s amazing what can happen in just one game.

No. 1. James Reimer, G, Toronto Maple Leafs: Reimer found his way into three games last week, posting an abysmal 4.41 goals against average and a save percentage of .886.

No. 2. Jhonas Enroth, G, Buffalo Sabres: The Sabres are back to their losing ways. In three starts in Week 12, Enroth had no wins, a 4.01 goals against average and a .878 save percentage. He does have a .909 save percentage on the season, but there are better goalies available in your league.

No. 3. Pekka Rinne, G, Nashville Predators: Rinne is currently in the midst of one of his best seasons, but that doesn’t mean he’s immune to the occasional bad week. Last week could certainly be considered a bad one. Though he did manage to collect two wins, Rinne also chipped in a 3.89 goals against average and a save percentage of .880. Relax, he’ll bounce back sure enough.

And that’s it for our coverage of Week 12. How did you do? Tell us in the comments section below.