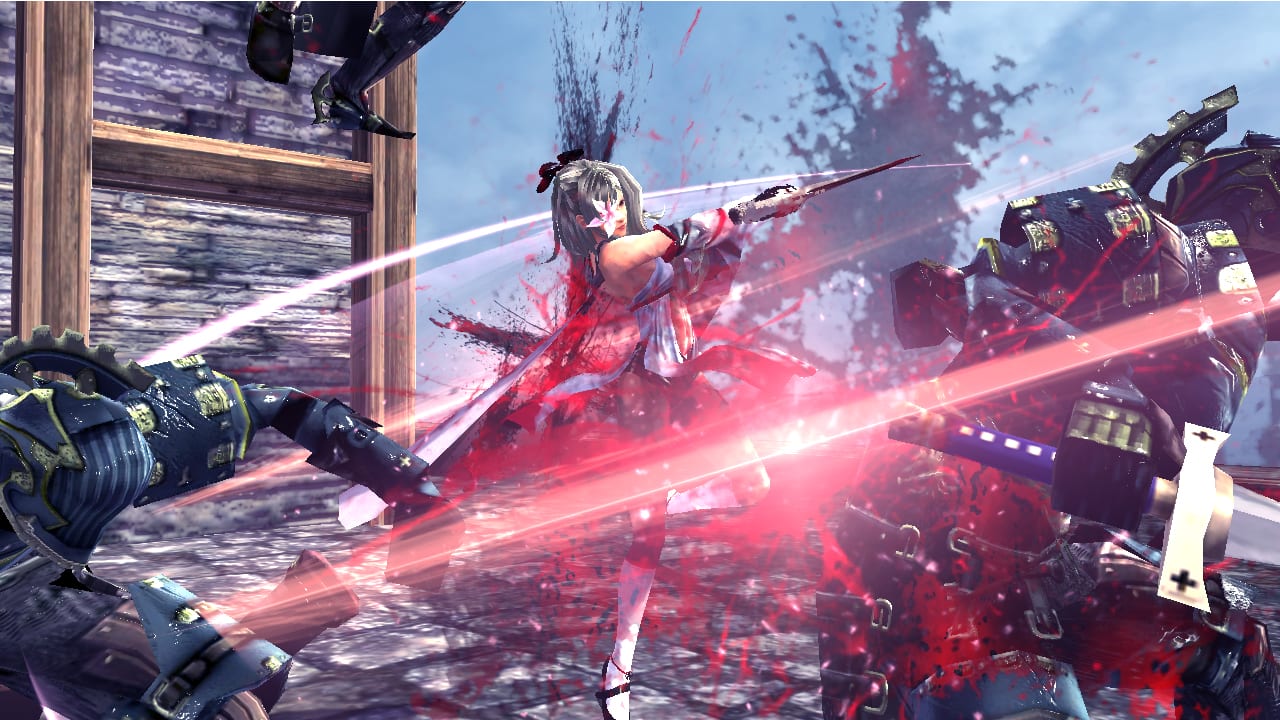 Splish splash I was takin’ a bath… in their blood!

Drakengard 3 makes us sad. Not because of its subject matter or play style, but because of what the game could have been. This game has all the makings of a blockbuster: dragon combat, tons of weapon styles and even a decent story. And yet, the flaws are too egregious to be ignored.

Certain aspects function wonderfully well while others fall a little flat. One of the best additions is the ability to instantly change weapons in real time. Very few games allow for such seamless transitions. Unfortunately, combat often feels a little clunky and unresponsive, especially when using a large weapon.

Dragon combat has far more issues than any other mode. The response issues we already addressed are exacerbated to the point of being unplayable. Also, the game does not allow the player to invert the flight controls. As a fan of inverted controls, this gave us a considerable amount of trouble. It seems like the dragon never has enough room to maneuver, resulting in lots of wall collisions. Hitting walls is made even worse by graphical problems, which are discussed below.

The only way we can think to describe Drakengard 3’s graphics is inconsistent. When we watched an online trailer, we were very impressed with the high level of detail and clarity. Upon viewing the same footage in the game’s introduction, however, much of that clarity is lost. Some cut scenes look spectacular while others simply look unfinished. This unfinished quality also extends to level design as many are bland and flat, sporting poor texturing.

Two other problems also become apparent in regards to the graphics. The game is plagued by lagging and low frame rates. This happens most frequently when too many objects or explosions are rendered simultaneously. However, this can also happen during cut scenes.

The camera is easily the worst part of the entire experience. Never fight near a wall, otherwise the camera will glitch through it or flip around wildly. Sometimes the latter happens in combat anyway, regardless of your proximity to walls.

For all the graphical faults, the sound manages to save face. The opening theme is awesome — great writing and great performing. Some synth can be found in later parts of the game, but it’s good quality. Voice acting is also very good. Our only issue here is that the voices match the lip flaps very badly. Think English dubs of vintage Godzilla movies.

As Zero defeats her foes, she gains companions, or “disciples.” These larger-than-life characters are obsessed with sex in some shape or form. Decadus gets turned on by the mere mention of receiving physical pain and Octa literally stops in the middle of a battle to measure a centaur’s penis. Yeah… Sometimes the crass comedy works, and sometimes it doesn’t. The dramatic portions are much more believable and effective than the comedic sections.

The missions are pretty much all the same: Fight your way up to the mini-boss or Intoner and kill it. What keeps things interesting are the many delicious ways to slaughter your enemies. Zero has four different weapon types at her disposal — swords, spears, combat bracers and chakrams. There are tons of unique weapons in each category, each with its own power level and size. Additionally, each weapon can be upgraded, which improves attack power and may change the weapon size. Even with all these options, killing the average adversary gets repetitive pretty fast.

Side quests are also available to supplement the main quest. Unfortunately, only two types of side quests are offered — item collection and survival tournament. Oddly, we found them significantly more difficult than anything in the main quest, primarily due to the time limits. These quests reward the player with money and occasionally items; we highly encourage completing these as they make the rest of the game much more manageable.

A strange glitch is present in the survival tournament. When in combat, an enemy will sometimes get stuck to the back of your character model. It will no longer attack, but the level cannot be passed until this rogue soldier is killed, which can be tricky.

In order to help you murder your enemies in cold blood more efficiently, Drakengard 3 includes a targeting system. Unfortunately, its execution is less than perfect. Since opponents rarely attack alone, targeting the desired enemy is nearly impossible. Also, whenever the player enters Intoner Mode, which is a hyper mode of sorts, the game will automatically lock onto the nearest enemy. This can be a major problem in the side quests when the goal is frequently something other than enemy slaughter. We often failed these quests because we were forced to engage the opponent instead of completing our goal.

As far as difficulty is concerned, Drakengard 3 is not particularly challenging, except for the side quests. Plus, most of the game’s difficulty regrettably lies in dealing with its faults, notably the camera and targeting system.

Drakengard 3 is a surprisingly long game, especially considering its strictly linear nature. We sunk quite a bit of time into it only to discover the multiple endings. These endings, while a little confusing, are pretty darn cool once everything is revealed.

Drakengard 3 came unbearably close to an incredible experience. If we were part of the development team, we would call this a terrific first draft, but sadly, a first draft it’s not. The lack of polish and consistency throughout the game overshadows its strengths. Hopefully, another installment in the Drakengard series will enable the developers to create a more finalized product.