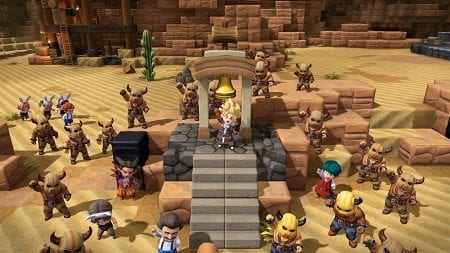 When Dragon Quest Builders released back in 2016 it finally got us to truly buy into a sandbox builder in a way that Minecraft never did, making it both one of the most pleasant surprises and enjoyable games we played that year. Fast-forward to the present and Square-Enix is unleashing Dragon Quest Builders 2 on audiences. Whereas the last one caught us off guard, this time we’re going in with high expectations.

Our primary complaint with the original was the odd way it handled, and unfortunately little has changed on that front. Combat is still a bland affair with fights taking on one of two forms: stand there and mash the attack button, or stand there, mash the attack button and periodically run away to avoid high-damage attacks. There’s no block or evasive roll, and it’s debatable if the techniques you learn are more potent than the standard spamming of regular strikes. On the bright side, at least weapons no longer degrade and break.

Building is where the game shines, even if the physical act of placing blocks can feel touchier than we would’ve liked. This is especially true when laying blocks on the same level you’re at, since having your character look down or up essentially locks them into place allowing for much quicker progress. Switching to the first-person view can be helpful with this, but it definitely strips away some of the game’s visual charm in the process. Then again, you’re free to switch back and forth as often as you’d like.

As with the first game, and countless others out there, the camera can become an issue whenever your exploration takes you into tight quarters. There is a way to manually zoom in and out, but that doesn’t always do the trick, and even when it does you may need to adjust again in short order. Given that most of the game takes place in the open, however, it’s a minor inconvenience.

There’s a definite old-school feel to Dragon Quest Builders 2 with character and monster designs that will be instantly familiar to any Dragon Quest veterans. The game’s various islands have unique terrain, which helps keep the process of building settlements fresh and interesting. The actual structures, produce, animals and more all adhere to a cutesy style that gave us flashbacks to the heyday of the Harvest Moon series.

By and large the audio side doesn’t move the needle, though musical cues will help clue you in to some information (such as when you’ve left the safety of the village). It’s fine, but some of the sounds that NPCs make when “speaking” can be downright annoying — and honestly, just sitting here and thinking about the game, those noises are what really stand out, which isn’t great.

As a nameless builder, you are considered a threat and troublemaker to the world’s inhabitants that live under the shadow of the Children of Hargon, a group that believes destruction is the way of the world and any creation is taboo. After a brief tutorial section aboard a ship, you wash ashore an island and find an amnesiac man named Malroth, who decides to help you in your quest to rebuild.

There are some cool moments here and there, but for the most part it’s a pretty straightforward tale that seems aimed at a young audience. That extends to the dialogue as well with most conversations containing some variation of, “oh you’re a builder? that’s blasphemy… say, how about I join you?” You’ll get the occasional menacing line, though even those are usually laughed off a moment later. While we understand targeting a younger demo, we certainly could’ve gone for more serious tones.

Despite its shortcomings in story and combat, Dragon Quest Builders 2 succeeds because of how enjoyable building and exploration (the other two pillars) are. The game is constantly throwing missions and side quests at you, which keeps you with ways to progress at almost all times. Conversely, there’s rarely any sense of urgency, so if you prefer to walk around or obsess over the minutia of a settlement for a couple of hours you’re free to do so.

There’s loads of content to wade through as well, as in addition to the building elements you’ll earn experience to level up — this applies to both you and Malroth, and it also unlocks new recipes for weapons and gear — and square off with proper bosses. There are dungeons to explore, puzzles to solve, powerful optional creatures to face and special items and recipes to find. This is much more than just a building game with RPG elements tacked on.

That being said, building is where the game shines the brightest. While you’re free to create, your growing settlement will also look to you for help building specific things to address their needs (e.g., a bathroom, fields for crops, somewhere to eat). Do this and you’ll earn gratitude points, which can then be used to upgrade your settlement, attracting new residents and unlocking a bunch of new recipes in the process.

It’s an enjoyable loop, though the game can be a bit stingy with the acreage that’s designated for your town. Although you’re free to build anywhere you’d like, the game (and your citizens) only recognize and use a structure that’s built entirely within certain limits, which does put some restrictions on how you lay out your settlement. Monster raids and the emergence of ground-ruining spores that you must destroy also overstay their welcome.

Dragon Quest Builders 2 has its shortcomings, but it does so many things well that those are easy to forgive. While we would’ve enjoyed better combat and a more engaging story, we still had an absolute blast building and exploring its world.

Although it won’t go down among the best RPG stories, Dragon Quest XI does more than enough with its plot to keep you moving forward, and the constant metering out of rewards and loot encourages no shortage of secondary exploration and completing of side missions. There’s tons of content here, a good bit of which opens up after you finish the main game.

Our story picks up after some very bad things have gone down in Alefgard, leaving the world little more than a smoldering ruin of its former greatness. Into this situation steps “The Builder” (that’s you), a non-hero that nonetheless possesses the forgotten ability to build, and it is you that is destined to lift this world up and return it to prominence.