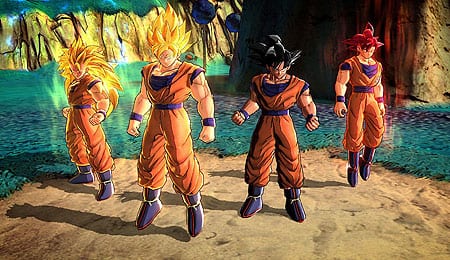 Remember when turning into a Super Saiyan was a big deal?

Dragon Ball Z is a show we have very fond memories of… until we start watching it again. The ideas it has are as epic as the fights, but then it forces hours of pointless filler on its audience to get to the good stuff. That is a good reason why video games are a better medium for it. All the senseless violence without pointlessly shoehorning what Hercule is up to or other crap no one cares about. Unfortunately, the newest game, Dragon Ball Z: Battle of Z, is not the best way to enjoy the series, either.

Awkward would be the best word for the controls. The game relies heavily on a targeting system so you can focus on whichever character you want to damage. Without targeting, it is incredibly hard to hit who you want, and most of the time you’ll be punching and kicking air. Switching between multiple targets can also get pretty wonky, as it is hard to tell where everyone is during a match, and therefore who you want to be aiming at next.

Pulling off special attacks is fairly easy, either by using a simple combination of buttons or tapping a specific spot on the touch screen. We are normally against switching between a touch screen and buttons, but Battle of Z offers one of the best ways to handle it.

What brings the controls down, however, is the movement. Getting to a faraway enemy either leaves you very exposed as you dash toward them in a way that still feels too slow, or you take quick, but way too short, bursts. As the arenas tend to be very large and attacks knock both you and enemies very far back, this gets incredibly annoying almost immediately.

Ever since Budokai 3, Dragon Ball Z games have done an excellent job of looking like the cartoon and Battle of Z is no exception. They are not quite on the same level as South Park: The Stick of Truth at mimicking the source material, but no DBZ fan will be disappointed by its visuals. However, there are a few issues, particularly that the character models can look really jagged when the camera zooms out, similar to the first inFAMOUS game.

Voice work uses the newer voices, which will be fine for fans keeping up with the newer Kai series. For those used to the older ones, however, many characters (particularly Gohan and Frieza) will sound really weird. Looking objectively, however, they do well for the most part, except for young Gohan. He just sounds annoying.

Music is pulled straight from the cartoon so it is naturally quite good. They sound exciting when things are supposed to be exciting, which is pretty much 90 per cent of this game. Sound effects ooze violence at every punch, while making ki moves feel very powerful, particularly when the character’s special attack lands a perfect hit.

Battle of Z is set up very differently from your typical fighting game. Rather than have the usual one-on-one bouts, the game instead focuses on having teams fight against each other. This is a neat idea, in theory, but it is plagued with many problems that get in the way.

At its core, using the attacks feels satisfying. Punching and kicking feel exactly how they are supposed to, and ki attacks have a great deal of gratification in landing them. The game just does not use either of these well. For instance, regular melee attacks, which are set up as the bread and butter of combat, inflict moderate to very little damage to enemies, especially compared to how much they do to you.

In fact, if you are facing one of the big villains, expect to get over two-thirds of your health taken away from just one of their combos. This really contradicts the fighting game setup, which is designed in a way that does a better job of making things equal.

The teamwork mechanics are supposed to help this, but the friendly AI is very hit or miss. Sometimes they would be healing when they are supposed to be fighting with the player in perfect harmony. Other times, they just fly around doing nothing, even hovering above an unconscious ally without healing him.

Co-op can rectify this, but like the AI, is very dependent on who joins your game. With the right people, you can theoretically have a better experience, but in our playtime we could never get a group that wanted to fight in synergy, which the teamwork mechanics are dependent on.

The worst offender, however, is how the game liberally has any downed character be immune to damage. Get hit by three attacks then fall down a little? Immune for half a combo. This creates an incredibly one-sided battle system toward the enemy, as you will need to land multiple combos, while they only need to land a few. It really cuts how much damage you can potentially do and replaces much of the fun with frustration.

The biggest Dragon Ball Z fans that are not sick of watching Goku beat Frieza or Gohan finish off Cell for the umpteenth time will find some enjoyment from Battle of Z. Even then, however, we would only recommend it if you know you can get a good group of friends to consistently join you. Otherwise, you are probably better off with one of the PSP entries.