Dear RotoRob: Let the D-Train Roll On By 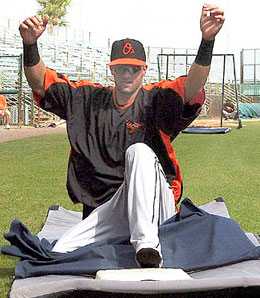 Even if the D-Train is being dangled, you’ve got to hang on to Nick Markakis.

You gave me great advice before, so I might listen to you again!

I have been offered Dontrelle Willis for Nick Markakis. Is this is good trade for me?
‘
My other OF are Ichiro Suzuki, Curtis Granderson, Rocco Baldelli, Chris Duncan, Shawn Green, Luis Gonzalez, Jack Cust, Garret Anderson and Aubrey Huff.
‘
My SPs are Johan Santana, Matt Cain, Daisuke Matsuzaka, A.J. Burnett, Rich Hill, Randy Johnson, Jason Schmidt and Ervin Santana.
‘
I can start five SPs each week and it’s a points-based keeper league.
‘
Thanks.
‘
Paul

Don’t just listen to our advice, take it, and then tell others about it and visit our sponsors while you’re at it!

I would have to say no to this deal. You’re using Santana, Cain, Matsuzaka, Hill and Johnson as your pitchers right now I hope. Keep faith in Schmidt and Santana, but bench them until they get healthy/get it going. That being said, Baldelli is back on the DL, so your OF takes a hit there again this season. Green and Gonzo are old and nearing the end (although Green is hot this season).

Although buying low on Willis has its appeal, I’d keep Markakis as I love him long term. Your pitching is good enough to keep you just fine for a few years, but your OF is getting a little long in the tooth.

We need your take on a trade that was just executed in our 10-team, 5×5, H2H league. The first-place team has six closers (including Huston Street, Brian Fuentes, Mariano Rivera, Salomon Torres and Tom Gordon) and one second baseman, Ian Kinsler. The last place team has two closers (Trevor Hoffman and J.J. Putz) and five second baseman (Robinson Cano, Ryan Theriot, Howie Kendrick, Ty Wigginton and Orlando Hudson). They made a trade, Rivera for Hudson straight up. The league thinks there is collusion involved, so we need am independent third party to judge. Please let us know your thoughts on the trade and whether it is fair or not.

Love your articles! Thank you!

Fantasy wise, no. So, would I vote to veto? Yes!

The guy with two closers isn’t getting fair market value for his 2B. The guy with five closers is giving up someone that is really one of the worst starting closers in MLB right now for one of the best second basemen in baseball right now.

Collusion? Only if you think the guy with the 2Bs is tanking on purpose. However, I don’t see it. I think the second baseman guy overpaid for a closer. The saves he adds won’t be worth the price he pays for the ERA and WHIP hits he takes. Rivera is just old now and his best years have passed him by.

I’d veto, but it is impossible to prove collusion unless someone admits it. Just ask Barry Bonds about his (alleged) steroid use.

Dear RotoRob,
‘
How’s it going?’I am in a quandary because I am in a fantasy situation in which there are no clear cut starters for two UTIL spots. I generally like’to go into a season where I have surefire starters’and don’t play match-ups.’Right now I have Mark Teahen, Pat Burrell, Adam LaRoche, Hunter Pence and Dan Johnson fighting for those’two spots.

How would you rank those five’hitters since it seems like they are all heating up right now? I have also considered benching Garret Atkins at 3B for the time being and starting Teahen there to make the decision for those two UTIL spots easier.

I think I’d run with Pence and Teahen right now for the Util spot. Both are white hot, while LaRoche and Johnson have cooled off right now. Burrell is just horrible and I have cut ties with him on the one team on which I owned him.

Thanks RotoRob! One other question: what are your thoughts on the trade I just pulled off in this’same league: Felix Hernandez and Al Reyes for Manny Ramirez? It’s a 12-team, 5×5, Roto league. I am already very deep in pitching. My other starters are Brandon Webb, John Lackey, John Smoltz, Cole Hamels and Jamie Shields. The only problem is that I am essentially punting saves.
‘
Liam

I never like doing two-for-one deals because you tend to lose two starters and get back one. Hernandez is, well, King Felix. When you have a 2.77 ERA and a 1.22 WHIP, it doesn’t get much better than that. Reyes is looking near unhittable right now, but he is a Devil Ray (and besides, there’s talk he may be dealt, perhaps winding up in a set-up role somewhere). Man-Ram is Man-Ram, i.e., just one of the best pure hitters in baseball.

I guess if you have the arms to lose, and are willing to just take the one point for last place in saves, Manny is a good hitter to try to win the RBI and HR categories with. All in all, I don’t know if I would pull the trigger on that deal, but I also don’t know that I would outright reject it either. If I had to pick one side, I think the deal is close, but Manny is a better hitter than just about 95 per cent of the league anyway. Not too bad, but losing Felix could hurt more than you think.