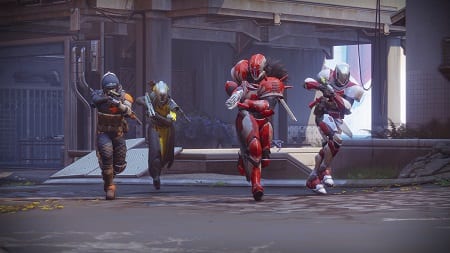 Sun’s out, guns out.

Whatever Destiny was when it launched back in 2014, it had been tweaked and advanced dozens of times since then, the target of Bungie’s obsession with getting it right. Some players appreciated its efforts, others did not. Such is the modern world of gaming.

All but the most devout of skeptics will acknowledge the game ended in a better place than it began, and the lessons learned along the way make Destiny 2 a much more refined product, albeit one that bears a stronger resemblance to the original than many sequels would dare.

While other shooters have had specific elements we’ve enjoyed more than Destiny, nobody brings it all together any better. Everything feels tight and precise, regardless of weapon class, and yet at the same time the various gun types play differently. Riddling your foes with bullets feels chunky and satisfying, and precision shots rival even Gears of War‘s head-popping sniper rounds for pure bliss.

A handful of vehicular sections have been added this time around, providing not only the change of pace that the first game lacked but also that feeling of being an overpowering bad ass — the same thing Bungie captured years ago with Halo‘s Scorpion. They handle well, and we’d be on board for some additional tank time in future DLC.

Destiny 2 doesn’t represent a major improvement over its predecessor in terms of technical prowess, but the game feels markedly more diverse out of the gate. Your time spent on Earth is limited, and each of the planets you visit has unique landscapes that help battle the type of terrain fatigue you got while patrolling Old Russia for the 846th time.

One of the game’s disappointments, however, is a lack of new enemies to battle with the Red Legion essentially being a reskinned version of the Cabal. It would’ve been nice to have something truly unfamiliar to do battle with. At least weapon and armour variety (and customization) remain top notch.

About the only change of note on the audio side occurred years ago when Nolan North took over for Peter Dinklage as your wise-cracking Ghost. Beyond that, the Fireteam returns unchanged, though it’s worth recognizing how well the two primary villains are acted, as well as the damaged A.I. Failsafe. The music, traditionally one of Bungie’s strengths, delivers again.

Your absence from the Light is thankfully brief, but even with your powers restored there’s much work to do to free the people of Earth from Ghaul’s oppression. It’s within this storyline that the game separates itself most from the original. Rather than repetitive missions with exposition left to be explained by your Ghost, Destiny 2 offers cut scenes, story and character development and a considerably more diverse selection of mission types.

Is it an amazing story? No. Within the confines of an always-online world, however, it does more than enough to keep you moving through a fairly meaty campaign. Storyline progression also serves as a means to meter out the game’s robust selection of secondary activities such as side quests, patrols, strikes, PvP multiplayer and much more.

Locations feel more alive than ever thanks to a near-constant stream of public events, high-value targets and hidden “lost sectors” that provide opportunities to earn new gear. Each planet features its own custodian that will give you goodies for collecting tokens earned by completing said events, creating even more incentive to get involved and explore.

Well, to a point anyway. Eventually you’ll become powerful enough that these smaller payoffs no longer push your Light level upward, meaning you’ll need to go after rarer and more challenging events — like the Leviathan raid or Nightfall strikes — which require a more substantial time investment and the ability (and willingness) to work well within a team. That remains an issue for less social gamers.

Of course, once you’ve had your fill of cooperative gameplay you can jump into the Crucible for the usual assortment of PvP matches. It’s intense and generally enjoyable, though the amount of damage everyone can absorb degrades some of the action into contests of strafing attrition.

One nice change to the Crucible, as well as the cooperative Vanguard, is that there’s no longer a cap on your weekly rewards. Considering that the constant collection of new weapons and gear is at the core of the Destiny universe, it makes sense to allow players to make it a perpetual chase, rather than arbitrarily stopping it each week.

There are still issues to be ironed out, including a better variety of public events and the way shaders are now used. Unlike the original, shaders are now single use and can be applied to individual weapons or armour pieces. Theoretically it allows for added customization, but in practice you’re apt to horde your shaders since today’s treasured chest piece can be made obsolete moments later.

Destiny 2 feels like the logical progression of the original, polished and improved in the three years since its launch. It doesn’t offer many new tricks, but it’s getting ever closer to perfecting the ones it has.