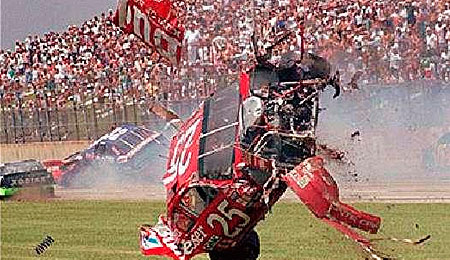 James wonders whether avoiding this fate qualifies you as an athlete.

Okay, so the big news this week has been Dale Earnhardt Jr. leaving DEI, crossing over and replacing Kyle Busch in Hendricks motorsports race team. I know, I know…you are asking “Why am I reading about NASCAR on a fantasy sports web site?” Well, Yahoo operates a fantasy NASCAR game each year, and I have even had a team or two in them.

Now, I have friends who are NASCAR fans and they say either you love it or you hate it, either you get it or you don’t. I fall into the “don’t get it” category. All NASCAR is and ever will be is a bunch of rednecks, sitting in a souped up sled, going in circles, counter clockwise! “They’re going left…another left…still going left…another left…and, wait, what’s this? Yet another left…” Here is why NASCAR is not a sport: The driver does not directly affect the performance of the equipment he uses.

If Little E pushes the gas peddle down to the floor, the car will not go any faster than it would if I floored it. The cars are doing all the work and the driver just controls them. The whole premise for NASCAR is that all the cars are built to the same specs and no driver or team has an unfair advantage over the others. So, you either have to be a slick cheater or get really lucky during the race. If all the cars are built the same, then it depends more on the pit crew to get you in and out of the pits than it does on the driver to go in circles. Sure, it is hard to sit for three hours and 500 miles behind the steering wheel, but it is no different than a jockey riding a horse in the Kentucky Derby. The jockey doesn’t affect the outcome of the race any more than the guy sitting behind the wheel of a car.

I will give some love to Indy car racing because the drivers do have to navigate turns, slow down, and speed up at different points of the race. The car still does all the work, but making the turn, shifting when you need to shift, and breaking at the right time can actually increase the chances of you passing another driver. But in NASCAR, you pretty much drive straight, then slow down slightly to turn left, then speed back up and do it all over again. I don’t think there is true athletic skill in race car driving because the car does 85 per cent of the work while the driver just controls it.

So, tell me this sports nuts, is NASCAR/Indy racing an athletic sport or just a hobby? How can the driver affect the outcome of the race other than rubbing other cars as he circles the track? Does driving a car and avoiding hitting other cars make you an athlete? My take on it is that it’s all about the car and its dynamics, not the driver behind the wheel. Put the driver in a slower car and he loses; put him in a faster car and he wins. You can’t put the best driver in a slower car and see him win. On the other hand, put Michael Jordan on a lesser team and he could still carry them to wins.

Let the flaming begin. But first I have to drive to the grocery store to pick up a few things. It’s just a couple of blocks south of me, but it will take me 15 minutes to get there because I don’t do right-hand turns. If I make it there and back without crashing does that make me an athlete? Or do I have to add an extra element of skill by eating a messy burrito and talking on my cell phone at the same time?