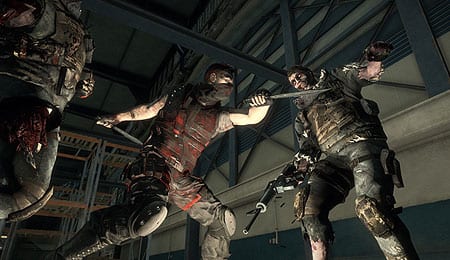 Even though we wouldn’t put Dead Rising 3 into the pantheon of launch titles, you could certainly make a strong case it was the best console exclusive for either the Xbox One or PlayStation 4. Now, some two months after launch, the first of four promised add-ons — collectively known as the “Untold Stories of Los Perdidos” — has arrived.

Dubbed Operation Broken Eagle and priced at US$9.99 (or included in the Season Pass, which costs US$29.99), our first untold tale follows spec-ops soldier Adam Kane. He’s under orders to locate the President as she was making a speech in Los Perdidos when the shit hit the fan. There’s very little in terms of story here with only a couple of cut scenes bracketing the typical sandbox combat, and what’s present is about as tangential to the main story as it can be.

Right off the bat, there are a few things that should be pointed out. One, this map is identical to the one you explored with Nick Ramos. There are no new locations and only a handful of collectibles scattered about. Two, all of Nick’s upgrades carry over — combine that with the fact that are no boss fights in this DLC and you can guess at the relative lack of challenge. And third, there is no multiplayer function here.

In addition to the lack of challenge, there’s also a paucity of content. Operation Broken Eagle’s primary mission arc can be comfortably completed in around an hour, and even when you take into account the two unique types of side missions — locating your squad mates and collecting their dog tags (assuming they’re dead), and smoking out zombie dens — you should still have little trouble finishing everything in less than two hours.

At least there are some additional weapons and a new kickass vehicle on offer, all of which can be taken back to the main game for additional zombie-killing shenanigans. Plus, of course, this is simply more of what made Dead Rising 3 fun to begin with. You still wade through hundreds of walking corpses on foot or in vehicles, and the constant nighttime setting at least helps keep things moderately tense even though you’ll likely never be defeated.

Operation Broken Eagle adheres to the credo that if some is good, more is better, as you do the exact same things in the DLC that you did in Dead Rising 3. So while we certainly would’ve enjoyed a longer, more varied experience, at least your time spent here should be fun.