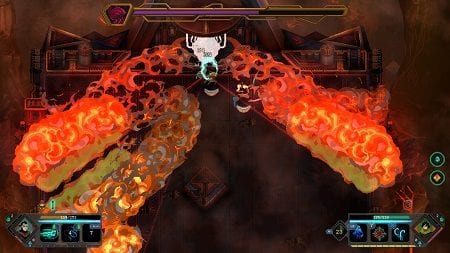 Children of Morta contains all manner of pixelated goodness.

With few exceptions, we’ve never really warmed to the roguelike (or lite) genre in which progress is typically cast aside upon death. That being said, there was something about Children of Morta, the latest release from developer Dead Mage, that caught our attention so we decided to take the plunge, albeit a good bit after launch due to other commitments. Time to find out if it was worth circling back for.

There are several interesting things about Children of Morta, but arguably its biggest deficiency is that the action isn’t all that compelling even as more and more characters are unlocked. The game does make one very smart decision, however, allowing you to use a button for your base attack or play it like a pseudo twin-stick game as both a ranged and melee fighter. We found the sticks to be a much more enjoyable, intuitive way to play, and things wouldn’t have held up nearly as well without that option.

While the combat isn’t great, that doesn’t mean it’s bad. We just would’ve preferred a little more evasion relative to kiting and using AoE attacks to wipe out foes. Once you get a feel for how the game approaches enemy encounters, odds are you’ll adopt a pretty similar set of tactics whether you’re fighting as a ranged or melee character. Yes, fighting as an archer does create a different experience than fighting as a monk, but it doesn’t fundamentally change things. Given that we’ve always had an affinity for hack n’ slash, your mileage may vary.

It’s obvious a lot of love and effort went into crafting this game, and it’s impressive how much emotion it manages to convey from its simplistic pixels. The Bergeson homestead is probably the highlight in that regard as each time you return from a foray into the dungeons you’ll see the family going about their daily routines. Environments and enemy design are solid, though the variety could’ve been better as you’ll face a lot of the same foes throughout.

Most of the audio is strong as well, including a comforting narrator that clearly lays out what is happening and a quality score to accompany your adventures. Ambient and monster sounds are alright, though whoever signed off on Lucy‘s incessant yelping as she launches fireball after fireball should be barred from decision making in the future — it’s so bad that we muted the game when playing as her.

In one sense, Children of Morta tells a pretty narrow story: the Bergeson family is concerned about corruption spreading throughout the land and sets out to stop it. Despite that limited scope, the game does a great job of sprinkling in details about the Bergesons as you play, which really helps make the narrative a strong suit, especially for a rougelike.

Basically, every time you return to the house, whether you’ve been defeated or cleared an area, some new narrative thread will be waiting for you. For a while these threads generally end in a new playable character being unlocked, but there are so many tiny details to learn that you feel like the story is constantly moving forward, even if you get stuck. You’ll also encounter events during dungeon crawling that will affect your home, such as rescuing a wolf pup, then subsequently finding medicine to heal it and so on.

As noted, the combat isn’t the game’s strongest element, but Children of Morta does a good job of encouraging repeat visits to the fairly small selection of areas. Each of the six characters level up separately, but at various points along their growth they unlock new skills and/or buffs for the entire family, meaning the Bergesons are constantly getting stronger. Repeated use of a particular character will result in corruption sickness that limits their health, thus providing additional encouragement to use different characters.

Beyond leveling up, you’ll also be able to purchase upgrades that pertain to everyone, ranging from direct benefits like dealing more damage and having more health to more passive ones such as increasing the experience earned from killing enemies or the amount of money they drop upon being defeated. It’s not a super deep system with straightforward upgrades and limited skill trees, but it worked in keeping us coming back.

Combat loops are limited to a single area, comprised of a randomly generated layout of a set number of “floors” and culminating with a boss fight. After that, you return to the house and strike out again for progression or grinding for money and/or experience. This keeps runs manageable in terms of length, and even losing to an area’s boss never feels like a waste of time. It’s well thought out and executed.

Packed with charm and some fun ideas, Children of Morta is one of the better roguelikes we’ve played and is worth the attention of hack n’ slash and/or RPG fans.