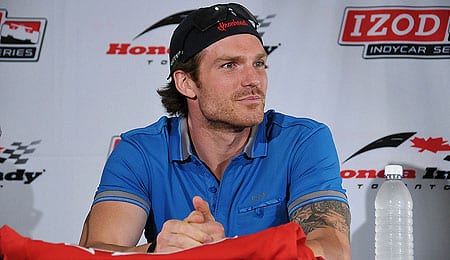 The 2013-14 RotoRob NHL Draft Kit rolls on today with the release of another of our beloved Top 10 lists. So while Tim Thomas explains why he wanted to return to the game, let’s take a look at 10 players we advise you to avoid — or at least not invest too heavily in.

It takes a big man to stick your neck out there. I take pride in what I do so let’s roll and take a look. Are you ready? Here they are.

1. David Clarkson, RW, Toronto Maple Leafs: We come out swinging hard! It just seems that people are expecting first line production out of a guy that has never topped 50 points. When a player is getting over $5 million per year for seven years, he has to step up his game. However, Clarkson is what he is. He is a skater that falls a lot, gets in the dirty areas (see video below for an example), and is streaky in every way. Sure, Clarkson will rack up penalty minutes but does he become almost Dion Phaneuf-like for the first couple of years of his Toronto contract? The expectations will weigh Clarkson down at some point.

2. Jason Garrison, D, Vancouver Canucks: Garrison scored nearly 20 goals a couple years ago and let’s just say last season did not go as well. Is he a bust this year too? It keeps looking that way. Honestly Garrison may not come close to 35 points this season despite some thinking he has to bounce back a little. Alex Edler and Kevin Bieksa are ahead of him on the depth chart, and likely points-wise as well. Hell, even Dan Hamhuis is more Fantasy relevant than Garrison. Besides, anyone who blows out a skate like he did — he literally busted one — deserves to be called a bust.

3. Dany Heatley, RW, Minnesota Wild: So Heatley supposedly has come into camp in the best shape of his career. How many times have we heard this before? Sorry, we don’t buy it. Heatley is aging and his skills have steadily declined. For some reason, projections on him are higher than they should. Heatley may drop to the second line or third as the season moves on. Will it happen before the Olympic break? Probably not. However, we don’t see the revival of Heatley that some do.

4. Ryan Miller, G, Buffalo Sabres: This could be as simple as saying it’s not 2010 anymore. The mic could be dropped at that point. Jhonas Enroth showed some signs of wanting the top job in Buffalo, so those Miller trade rumours are no accident. Buffalo has soured on Miller. Everyone knows it. It’s just a matter of time before he’s dealt as the GAA keeps going upward while the save percentage has slowly gone down. Maybe Miller cranks it up after a trade but he surely will be resting during the Olympic break. That is how far this one-time staple of American hockey has truly fallen.

5. Cam Ward, G, Carolina Hurricanes: Ward is still living in 2006 when he won the Stanley Cup. The reality is it has not gone very well since. Can Ward even keep his job this season? Anton Khudobin is no slouch and that Carolina defense will not exactly bail him out either. We’re expecting another uneven Fantasy season for Ward owners. Maybe a platoon goalie would be a better choice.

6. Niklas Backstrom, G, Minnesota Wild: Backstrom was great last season, so naturally everyone expects that again. It is very true that Minnesota relies on its defense and goaltending more than people think. Age may play a factor in the decline of Backstrom as health has been an issue a little too frequently. Will the numbers hurtle out of control? No. However, to say the Wild can win its division, that is iffy to be generous. Something tells us Minnesota cracks from the back end first.

7. Evgeni Nabokov, G, New York Islanders: Nabokov was solid for the Islanders last season, but in the playoffs, he was actually worse than Marc Andre Fleury. Yes, that actually happened. There are people that think the Isles could finish second in the Metropolitan, but not with their current goaltending and defense. This is the same goalie that fell asleep during a playoff game as a goal went in. True story!

8. Alex Goligoski, D, Dallas Stars: Last season, Goligoski started to show the promise that made the James Neal trade seem feasible. The problem is now there will be more grandiose expectations. Can he get 50-to-55 points? Yes, we keep seeing those numbers. Let’s temper those expectations a little. Come on, we aren’t ESPN when it comes to predicting these things.

9. Jarome Iginla, RW, Boston Bruins: Iginla is getting paid $6 million this season? Really? Yes, well that includes incentives and bonuses. There are quite a few people expecting a revival of sorts from Iginla. He was horrendous and slow in Pittsburgh. Though he feels good and chummy in Boston, we have the feeling that by March Iginla will wear down. Is 60 points possible? No. How about 50? More likely. And that we would consider a bust.

10. Jake Muzzin, D, Los Angeles Kings: Muzzin broke out nicely which means everyone has delusions of grandeur. The second year wall seems a foregone conclusion. Teams have time to prepare for you and that will work against the defensemen in this case. Muzzin is going to have a heck of a career, but just not starting this season.

Wow! Talk about a crazy little list. Do you have some busts? Step up and bring the noise in the comments below. See you next time.