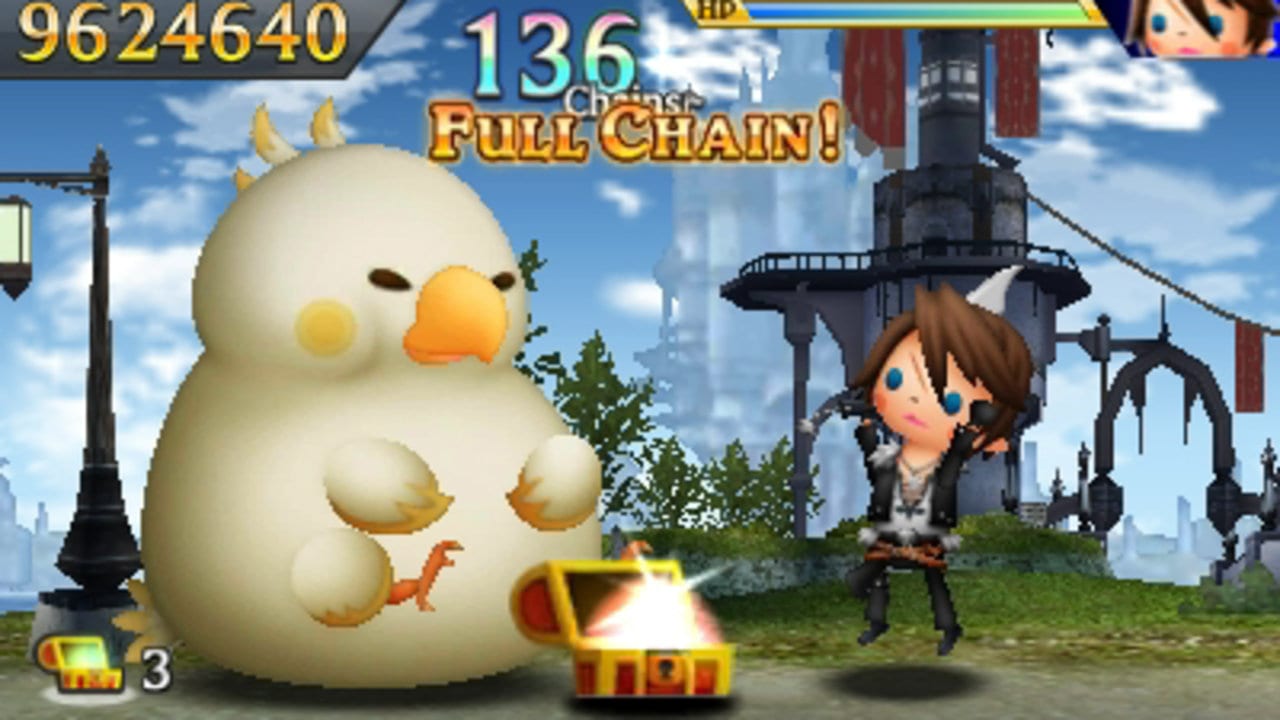 Obesity is a serious problem, even in the chocobo community.

Back in our day, when people were asked to name a rhythm game, their responses were inevitably one of three franchises: Dance Dance Revolution, Guitar Hero, or Rock Band. Theatrhythm Final Fantasy: Curtain Call proves that a handheld rhythm game can not only keep up with the big consoles, but possibly exceed them. This game is bursting with a massive amount of content, including over 200 songs, countless characters and three in-depth modes. With so much packed into one game, Curtain Call is sure to have something for everyone.

As with the vast majority of rhythm games, the player must input the correct command at the correct time. For Curtain Call, this comes in the form of regular, held and slide triggers. What makes the controls here so impressive is their versatility. In fact, Curtain Call allows the player to choose between using the stylus alone, the circle pad and face buttons, or any combination thereof to discover which play style is best suited to the player. Actually, there’s even an advanced one-handed technique that uses “L” and the circle pad.

For us, we found that certain game modes lent themselves better to the stylus alone, while others felt more comfortable on the buttons and circle pad. Major props to the design team for creating such a good control scheme.

Graphically, Curtain Call doesn’t look too different from its predecessor, though that’s far from a bad thing. This title continues the “super deformed” art style, which looks pretty silly and lighthearted. As for graphic quality, everything looks super sharp with tons of bright colours. Some song modes include video footage, and even that looks good. They did a nice job all around from this perspective.

Any rhythm game worth its stock is all about the sound. With such a wealth and depth of tracks from the entire Final Fantasy franchise, it’s not hard to find at least a few good tunes. This, of course, is a gross understatement. There are tons of great songs, reaching all the way back to the original game up to present day. Thus, the question becomes less about the composition quality and more about the audio quality itself.

And on that point, the 3DS’s speakers are pretty pathetic. However, if you plug in a decent set of headphones, you’ll be treated to a much better experience. Even the basic Apple earbuds are better than internal 3DS speakers. Once you’re hooked up to the right equipment, many of the lower frequencies previously missing become audible. While it may not be vinyl quality, it’s pretty good for a cartridge format.

Voice acting is only present in the Versus mode, which we’ll discuss later. Unfortunately, it’s kind of obnoxious, as the character’s squeaky voices chatter throughout the entire experience.

Once you’re finally in Curtain Call, players will quickly realize that it’s not all just tapping and swiping. Like with the previous installment, gamers can choose from a list of real Final Fantasy characters to form their team. Each character possesses their own unique stats and abilities, and in true Final Fantasy form, leveling up and item collection is key.

With each completed song, the player collects various amounts of Rhythmia. After collection enough Rhythmia, the player will receive crystals, which can then unlock new characters. There are absolutely tons of characters, so be prepared to do lots and lots of gaming.

Three main song types exist in Curtain Call: Battle Music, Field Music and Event Music. Battle places your assembled team of four characters in a fight against monsters/bosses for the duration of the song. The catch is that each character has their own track for the triggers to come down.

Field Music features a party leader traversing a great distance. There’s only one track this time but held triggers become much more challenging. Held triggers now have mini triggers within them, and the player must move up or down in order to reach them.

The last category, Event Music, is arguably the most complex. Although it is similar to Field Music in that it only has a single track, the trigger line changes direction without warning and only shows a small snippet of the upcoming triggers. Also, a movie plays in the background (as described earlier), so that’s pretty cool.

In addition to the three song types, there are three game modes to chose from: Music Stages, Quest Medleys and Versus Mode. Music Stages is the simplest. This mode contains your library of available songs for you to play. Additionally, each song has three difficulty settings as well, the hardest of which is consistently very challenging. Music Stages also allows gamers to do either a practice or demo run on any difficulty level. Practice mode loops the same song indefinitely, and demo shows what a perfect run looks like. All in all, Music Stages is the best place to hone your skills.

Quest Medley is our favourite single-player mode. The game sends you and your team through a series of songs, either Battle or Field. Your HP is carried over from each song, however, so be careful. What makes this mode especially difficult is its treatment of boss battles. In order for a quest to be deemed successful, the boss must actually be slain. If you survive the song but do not kill the boss, you will fail your quest. Ouch.

Versus Mode has endless replay value and supports local, online or AI multiplayer. Multiplayer is achieved by having two players perform the same song simultaneously. As you hit your triggers correctly, the EX bar at the top of the screen slowly fills. Once it’s full, the game automatically performs an EX Burst. This induces a random negative effect on your opponent, like having the triggers move twice as fast, or have them spin wildly. This makes for very entertaining gameplay, and we could easily see spending a lot of time on this with our friends.

Theatrhythm Final Fantasy: Curtain Call is a very well-crafted game. With a massive variety of songs, characters and gameplay possibilities, it is sure to provide lots of fun for any gamer, whether they be Final Fantasy fanatics or not.