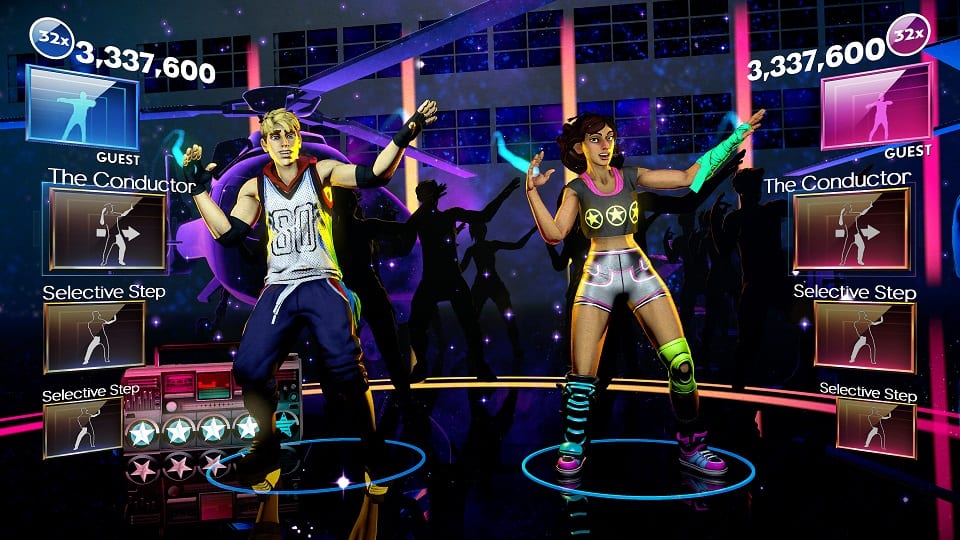 Dance Central Spotlight is the most recent game in the Dance Central series by Harmonix and first for the Xbox One platform. Based on previous games, you would expect a standard set of popular rock songs with easy-to-imitate dance moves that rewards players for timing and precision.

The game starts with a simple introduction where you mirror the avatar’s movements to learn the basic choreography. After the introduction, the Kinect sensor will calibrate to the individual player’s movements. Next, players select from one of the 10 songs that come with the game, along with a routine and character.

Beginner routines are opened first, with options for additional moves and routines unlocked after this level is mastered. Players must push forward with their hand, not just linger over an image on the screen, to indicate a command. One command that works really well is to clench a fist to grab and swipe away a smaller screen.

Since this is a Kinect game, the voice controls are of particular importance. If you miss multiple moves in a row, an off-screen voice (DJ) comes on to remind you by saying “Hey DJ! Practice that!” so you can break down the move. This isolates the move for further practice. “Hey DJ! Slow it down!” slows down the isolated move so you can master it. Other commands include “Hey DJ! Skip!” and “Hey DJ! Got that!”

The DJ offers positive, instructive feedback: “Hey, it takes guts just to try, don’t sweat it.” “Did the work pay off, or are you just that good?” which helps beginners ease into full routines. Sometimes, the DJ interrupts a full routine, which can be more annoying than helpful to beginners who are eager to try a lot of routines in a short amount of time. All commands to and from the DJ were received clearly and quickly.

One note of caution is that the sensor, as a default, can be overly sensitive. For example, game play will stop when another person walks through the room or within range of the Kinect sensor. (This can happen with other Kinect games as well.)

Visuals are clean, with clear details for the characters such as hair and fabric movement on the avatars when going through the dance sequences. All avatars are dressed appropriately for gameplay with young children (not in a revealing or overtly sexualized way). The frame rate holds up well, except for occasional cutaways to special effects.

One special effect that’s a little glitchy is a ’70s flashback. It’s like watching an interactive Lightbright, but the board is slow to shadow your movements and is often incomplete. Other effects are better, such as when your avatar breaks into crystal shards.

Songs are nicely balanced (no overwhelming bass or treble), with mixes that are easily recognizable from the radio and songs sung by the original performers. DJ comments are clear but not overly loud or intrusive when directed to the player.

Of the 10 basic songs provided with Dance Central Spotlight, there is a good mix of slower to faster paced moves and both male and female performers. After selecting a song, character and routine, the player performs the chosen selection and receives points for how well they match the main character’s choreography.

All songs have backup dancers to fill in background and make solo players feel like they have others to dance with. After the player has finished performing their chosen song, they can choose a new routine, new song, or start over with a new character.

Dance Central Spotlight will recommend songs for players, but it will only choose among the 10 basic songs provided with the game. An appealing feature of the game is that additional songs can be purchased for US$1.99 and uploaded directly from the gaming screen. Available songs are updated continuously.

The settings change with the songs, with “Royals” (Lorde) starting in an underwater theme, “#That Power” (will.i.am ft. Justin Beiber) taking to the player to an airport runway, and “Diamonds” (Rihanna) traveling to various areas in a private penthouse or mansion.

Some of the moves are more unique than others (such as the “think on it” move in Jason Derulo’s “Talk Dirty to Me” and the “booty up/booty down” in Cher Lloyd’s “I Wish.”)

If players choose “fitness” instead of “songs,” you can vary the workout times from 10-to-90 minutes, the routines (beginner, standard, deluxe, alternate, cardio, strength), and the physical details of the player (height and weight). Players can master and collect moves that they can choose to play at any time in either fitness or choreographed song mode.

One caution is the two-person game player mode — which is great when players are equally matched — can be frustrating when players are at very different skill levels or are unable to stay within the confined space that the Kinect sensor assigns to them.

Dance Central Spotlight gives players a chance to master basic dance choreography or choose to dance for basic fitness to current pop songs sung by the original performers. Although the game does not greatly expand the diversity of games available on the Xbox One Kinect, it does allow players to add new music to change up routines frequently.