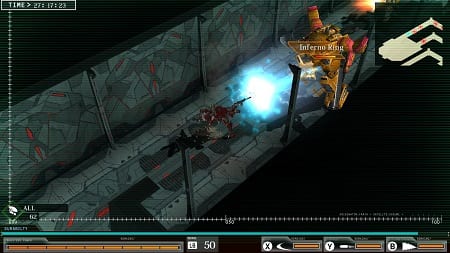 Originally released for the PlayStation Vita back in 2015, Damascus Gear: Operation Tokyo is making the jump to the PS4 with its HD Edition. As fans of the Front Mission and Armored Core series, not to mention Macross, our interest was piqued by Damascus Gear‘s simple premise of using a customizable mech to destroy copious numbers of enemy mechs. Let’s see how well it’s been executed.

From a functional perspective, everything handles well enough. Each of your three weapons (right arm, left arm and back) corresponds to a face button for dealing damage. Defensively, the right bumper is used for sustained boosting while “X” activates a quick boost for evasion. You’ll also be able to lock on to enemies, collect parts for upgrading and consume repair kits to recover health. It’s all pretty solid.

Developer Arc System Works can call this an HD Edition, but there’s no camouflaging the game’s handheld roots. This is particularly true of its repetitive and simplistic environments, which were likely Vita concessions to keep the frame rate smooth. At least the mechs look pretty good with a healthy selection of enemy units that range from smallish cannon fodder to hulking killers. Weapon effects run the gamut from bland to very cool.

Things underwhelm on the audio side, most notably the sound effects that fail to deliver even an inkling that you’re operating a giant mechanical robot. As for the music, it blends into the background for the most part and is nondescript in those instances where it swells.

Set near the end of the 21st century, Damascus Gear finds humanity struggling for survival after their giant robotic creations, known as “GEAR,” became self aware and attacked their creators, rearranging the letters of their name to become the “RAGE.” Now it’s up to you, the newest member of Freya’s Anti-RAGE 4th Division, to help fend off that threat and keep humanity from being snuffed out.

It’s a serviceable setup, and though the characters you meet are long-standing stereotypes, including the grizzled veteran commander (Kotetsu) and antagonistic fellow pilot (Licht), none of them do or say enough to become annoying. Then again, nobody will be playing this for its story, as Operation Tokyo‘s gameplay is grounded in pseudo hack n’ slash and loot collecting.

Defeated foes drop parts, and upon completion you can return to dock to sift through them and see how you can upgrade your mech. There’s a lot of items to collect, many of which have secondary buffs, and you’re free to mix and match as you see fit. It takes a little while to build up your mech, but once you do the amount of customization available is respectable.

Structurally, the game is comprised of 50-plus missions, spread across six ranks. You’ll start with the E-ranked forays, which are essentially glorified tutorials, and move all the way up to S rank. After a slow start things begin to pick up steam around the C rank; enemies become more plentiful and better armed, and boss battles get more interesting. Upon completion of each mission you’ll be assigned a letter grade based on your performance.

Missions typically take between five and 10 minutes to complete, which was obviously done to cater to a portable audience. On a console in which sessions tend to go much longer, Damascus Gear struggles to remain engaging. What passed for decent mission variety on the Vita — clear all enemies, get from Point A to Point B in a set amount of time, take down a fellow GEAR in one-on-one combat, etc. — becomes repetitive the longer you play.

Fighting the RAGE presents an increasing challenge. It’s not necessarily for the best of reasons, however, as bullet sponging and overwhelming you with sheer numbers is the game’s standard operating procedure. As mentioned earlier you’ll be packing three weapons, each of which uses a version of a cooldown timer, so peppering enemies with strikes and then using your boost to dodge their attacks tends to be your best approach in every meaningful encounter.

One more irritant worth mentioning is the poor friendly A.I. It’s a nuisance when they’re simply there to help and incredibly frustrating when you’re tasked with escorting them. The HD Edition does include both sets of DLC from the Vita and an all-new Hero Creation mode that essentially remixes the story, but they’re nothing special.

Despite its new home on the PS4, Damascus Gear: Operation Tokyo HD Edition can’t shake its Vita roots, and it ends up feeling like a game that was meant to be played in small bursts.