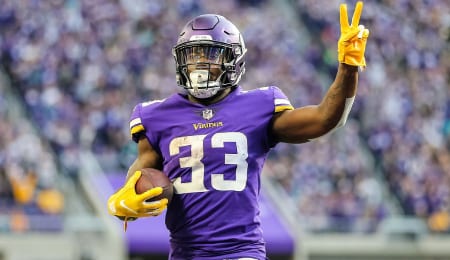 The Minnesota Vikings (5-2) look to stay hot and ride Dalvin Cook to their fourth straight win in a tight race for the crown in the NFC North, while the Washington Redskins (1-6), trying to find their identity amid recent personnel changes, will try to pull off an upset.

In shambles, the Redskins head to Minneapolis on Thursday, winning their only game against the shameless Dolphins. Newly installed Head Coach Bill Callahan wasn’t shy about his feelings towards featuring their ground attack. Despite almost losing back-to-back, Callahan would sooner die than to call a pass play. With the team averaging a run-split of 55:45, quarterback Case Keenum will neither have the volume nor the talent to support any sort of Fantasy success this week.

Through Callahan’s inaugural contests, running back Adrian Peterson has averaged 21.5 attempts per game, generating 100 yards per game. Buoyed by volume, Peterson faces a sneakily elite run defense allowing 90 yards per game, 3.8 yards per carry and has given up just one touchdown on the season. Expect Peterson to produce low RB2 numbers similar to his last game against San Francisco.

Callahan’s head coach appointment killed what was left of McLaurin’s Fantasy value. Through two weeks, he’s caught five balls for 111 yards and two touchdowns. Negative regression will hit the rookie like a truck. Best seen as a low-end WR3 with bona fide WR1 talent, McLaurin is a gamble as a flex this week against a leaky pass defense prone to giving up splash plays to deep threat receivers. As for the rest of the Redskins’ pass catchers, you’re on your own.

Minnesota remains just one game behind the division leader Green Bay. Quarterback Kirk Cousins flipped a switch following Week Four’s loss to Chicago. Since then, he’s averaged 75 per cent completion and 325 yards per game while throwing for 10 touchdowns and one interception. A tale of two stories, since that loss, by week, Cousins has finished as QB9, QB6 and QB3. As teams have chosen to beat the Redskins on the ground, he isn’t exactly in a smash spot. Regardless, confidently fire Cousins up as your low-end QB1.

Cook is an angry locomotive, running for 133-725-8 and adding 24 receptions for 220 yards on the season. The Swiss-army running back, who rolled over the Giants a couple of weeks ago (see video below), has not averaged lower than 13.4 Fantasy points and should be locked-in as a top three back in a premium matchup. Don’t overthink it.

Since Week Three, squeaky wheel champion Diggs has averaged 7.5 targets, 117 yards and one touchdown per game. Doubling Thielen in air yards, Diggs is the main beneficiary of deeper play-action passes. CB Josh Norman is Diggs’ most likely adversary. Self-proclaimed Batman, Norman has been anything but vigilant on the field. Allowing 13 yards per reception on 25 receptions with six touchdowns and one interception for a passer rating of 140.5, he’s been a gift that keeps on giving to opposing quarterbacks.

Diggs ranges from low-end WR2 to mid-tier WR1, dependent on Cousins’ performance. Questionable scratch Thielen has developed an unsurprising negative performance correlation to Diggs. If able to suit up, Thielen is likely to battle with CB Quinton Dunbar. Allowing 10 yards per reception on 24 catches, Dunbar is leaky to shorter passes but has punished greedy quarterbacks for three interceptions, holding them to 62.6 passer rating. With an AdoT of 12.2 yards, Thielen is a great fit against Dunbar as an underneath PPR vacuum receiver. Taking a hit in value from a run-heavy team, Thielen is a mid-tier WR2 in a plus matchup.

Slot receiver Johnson will need to step up in the event Thielen is unable to suit up. Third in air yards on the team, Johnson has managed a statline of 13-134-1 as the team’s rarely used WR3. Consider him an okay yet unexciting flex against Dunbar. However, expect the team to run through Cooks before throwing to Johnson. Vikings tight ends Rudolph and Smith have combined for 26-183-1 on 31 targets for the season. On the fringe of streaming options, Rudolph should record his first touchdown Thursday but neither player is a viable season-long option.

Here’s another track from Pink Floyd‘s rock opera, The Wall. “Comfortably Numb” was the third single from this classic album.

Now it’s your turn. How do you see this game playing out from a Fantasy perspective?