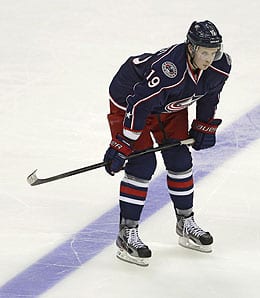 We all love challenges in life and here at The Wire Troll that goal is to keep upping the bar. It is not enough to come up with the best gems each week on the waiver wire. Now, every so often, we will mix in daily waiver gems that could be ready to shine on just one particular day.

Typically, most daily Fantasy players feast on Tuesdays, Thursdays and Saturdays. Those are the big days… err, nights. Let’s get down to business with this week’s picks.

1. Ryan Johansen, C, Columbus Blue Jackets @ EDM: Remember these are typically cheaper values crossed with lower ownership rates. With the injury to Marian Gaborik, all Columbus players are going to have to step up. Johansen has played pretty well under some tough circumstances, using his size and reach to his advantage (see video below). Some have expected more out of a guy like Johansen, but it has been the team defense and goaltending that has let down Columbus. Playing against Edmonton, a team that gives up nearly four goals a game, may be just what the doctor ordered. Johansen’s 5-to-10 per cent ownership rate means his daily price should be relatively cheap. Cheap, when it translates into undervalued, is good in daily Fantasy hockey.

2. Derek Roy, C, St. Louis Blues @ BUF: This is a very risky play but Roy has upside because he plays in an offense that heavily reduces the toughness of his minutes. People must realize that in daily Fantasy hockey, average time on ice (ATOI) is not an issue. It is all about points, shots, blocks, special teams points, etc. Thinking daily means climbing outside the box. There is just no way with all those easy minutes that Roy will stay mediocre and his three-point performance Thursday is an indication of occasional outbursts. Facing Buffalo, the team he spent his first eight seasons toiling for, should inspire the fire, so to speak.

3. Brandon Pirri, C, Chicago Blackhawks @ COL: Now, this is another absolute gamble with a ridiculously low ownership rate/daily start rate. Pirri can get you some points and that is the name of the game. As he gains more confidence and a little more playing time, his talent will shine through. Furthermore, a game against Colorado could be very beneficial as Pirri is likely to face the Avalanche’s weaker defensemen. Colorado has started to regress as expected, so starting Pirri might be a flyer worth taking.

And now, here’s a bonus centre we’re looking at for this week (note that Dallas doesn’t play Tuesday, but here’s a guy we like this week.

Cody Eakin, C, Dallas Stars: Fantasy hockey is all about taking risks where most do not. Though Eakin is only averaging a point every other game, his Fantasy relevance is slowly rising. The buzz for Eakin has grown from an afterthought to a “maybe” and that means maybe you should consider him on your roster — especially in deeper leagues– for your utility or fourth centre position.

As always you can follow me on Twitter @ChrisWasselTHW and thank you for reading. Good luck this week in your Fantasy leagues.

Now it’s your turn. Let us know in the comments below who your favourite Fantasy hockey waiver wire pickup of the week is.