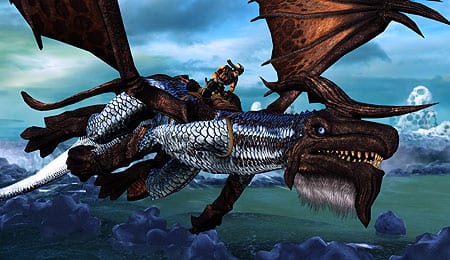 Yep. Pretty sure this makes me Toruk Makto.

When we saw that Crimson Dragon was going to be an Xbox One launch title, we confess we had some mixed feelings about it. On the one hand, we were fans of the old Panzer Dragoon franchise that the game draws its inspiration from; on the other hand, we were underwhelmed by Crimson Dragon Side Story on our Windows Phone. So where does Crimson Dragon check in? Somewhere in the middle.

Most of the game is on rails, and when that’s the case things handle reasonably well. You navigate within your guided route via the left stick and can do barrel rolls by tapping the left and right bumpers, respectively. Aiming is down with the right stick, whether for straight shots or to paint targets, with the right trigger firing. You can also toggle between available weapons with the left trigger. On missions with a wingman, you can have him cover front (d-pad up) or back (d-pad down) as well as team up for a powerful combination attack (X). It’s not great, but it works.

When Crimson Dragon moves off the rails and allows you to fly freely, however, it doesn’t hold up as well. The positioning of enemies and weak points just isn’t conducive to this approach since it doesn’t allow you to simply hover in place and blast foes — an approach that’s often needed when trying to whittle away the health of massive bosses. Instead we found ourselves constantly cruising around the levels and trying to sneak in a few good shots before repositioning our dragon for the umpteenth time.

Under certain circumstances, such an issue would check in as an annoyance. Here, however, it’s more than that because you’re on the clock to defeat these bosses. It’s one thing to be defeated by your enemy. It’s another to be defeated by limiting controls.

Despite clocking in at a memory-hungry 6.9 GB, Crimson Dragon could certainly pass for an Xbox Live Arcade game from the 360 (a service that caps at 2 GB)… doubtless because it began its life cycle as a 360 title. Environments are recycled liberally, and none of them offer up anything memorable or exhilarating from a scenic perspective. Despite an impressive sense of scale, dragons, enemies and projectiles aren’t awe inspiring to behold, either — though at least their confrontations are lively and colourful.

Music and in-game sound effects also fail to deliver. Even after hours of playing we’re having a hard time recalling what the game sounds like, which we guess is at least a semi-positive since it didn’t stand out for being bad (and yeah, that was a textbook example of a backhanded compliment). The voice acting and narration don’t elicit anything.

There’s a framework of a story in place with Crimson Dragon… something about a colonized world, the outbreak of a disease (Crimsonscale) and the ability for human riders to bond with dragons. It’s told through a series of unimpressive cut scenes and humdrum mission briefings, and there’s very little to care about on that front.

Given the game’s structure, however, that’s hardly a surprise. With a leveling dynamic in place for both you (the rider) and your dragon, it’s necessary to frequently revisit previously completed missions to earn additional experience or hunt for a needed artifact. Therefore, it’s your ability to embrace the core gameplay that’ll ultimately determine how much enjoyment you get out of the game, because there’s a lot of very similar content you’ll be asked to play again and again.

Missions within Crimson Dragon are segmented into multiple sections, each of which is scored independently based on your performance. For example, a four-section level might ask you to kill all the enemies in a flight path, then collect beacons, then avoid damage in a fight and finally grade you based on how quickly you can take down a creature (or creatures). These are then all combined together to give you an overall grade for that level.

Upon completing a level you’ll reap the rewards in the form of experience points as well as credits and various boosts. Some can be fed to your dragon for added EXP or to learn new abilities, others take the form of single-use buffs called ampoules (allowing you to augment life, attack, dexterity, etc., for the upcoming mission), and then there are rare seeds needed to change your dragon’s base element (i.e., from fire to wind) or evolve them into a more powerful version.

There are two difficulty settings: Casual and Classic. The former is pretty forgiving, but the latter offers up a substantial challenge that’s worthy of its predecessor. Enemies of all sizes unleash attacks with relentless fervour, and if you can’t keep moving and firing simultaneously you’ve got basically no chance to progress beyond the first handful of levels. The game does offer help in the form of A.I. wingmen and regenerators that allow you to essentially continue mid-level, but those aren’t panaceas.

Crimson Dragon definitely grew on us. The more we played, the stronger our dragons became, and the more we wanted to dive back in and level them up some more. That only held true to a point, though, as eventually visiting the same levels and fighting the same enemies wore thin.

If we may paraphrase the old “manure” joke, the bad news is there’s not a lot of variety with Crimson Dragon in terms of content. The good news is there’s tons of it. If you enjoy a tough on-rails shooter with some addictive RPG elements there’s a good chance you’ll find this to be a strong buy. If not, there’s really nothing else on offer to win you over.