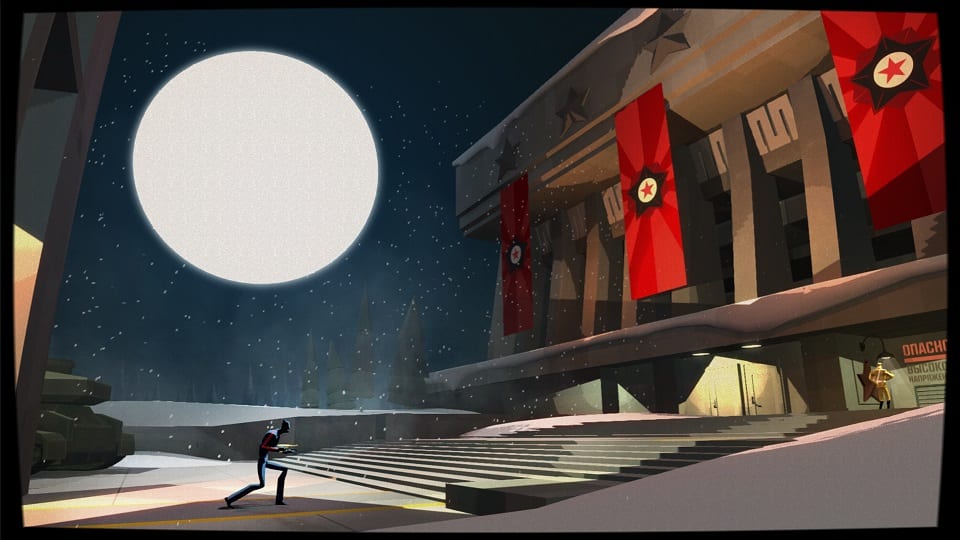 Sony’s fourth PSN Play promotion winds to a close with the release of Dynamighty’s stealth/shooter hybrid, CounterSpy. Set as a satirical take on Cold War tensions, the game has an eye popping style. Now to see about the substance.

Smooth and responsive when moving in a 2D plane, CounterSpy encounters a few stumbles when it’s time to take cover. That’s because the command to duck behind objects is also used to execute a diving roll. As such, there are times when you’ll be trying to get out of sight quickly only to somersault right past your intended cover and into view of a roving guard. In a game largely built around stealth, that can lead to some exasperating moments.

Shooting, meanwhile, isn’t as accurate as you’d like. This is especially true when firing from cover as the game moves from a 2D perspective to a 3D, over-the-shoulder view. It’s a little too tough to accurately line up shots without popping out from behind cover, exposing you to eagle-eyed guards that identify you faster than they should given the POV’s limitations. When in 2D it’s reminiscent of Shadow Complex, complete with red aiming laser.

Artistically, CounterSpy just nails the Cold War era vibe through its angular characters, heavy use of blues and reds (depending on which faction’s facility you’re infiltrating) and propaganda-inspired level design. Crisp animations keep the action lively and enjoyable, and we cannot oversell just how much the game’s immaculately crafted aesthetic does for the overall experience.

Smooth jazz plays throughout the game, reinforcing that 1950s-’60s time period. It’s a pitch perfect soundtrack. Effects and enemy chatter aren’t as endearing, but it’s still the presentation that allows CounterSpy to stand out from the crowd.

Based on the Cold War between the United States and Soviet Union, CounterSpy offers a more fun, fictitious take on those events. Here you’ll serve as an agent for C.O.U.N.T.E.R, whose purpose is to prevent two superpowers (the Imperialists and Socialists) from carrying out the diabolical plan to launch a nuclear missile at the moon — yes, both entities have the identical plot, and they’re even kind enough to operate off an identical set of plans to make it happen.

It’s up to you to prevent this cataclysmic event, and to do it you’ll need to break into secret military facilities for both sides and liberate secret documents. Each day allows you to select between two missions with different payoffs. For example, the Socialist mission might offer a healthy amount of cash in the form of dossiers and four launch plans while the Imperialist undertaking will net you some weapon blueprints and two launch plans.

Completing the game requires you to acquire 25 sets of plans, and each day brings a stiffer challenge, so you’ll want to balance out beefing up your resources with reaching the final mission. Collecting weapon and formula blueprints — formulas are single-level boosts than can be purchased and equipped before embarking on a mission — helps make you a deadlier spy, and you’ll also need money to purchase more ammo and additional guns once you’ve acquired the blueprints and formulas. It’s a pretty interesting system that gives you some wiggle room over how you approach the missions.

Levels themselves are randomly generated from a collection of rooms, so theoretically you can play through the game multiple times and never see the same layout twice. It sounds cool, but in reality they start to blend together early on. They’re fun to explore, however, and the challenge in making your way through them without getting killed really ramps up after the first few days.

Adding more weight to your actions is a DEFCON level (from 1 to 5) that persists from one mission to the next. Each faction has its own DEFCON, which encourages you to bounce between the two rather than focus your efforts. Having enemies radio in or getting killed will raise the level, while forcing officers to surrender will lower it (as will one of the in-game formulas). It’s a really smart system.

While there’s a lot of interesting things going on around CounterSpy, the actual gameplay doesn’t quite measure up to some of the other areas. The biggest problem is that it’s often too difficult to avoid detection, due to no small part to the mixed 2D/3D setup. Given that you’re always looking at the game from a forced perspective, it’s basically impossible to accurately determine what a guard can and can’t see. We’ve been spotted in a cover (and then shot) by guards we had no means to see or engage, which is a problem for a game built on stealth.

Another issue with that is that there are times when you’ll enter rooms and be spotted before you can even enter cover. It feels unfair, and that’s something that popped up several times (and for several reasons) during our time with CounterSpy. Too many failures felt like the result of factors outside our control — like guards several floors away and nearly inaccessible radioing in and raising the DEFCON level while you scramble to even reach them.

It took just over three hours to complete the game on the default difficulty. Doing so unlocks a harder setting while carrying forward all blueprints and dossiers but resetting owned equipment and stripping you of your remaining cash.

Although saddled with some frustrating elements, CounterSpy has a lot going for it, including great production values and a clever melding of gameplay styles that works more often than it falters.