Wire Troll: At the Break – Calm Before the Storm? 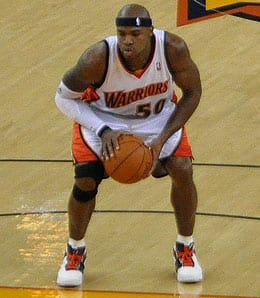 Corey Maggette should be back this week.

Welcome to The Wire Troll for Week 17. The NBA All-Star Break allows Fantasy owners a brief respite to take a hard look at their team’s performance, and possibly retool for their league’s stretch run. NBA teams are doing much the same thing, and their decisions to “play the kids” or dump salary in blockbuster trades often can change the tides of Fantasy fortunes for the savvy and vigilant owners out there. That would be you, by the way.

The Break is also a time for players to heal their injuries, and Kobe Bryant’s Fantasy owners are hoping that they’ll see their man back on the floor this week, as do owners of Brandon Roy, who has missed 12 straight games with a hamstring injury. Monta Ellis and Corey Maggette of Golden State should be back this week, thus torpedoing the burgeoning Fantasy value of recent Wire Troll alum Anthony Morrow. Uber-guard Chris Paul won’t be back this week or next, but it sounds as though he’s committed to coming back before the season ends…now we just have to hope that New Orleans stays in the playoff hunt.

With the trade deadline looming on February 18, there figures to be a flurry of activity that could well determine the Fantasy fortunes of many teams down the stretch. Several rumours are flying around as we go to cyber-press, including a blockbuster that would send Caron Butler and Brendan Haywood to Dallas and Drew Gooden and Josh Howard to the Wizards. Several big-name stars have been mentioned in trade talk, and you’ll want to move quickly when and if a deal is made. Stay up to date on all the late-breaking waiver-wire worthy news by following the Wire Troll on Twitter.

Nazr Mohammed, Charlotte Bobcats: Mohammed has been playing some solid ball lately, and even the return of Tyson Chandler didn’t dissuade Nazr from posting a monstrous 21-point, 20-rebound line last Wednesday. As long as Mohammed is on the floor for at least 30 minutes, he’s a bona fide Fantasy starter – but Chandler’s presence will almost certainly erode Mohammed’s playing time. If you decide to add Mohammed, stay vigilant – and be prepared to cut bait when the moment’s right.

Jermaine O’Neal, Miami Heat: It has always been about the health report with O’Neal, but right now he appears to be in fine fettle and finer form. Through five games in February, J.O. has averaged 15.4 points, 8.4 boards and two blocked shots per outing. Be on the lookout for the injury bug to bite again, and beware of his mediocre free throw shooting ability, but if you’re in need of big man stats, O’Neal can be of Fantasy value in just about every format.

Lamar Odom, Los Angeles Lakers: Odom isn’t widely available, but if coach Phil Jackson follows through with his speculation about starting Odom over Andrew Bynum the veteran should see a nice spike in Fantasy value. If you’re in a shallow league, cast a glance at the wire and grab Lamar if he’s there; he has shown that he can post gaudy numbers when he’s playing starter’s minutes. This also might not be a bad time to offer a trade for Odom if you are so inclined.

Luc Richard Mbah a Moute, Milwaukee Bucks: The Prince has been on a nice little run lately, averaging 12.8 points, 10 rebounds, 1.3 steals and 1.0 block over the four games leading up to the Break. His offensive skills are limited, but as long as Mbah a Moute is seeing heavy minutes he’s worthy of Fantasy consideration for modest help in the defensive categories. Be ready to cut bait, though, as Milwaukee’s rotation figures to remain in flux as the Bucks try to put a winning combination together.

Delonte West, Cleveland Cavaliers: A few Trolls ago, we warned you off the brittle West as a plug-in for the injured Mo Williams, instead endorsing Daniel “Boobie” Gibson as the guy. Well, now that West is back on the court – after missing nine straight games due to a fractured left ring finger – it may be time to give him a look. In his first game back, the gun-toting West scored eight points (including two treys) and dished six dimes in 23 minutes of action. Gibson will probably continue to start for now, and Williams may be back by late this month or early March, but West could be valuable in the interim for trey-starved owners in deeper leagues.

Mo Williams, Cleveland Cavaliers: All reports indicate that Williams’ rehab is going well, and the Cavs’ starting point guard may be back by the end of February. If your team looks to be in line for a playoff berth, or needs a push to get off the bubble and into the dance, then Williams is worth a grab if he’s available. Mo is averaging 16.9 points, 2.3 treys, 1.2 steals and 5.1 assists this season, and that kind of production could be a real difference-maker in the Fantasy season’s final days.

Marcus Thornton, New Orleans Hornets: Thornton returned to action Wednesday after missing three straight games due to a bruised lower back. If any impatient owners dumped him during that stretch, now might be a good time to scoop him off the wire. Thornton has been rock-solid as the Hornets’ starter at the two, and should see even more looks with CP3 on the sidelines. We’d expect him back in the starting lineup as early as the first game after the Break, so if Thornton’s on your wire, pull the trigger and enjoy the ride.

By Buck Davidson
Tags: Corey Maggette
Posted in BASKETBALL, Buck Davidson, The Wire Troll | Comments Off on Wire Troll: At the Break – Calm Before the Storm?