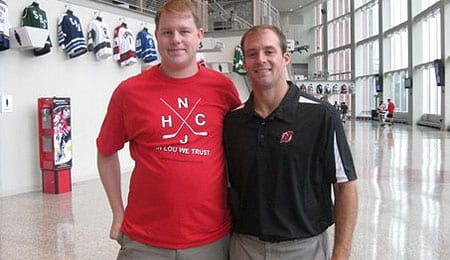 Andy Greene (right) has surprised us with his offensive contributions.

This week on The Wire Troll, we take a look at three players that may or may not be one hit wonders. No one is sure what to make of their hot streaks, but here they are and here we are. Will they be able to continue their success? It will be interesting to see but one thing is clear: They earned a spot this week on our nice little list.

Now let’s get right into these because we may add one or two honourable mentions along the way. Yes, some of these names shocked us too. At any rate, it is easy to see how this all works in the grand scheme of the Fantasy universe. Are you ready? It’s blizzard time or, shall we say, time for some troll excursion.

Andy Greene, D, New Jersey Devils: Can anyone believe this? Greene has always been a pretty good defenceman. He does his job more or less, chips in a few points and does solid work against the other team’s top six when he is on the ice. Greene has eight points (two goals, six assists) in his last five games, but generally shots on goal are not his strong suit — being “ahead of the play” is. The fact that the points are coming is a bit of a surprise but he has definitely worked hard during the lockout. The power play points are a very nice bonus for Fantasy owners. With the schedule getting tougher, and Greene getting more and more ice time, it may be time for him to see top line power play time which will be beneficial to future production.

Rene Bourque, LW, Montreal Canadiens: Bourque is now skating with Tomas Plekanec and Brian Gionta in what seems to be a relatively productive line. Will it continue? At least against Toronto it didn’t, but the schedule seems to be pretty conducive to a good Fantasy week. Bourque averages three shots a game which is good for the bottom line. However, do not expect him to hit anyone or block shots… he is not a stat filler in that sense of the word. Here is a guy owned in 25-to-30 per cent of Fantasy leagues that is an up and downer. Stay tuned — it will be a bumpy ride but still one worth taking in deep leagues. Here we go!

Bryan Little, C, Winnipeg Jets: It is that time of year when Little seems to get going. This season is different only because of the lockout, but this pivot just has a way of being a pretty good point producer that tends to always fall through the cracks when it comes to Fantasy drafts and waiver wires. If Evander Kane keeps playing along his side and Blake Wheeler does a little work on his line too then Little will inevitably get on a bit of a run. His runs usually are marked with consistency. Do not complain — ride the wave.

Colin Wilson, LW/C, Nashville Predators: It is probably time to take a dark shot at a player that is only owned in less than 5 per cent of all Fantasy leagues yet is averaging over a half point a game. Now, six of Wilson’s seven points came in a three-game stretch but if he minutes with the “top six,” he will have better chances to produce. In the next week, he is at the very least worth a look.

Ladislav Smid, D, Edmonton Oilers: Smid is still averaging right around three blocks per game and in deep leagues in which blocks are needed, he is in demand for that and a little ATOI (Average Time On Ice). At the very least he is widely available and if you can use a category plug, then here’s your dude.

Brendan Gallagher, RW, Montreal Canadiens: Gallagher had a season-high six shots on goal on Saturday against Toronto in a nasty 6-0 loss and he looked pretty good once again despite limited ice time. His shooting percentage is rather high at a bit over 20 per cent, but at this point, the winger is worth a look in the deepest of leagues.

That is it for now, see you next week on The Wire Troll. As always you can follow me on Twitter at @ChrisWasselTHW.