The Wire Troll: Cody Franson is on Fire 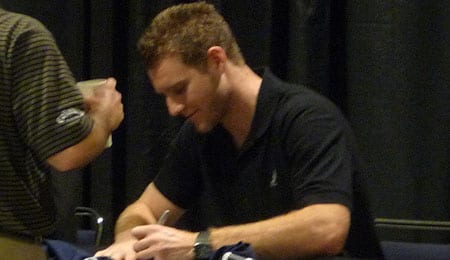 The way Cody Franson is playing, the autograph hounds will be buzzing.

It is hard to believe that almost one month of the Fantasy hockey season has elapsed, yet that is where we are. Normally we examine a bunch of players but in this shorter edition, the goal is to find alternatives to try to cope with injuries. There are some maladies where the replacement is just never going to equal the player that was lost and some that actually help. The Jonas Hiller injury, for instance, led to Viktor Fasth and his eight-game winning streak (or at least it partially led to that).

The bottom line in Fantasy hockey — especially in daily leagues — is this: Timing is everything. When bigger names go on the injured reserve list, panic reigns supreme. If you do not think so, then look at the reaction when Erik Karlsson owners realized he would be out for the season after sustaining a 70 per cent tear of his Achilles tendon. An exact replacement is not going to happen. After all, defencemen that average just about a point a game do not exactly grow on trees. It is time to quickly get down to business with this week’s edition of The Wire Troll.

Cody Franson, D, Toronto Maple Leafs: It is hard to believe, but Franson is suddenly on fire. Eight points in 11 games has gotten him noticed and for Karlsson owners, Franson is at least worth somewhat of a look. His ownership values are around 15-to-20 per cent and some have not quite received the memo yet. Therefore, you may want to strike before it’s too late. To entice you further, Franson’s ATOI is steadily rising as well which is another reason to at least give him a shot. What is the worst that could possibly happen? Right? Right!

Brad Boyes, RW/LW, New York Islanders: Boyes is enjoying playing around 20 minutes a game on the top line with John Tavares and Matt Moulson. Granted, Boyes’ +/- may not be that great, but his ownership percentage is going to be shooting up as his buzz ratings are through the roof. Early indications are that his ownership could rise anywhere from 20-to-40 percentage points (or maybe even more) in the next week. The winger is a hot commodity and in leagues in which the wing positions are a little thin, here is a perfect pickup to help cushion the blow of those injuries.

Zach Bogosian, D, Winnipeg Jets: The malaise or black cloud that hung over Bogosian has cleared up enough for him to play — and play some big minutes at that. That is good news for his owners, but even better news is that Tobias Enstrom is out indefinitely with a shoulder injury. That is great for those trying to pair defencemen (like Dustin Byfuglien for example). Bogosian’s ownership rate is low enough that there is little risk to take a trial on the guy and see what he can actually do. His booming shot and presence can only help at this juncture.

Ben Scrivens, G, Toronto Maple Leafs: This is the classic short-term pick while James Reimer is still recuperating from his latest “boo-boo.” Scrivens is doing the job (including a nice 34-save shutout against Ottawa on Saturday) and that is the bottom line. It will be interesting to see what happens when Reimer does come back because Scrivens might have earned himself almost platoon-like status. Keep an eye on this situation because Scrivens is the more durable goaltender. He will jump double digits in ownership again this week.

Nikolai Khabibulin, G, Edmonton Oilers: With some injuries to goalies like Miikka Kiprusoff and such, at the very least Khabibulin is at least worth a look in the deepest of leagues because just so few people own him. He was great in relief on Saturday and could see more than just the spot start in the future. People have to think way outside the box with all of these injuries and this is the old Vegas “let it ride” special.

Joel Ward, RW, Washington Capitals: Here is another get-him-while-you-can dude because when Alex Ovechkin’s line gets going, Ward will be dropped like a bad habit. But until then, people should just go with the idea of a nearly point a game guy (11 in 14 games). Hell, Troy Brouwer has seven goals so that line is pretty effective in limited time. Hey, you could do worse here.

Well, that is it for this week. Next week we are going to do an updates edition of The Wire Troll. As always, you can find me on Twitter at @ChrisWasselTHW. Good luck and hopefully the wire can save your teams.