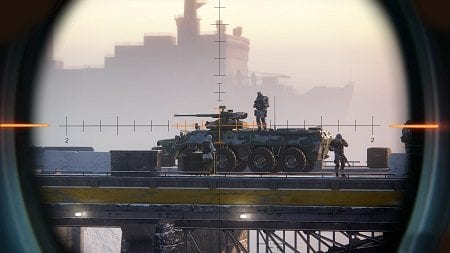 Stealth and long-range combat are still your primary advantages, though, and much of your time will be spent scouting and marking targets, and then finding the best way to pick them off without alerting other enemies. Pulling off clean kills at long distance is immensely satisfying, particularly when the “bullet cam” kicks in, even if it feels like a total ripoff of Sniper Elite. The further out you are the more challenging hitting your targets becomes, and we definitely would’ve appreciated a better tutorial to explain adjusting for bullet drop and wind.

In Sniper Ghost Warrior Contracts, you assume the role of the Seeker, a deadly sniper equipped with a high-tech mask that protects your identity and offers advantages in combat. The game is made up of a series of contract killings, set in one of five locations across Siberia, where you’ll be given a set of objectives and given the option to exfil each time you complete any of them successfully. It’s very straightforward and plays to the game’s strength of overcoming the odds with stealth and ranged precision.

That mask is your top tool outside of the sniper rifle, as you’ll use it constantly to scout out areas and mark targets — without marking them with your mask, no range is provided for you to adjust your rifle’s scope. It can also allow you to track footprints, illuminate and automatically mark nearby enemies (with an upgrade) and more. It has a heavy Deus Ex feel to it.

For as much as we enjoyed Contracts most of the time, there are some drawbacks. Beyond some of the technical hiccups and bugs, enemy A.I. is really uneven. In terms of awareness, roving patrols can be pretty dense, even on the higher difficulty settings.