The Wire Troll: Matt Flynn is Back! 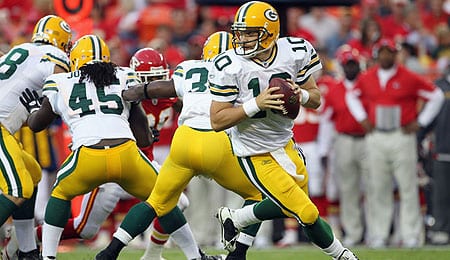 Each and every week of the NFL season some random players emerge from depth charts and make an impact. When this happens, fodder is produced for Fantasy owners to debate over. As such, we present to you The Wire Troll for Week 13.

With byes done for the year, waivers tend to slow down a bit. However, this does not mean you should slow anything down. There is value to be found on the wire every week. Even if you don’t start those you claim, insurance is always wise because injuries are a heavy winch with a long reach.

Christian Ponder, Minnesota Vikings: Okay, so here is the deal: it’s late in the season and the playoffs beckon like old man winter. We also realize even talking about Ponder is downright crazy and it could be damaging to our site’s reputation. Remember the reaction when the Vikings drafted him 12th overall in 2011? (Refresh your memory with the video below.) Ponder is essentially a failed first round draft pick at this point, we realize that wholeheartedly. However, did you know that prior to Sunday’s game only Drew Brees, Russell Wilson, Tom Brady, Ryan Fitzpatrick and Mike Glennon had a higher completion percentage in the previous three games than Ponder’s (69.8). Sure, Ponder threw four picks in those three games but he also threw four TDs as well. He was 21-for-30 for 233 yards with one touchdown and zero INTs on Sunday in the much ballyhooed tie against the Packers.

Matt Flynn, Green Bay Packers: Flynn knows the offense and he has weapons like Eddie Lacy, Jordy Nelson and James Jones. So now that he has kissed his sister we boldly recommend nabbing Flynn. We know plenty of you Aaron Rodgers owners have been playing the Case Keenum/Scott Tolzien carousel. To that we say fly with Flynn. Why? Because he has succeeded in this offense and he looked comfortable on Sunday (albeit, it was only against the Vikings). With the Lions next up, we like Flynn to fling, especially in the second half.

Benny Cunningham, St. Louis Rams: Now that the overhyped (by us) Daryl Richardson has basically been relegated to scout team duty, incumbent Zac Stacy needs an understudy. Enter Cunningham, a man that featured expert Chris Tubbs told us to add way back on our October 2 Podcast. Former Middle Tennessee State Blue Raider Cunningham is built like a running back at 5’10”, 217 pounds. After his 13-carry, 109-yard performance on Sunday vs. the Bears, he is averaging nearly six yards per tote. With Stacy facing a concussion protocol test, Cunningham will a heavily added and viewed player. Don’t wait, Cunningham can provide insurance. A trip to San Francisco is next for the Rams and while that is indeed a tough match-up, don’t be scared to roll with him even if he is not the starter.

Rashard Mendenhall, Arizona Cardinals: In late-October, we spouted about Andre Ellington and just two weeks ago Mendenhall got a mention in the Wire Troll. Well, they both rushed for 50 yards in Sunday’s blowout win vs. the Colts, but Mendenhall got the touchdown. The time-share in Arizona is confusing but one thing is for sure. Ellington is finesse to Mendenhall’s power and that means goal-line carries for Mendenhall. Ellington is a more PPR friendly addition, but Mendenhall is certainly a better starter across all formats.

Justin Hunter, Tennessee Titans: The 34th overall pick in this year’s draft showed up in a big way Sunday versus the Raiders, with six catches, one touchdown, and his first career 100-yard performance. At 6’4″ with speed to burn, Hunter has plenty of upside, especially in Week 13 against an Indianapolis defense that gave Carson Palmer flashbacks to his USC days last weekend.

Nate Burleson, Detroit Lions: After missing the last seven games to the most serious pizza-related injury we can recall (although you can’t help but wonder if too much pizza may have hastened the end of Albert Haynesworth’s career), Burleson filled Detroit’s No. 2 wide receiver void nicely Sunday with seven catches for 77 yards and a score against Tampa Bay. With defenses constantly rotating their coverage to guard against Calvin Johnson, we think Burleson has a decent chance to put up good numbers over the next few weeks.

Ladarius Green, San Diego Chargers: While Antonio Gates remains the most consistent tight end in San Diego’s offense, Green has been getting more and more looks as the season has progressed, including 160 yards and a touchdown over the last two weeks. With the way Philip Rivers is slinging the rock, any Charger has a chance to go off any given week. As Gates’ skills continue to decline, we feel third-year pro Green is a good add in standard leagues, and a great stash in dynasty formats.

New York Giants: This squad has quietly had four sacks in three of its last four games, and forced multiple turnovers in four of its last five, with two touchdowns as well. This week, the G-Men are lucky enough to play the lifeless Redskins, so if the Giants’ D is available make sure to pick it up. If this defense is already owned, we also recommend (in order of preference): Dallas, Baltimore, and Detroit (provided Aaron Rodgers misses the game as expected) — the trifecta of home teams on Thanksgiving. Offenses tend to struggle Thursdays more often than not, and Turkey Day should be no different.

Now it’s your turn. Let us know in the comments below who you favourite waiver wire pick of the week is.