The Wire Troll: The Return of the Closer Carousel 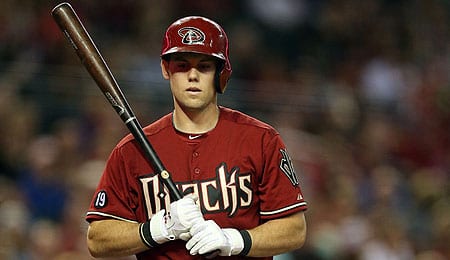 Chris Owings has been hitting up a storm for the D-Backs. (mlbnation.co.kr)

Welcome back for another year of The Wire Troll. It didn’t take long for the chase for saves to become an early focus for our Fantasy squads. Some things just never change. As always, these early season moves have huge ramifications, so let’s cut to the chase and find some places to drop a little of that FAAB cash this week.

Chris Owings, SS, Arizona Diamondbacks (CBS: 40 per cent owned, ESPN: 9 per cent): The Diamondbacks made the right decision this spring in going with Owings over incumbent Didi Gregorius. Owings is coming off a great 2013 at Triple-A Reno where he hit 12 homers with 81 RBI, stole 20 bases and scored 104 runs. In the first week of the season he’s already chipped in with three thefts and is a must-own in all formats. It was clear even way back in 2012 at the AFL that Owings was a prospect to be reckoned with, as he could make adjustments quickly. Check out the video below as he’s completely ahead on the first two pitches, before making the adjustment and staying back. You’ll the see that the results were worth the effort.

Drew Hutchison, SP, Toronto Blue Jays (CBS: 54 per cent owned, ESPN: 3 per cent): We had the opportunity to catch Hutchison in the AFL and liked what we saw. He built on that strong performance with a great Grapefruit League showing and surprised many by claiming a spot in the Jays’ rotation out of Spring Training. In his debut Tuesday against the Rays he pitched 5 1/3 shutout innings with four punchouts. Hutchison’s Tommy John surgery is now well in the rear-view mirror so cough up a few of those FAAB dollars and enjoy the ride.

Mark Buehrle, SP, Toronto Blue Jays: Slotted just 112th in our Starting Pitcher Rankings, Buehrle sure looked better than that in his season debut as the lefty pulled within a baker’s dozen of 200 career wins by coming within an out of a four-hit shutout, fanning 11 and walking just one. He has a two-start week coming up, so grab him and hope for more of the same.

Casey McGehee, 3B/1B, Miami Marlins (CBS: 17 per cent owned, ESPN: 9 per cent): There’s a reason we had McGehee among our Top 10 sleepers (and no, it’s not just because Tim loves anyone that plays in Japan). He’s done us proud early on as the clean-up hitter of a suddenly potent Marlin attack. How about 10 RBI in his first 20 at-bats of the season? McGehee has exhibited a superb batting eye early on and needs to be grabbed pronto.

Jared Cosart, SP, Houston Astros (CBS: 24 per cent owned, ESPN: 1 per cent): The swing and miss stuff has always been there. The control, not so much. If Cosart can stay away from the free passes he could be looking at a breakout campaign in 2014.

Dee Gordon, 2B/SS, Los Angeles Dodgers: Gordon was only slotted 35th in our Shortstop Rankings heading into the season, but Alex Guerrero’s defensive deficiencies opened the door for Gordon to grab the second base job for the Dodgers. Don’t expect any power from Gordon, but he’s got major speed and is playing like he doesn’t want to give the job back (1005 OPS through six games). Ride Gordon while you can, but know that he’s playing way over his head.

Charlie Blackmon, OF, Colorado Rockies (CBS: 7 per cent owned, ESPN: 3 per cent): Blackmon had a monster Friday, going 6-for-6 with four runs scored and five RBI. He followed that by going 3-for-4 with a stolen base on Saturday. If that doesn’t catch your attention, nothing will. For now, Blackmon has taken the lead role in the three-headed monster that is the Rockies’ CF gig.

Scott Kazmir, SP, Oakland Athletics: Kazmir, slotted within the Top 75 of our Starting Pitcher Rankings, is being counted on by the A’s to add veteran depth to a rotation hurt by offseason losses and spring injuries. So what’s he do in his debut Thursday? Oh, just toss seven shutout frames to help consolidate a great comeback season last year. Could Kazmir be the new ace of the A’s?

Travis Snider, OF, Pittsburgh Pirates: Slotted 116th in our Outfield Rankings, Snider has power, although we haven’t seen it much in recent years. He’s off to a nice start, seizing control of the Pirates’ RF gig by hitting safely in four straight, the last two of which have been multi-hit efforts. We’d like to see some extra-base sock, but for now, Snider could be a worth a look in NL-only leagues.

Nathan Eovaldi, SP, Miami Marlins (CBS: 43 per cent owned, ESPN: 5 per cent): The former Dodger top prospect is off to a great start with the high-flying Marlins. He who hesitates will not be owning him in 2014.

Yonder Alonso, 1B, San Diego Padres (CBS: 35 per cent owned, ESPN: 2 per cent): Injuries destroyed last year for Alonso, but all don’t forget that just two years ago when he hit 39 doubles. The upside is there if you’re looking for bench depth at the corner-infield position.

Abraham Almonte, OF, Seattle Mariners (CBS: 9 per cent owned, ESPN: 2 per cent): The new leadoff hitter in the revamped Mariners lineup has gotten off to a great start. In 21 at-bats, Almonte has hit one long ball with four RBI and chipped in with a stolen base. He’s a sneaky pick that could generate huge returns, even in shallow formats.

Tyler Skaggs, SP, Los Angeles Angels (CBS: 58 per cent owned, ESPN: 3 per cent): No. 8 on our Top 60 Prospects list just a year ago, Skaggs graduated to the bigs last year and now looks like he’s here to stay after breaking camp as the Angels’ No. 5 starter. Acquired from Arizona in a three-team deal this winter, he had his mechanics fixed, flashing higher velocity than ever this spring, helping secure his role. Skaggs won his debut Saturday with eight innings of four hit, one unearned run ball, fanning five and walking just one. If he can keep the free passes down (which has been his downfall in the past) he has the potential to be a solid acquisition in all formats.

Marcell Ozuna, OF, Miami Marlins (CBS: 26 per cent owned, ESPN: 12 per cent): Ozuna won the job in a close battle with Jake Marisnick this spring and, like so many of the Marlins, is off to a great start. Having an extra outfielder will be a good thing in 2014.

Yangervis Solarte, SS, New York Yankees (CBS: 10 per cent owned, ESPN: 2 per cent): Talk about coming out of nowhere. Who is Solarte and how the heck did he win the infield utility role over incumbent Eduardo Nunez? Solarte rode a great spring to a job, and is batting a ridiculous .538 so far after recording a third straight multi-hit effort on Saturday. He’s seen action at third and second so far, giving him a chance to qualify at three positions before long. Solarte doesn’t have much speed and even less power, but his contact skills are superb. Mark Teixeira is out indefinitely after hurting his hammy reaching down to pick up a foul ball (yes, Tex is that brittle now), forcing the Yankees to move Kelly Johnson to first base. As a result, playing time should not be an issue for at least the next several weeks as Solarte will share the hot corner with Dean Anna, while also likely seeing periodic action at second and short.

Chris Colabello, 1B, Minnesota Twins (CBS: 7 per cent owned, ESPN: 1 per cent): Three months ago, Colabello was in the process of being sold to a Korean team. Flash forward and he’s leading the Twins in RBI (seven). It’s a funny game, isn’t it?

Danny Espinosa, 2B, Washington Nationals (CBS: 3 per cent owned, ESPN: unowned) Ryan Zimmerman’s shoulder is acting up yet again. If he’s forced to miss any time, Anthony Rendon is likely to move to third base with former starter Espinosa filling in at second. Deeper NL-only league owners should be tracking this very closely.

The Chase for Saves

Matt Lindstrom, RP, Chicago White Sox (CBS: 38 per cent owned, ESPN: 31 per cent): Lindstrom has got the job, the question is can he hold it? Nate Jones is by far a better option and can’t be ruled out from getting a shot at the ninth inning gig once he’s healthy. We’d also keep an eye on young Daniel Webb. If this sounds like less than a ringing endorsement for Lindstrom, that’s because it is. Consider the vet a short-term option at best, and if he lasts longer, consider yourself lucky.

Jose Valverde, RP, New York Mets (CBS: 38 per cent owned, ESPN: 23 per cent): The Mets’ bullpen is an unmitigated disaster. Vic Black couldn’t find the strike zone this spring and was subsequently demoted. Bobby Parnell partially tore his right elbow MCL after one appearance. Yes, we know it’s Jose Valverde, but currently he’s the only answer in the ninth inning for the Mets.

Francisco Rodriguez, RP, Milwaukee Brewers (CBS: 46 per cent owned, ESPN: 57 per cent): K-Rod was inked in the offseason to act as the setup man for Jim Henderson, but with Hendo struggling in the preseason, Rodriguez broke camp as the closer. It’s déjà vu all over again in Milwaukee. Manager Ron Roenicke has said that long-term Henderson is going to be his guy (once he straightens out his game) so keep that in mind when tossing some cash K-Rod’s way this weekend.

Jonathan Broxton, RP, Cincinnati Reds (CBS: 22 per cent owned, ESPN: 1 per cent): J.J. Hoover destroyed his chances of holding onto the closer gig by totally imploding Saturday against the Mets. Broxton is slated to return from the DL Tuesday and according to Manager Bryan Price he will be anointed as the closer until the return of Aroldis Chapman. While everyone is chasing and paying for the higher profile guys, Broxton could be the safest and best bet of the bunch for at least the next 4-to-6 weeks.

Luke Gregerson, RP, Oakland Athletics (CBS: 14 per cent owned, ESPN: unowned): Jim Johnson took a loss and blown save in his first two appearances as the A’s closer. He’s received the traditional management vote of confidence (read: kiss of death), so don’t forget about Gregerson if you have the room for a cheap bench stash this week.

Antonio Bastardo, RP, Philadelphia Phillies (CBS: 6 per cent owned, ESPN: unowned): Jonathan Papelbon continues to suffer a drop in velocity. Given Pap’s bloated salary the leash is long, but if his struggles are prolonged, Bastardo could find himself working into the mix for saves in Philly.

Crave more in-depth Fantasy analysis? Then join us every Thursday at 9 p.m. EST for RotoRob’s Fantasy Baseball Weekly Podcast on Blogtalkradio as we entertain and edify you for an hour or more each week. This week, RotoRob will be joined by RotoRob.com MLB Editor Tim McLeod. Tune in here.