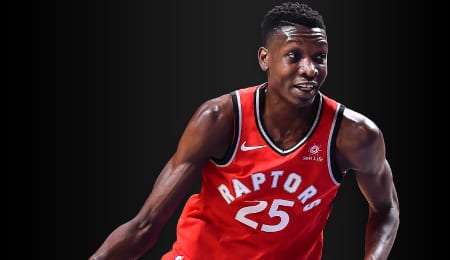 Chris Boucher is poised to get much more action. (Gore Mutual Insurance)

Welcome back to another week of Fantasy basketball. Christmas is coming next week, and that’s likely going to cause many owners to take their eyes off their rosters; use the opportunity to pounce and find yourself a new X-Mas gift on the wire.

This week, Gordon Hayward has suffered yet another injury, only this time it’s not serious; the Lakers have vowed to not lose consecutive games again this season; and Giannis Antetokounmpo nailed a career-high five treys to help the Bucks down the Lakers in a battle for NBA supremacy.

Chris Boucher, PF, Toronto Raptors (ESPN: 2.4 per cent; CBS: 16 per cent): A few weeks ago, we recommended Boucher, and while his ownership has risen since then, it’s about to soar with Marc Gasol, Pascal Siakam and Norman Powell all out. While Boucher is sure to be a healthy source of blocks for the next little while, he should be capable of providing some scoring, rebounding and three-point shooting to your team as well. In recent weeks, he hasn’t been seeing enough PT to help, but that is likely to change now. Boucher — who seems to understand his role (see video below) has been getting more touches this season, and with two of the Raptors’ big scorers out, he’s in line for a lot more in the coming weeks. The 2016 Pac-12 All-Conference honourable mention has a real chance now to make a name for himself at the NBA level, so grab him while you can.

Frank Ntilikina, PG, New York Knicks (ESPN: 0.6 per cent; CBS: 10 per cent): Ntilikina was ill earlier this week, but was able to suit up Friday, albeit playing limited muntues. Still, he has a chance to do well as long as Reggie Bullock remains out. After seeing a bit less PT as a sophomore, Ntilikina has seen a nice uptick in minutes this season, but his production has been inconsistent lately. Still, on Sunday he had 13 points, five boards, four assists and four steals in just 24 minutes, giving an indication of what he’s capable of if he can get at least 20 minutes per game on an ongoing basis. Obviously, until he’s getting 25 or more MPG, Ntilikina’s value is limited to deeper formats.

Cameron Johnson, SF, Phoenix Suns (ESPN: 1.1 per cent; CBS: 9 per cent): Johnson has been dealing with a hop injury, but returned Friday, although he didn’t see much PT. The rookie hasn’t set the world on fire yet, but he was starting to look much better before he got hurt, scoring 10 or more points in three of his last four games (potting nine in the other one), while chipping in with some decent rebounding numbers and the odd steal. The 11th overall pick in this year’s draft should be poised to make some nice strides in the second half, so consider him now in deeper leagues.

Rhys O’Brien was a Junior High school music teacher in West Islip, New York, and he released two singles in his career, the first of which was in 1967. Here’s the B-side of that effort, “Christmas Morning,” which we felt was appropriate this week. For your trivia buffs, this track was produced by the legendary Phil Ramone.