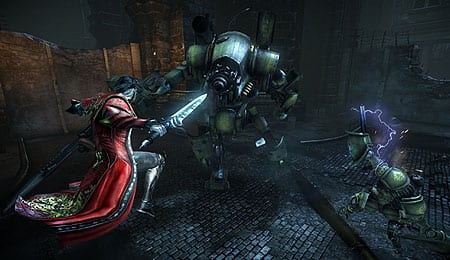 Dracula must watch out for Satan’s army of cyborgs. Yeah.

The original Castlevania: Lords of Shadow came as a bit of a surprise to series fans. The game, co-produced by Kojima Productions (Metal Gear Solid), was the latest stab at putting the series in a 3D space rather than traditional 2D platform like its successful DS titles. And while Mercury Steam’s title wasn’t perfect, it was a fun God of War-inspired bit of bonkers with a cliffhanger ending that demanded a sequel.

That sequel is here, and Castlevania: Lords of Shadow 2 throws a bunch of twists into the mix, both from a gameplay and a narrative perspective. You’re Dracula, you’re in the present (and the past), and you’re ready to kick ass… when you’re not hiding or running. If this sounds like a strange mixed bag, well, not all of the Mercury Steam’s innovations work, leaving LOS2 with a bit of an identity crisis.

Those familiar with the first game or God Of War-style games won’t have a problem with LOS2. The set up should be familiar, with standard big attack, range attack, jump, and interact buttons. The triggers handle dashes and special weapon-contextual moves, with L1 activating the Void Sword and R1 activating the Chaos Claws. In addition, the directional pad activates various special options, from the ability to possess people or change into a swarm of rats to using special power-boosting gems.

All of the controls work well and flow together. Movement is crisp and responsive. The problems come when other factors (enemy AI, camera angle) get in the way.

In terms of narrative, LOS2 tends to bounce between mythological fantasy and gritty modern time. There’s obviously a graphical disparity with this, but it’s not just because the environments change. The fantasy levels look fantastic, with epic touches and background details creating unique levels. Modern levels, though, look dank and limited, as if the game’s budget just ran out for these areas (this is entirely possible, as it’s only a 4 GB game, which is shockingly small for a AAA release). Corridors and industrial rooms appear as if they could have been lifted out of the original Killzone for PS2.

The original cast is back from the previous game, with Robert Carlyle as Gabriel/Dracula and Patrick Stewart as the magnificently named Zobek. Both sleepwalk through their roles, though Stewart’s sleepiest performance can infuse anything with dramatic urgency. Also, Game Of Thrones fans will recognize Richard Madden (AKA Robb Stark) playing a series regular. As with the first game, combat grunting and yelling sound nothing like Carlyle, creating a bit of a discrepancy when the game goes to cut scenes.

Everything starts out well for LOS2. A short tutorial section gives you a fully armed Dracula beating up enemies and scaling a titan while the environment around him falls apart or burns. This segues into a narrative segment that ties together the very loose canon of the series’ principal characters (Dracula, Trevor Belmont, Simon Belmont, and Alucard). If you’ve played the spin-off game Mirror Of Fate for the DS (Xbox/PS3 digital releases came later), LOS2 ties into that as well. Dracula then wakes up in the modern day, picking up where the first game left off, and one of the first things you’ll notice is a semi-open world environment based on the HUD.

At this point, the game seemed to purport that it would return to Metroidvania roots, only with the exploration in 3D with God Of War-style combat. This concept seemed like an excellent idea, but within half an hour, my hopes were dashed.

Instead, LOS2 breaks into two styles of gameplay. Through some narrative creativity, Dracula journeys to the past while exploring the present. Levels set in the past (well, a hyper-fantasized mythological version of the past) are very similar to gameplay from the first LOS. The present levels are where it falls apart, and it’s not just that the idea starts with Dracula using magic to break into Satan’s biotech company. Yes, you read that right.

It’s always good when sequels attempt to build on gameplay by adding new elements. Ubisoft’s Assassin’s Creed series is a prime example of this. However, LOS2’s new additions consist primarily of terribly conceived stealth sections. Avoiding Satan’s cyborg mech army (yes, you read that right) by hiding in the shadows probably never sounded good on paper, and in execution, it’s worse. These stealth sections are interspersed with “trapped in a room with respawning enemies” combat sections, and the guise of an open world is fairly limited, making modern sections a slog to get through.

While the fantasy levels are the best part of the game, they’re not perfect either. Combat can be hampered by difficult camera angles that zoom in too much or too out. Enemy strength and ability to block seem unbalanced, and a lack of enemy variety — a problem with the first game — creates pacing issues. LOS2’s platforming sections are also just plain not fun, including attempts for Uncharted-style “run for your life” sections. LOS2 doesn’t really allow you to grab onto whatever you want, and instead, forces jumps and holds to take place at very specific circles and points. This creates a huge problem when enemies are swarming or the camera isn’t working with you, though thankfully Mercury Steam allowed several highlight options to move things along.

Castlevania: Lords Of Shadow 2 is a blown opportunity. The gameplay takes significant risks, but not much of it pays off, making a large chunk of the game just mediocre. When it shines, it provides fluid and brutal combat with creative weapon options. When it bogs down, though, the game loses all momentum and becomes frustrating or worse, boring. Longtime series fans will want to dip in to see how this creative take on series canon plays out, but gamers that simply enjoy the action-combat might want to revisit the last Devil May Cry instead.

One minor graphical annoyance: much of the game’s text is in Old English font, which makes it pretty much impossible to easily read. If you’re stuck with a smaller TV, this will prove to be particularly irritating.