The Wire Troll: Carlo Colaiacovo Producing for the Blues 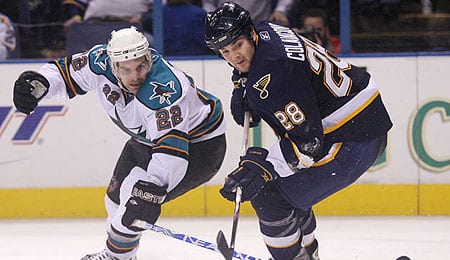 Carlo Colaiacovo (right) has been racking up the helpers for the Blues.

Did you ever have the feeling that January really is just “one of those months?” This is the time of year where Fantasy thoughts turn into the classic “oh, who is hurt now?” scenario. If you don’t think so, then think again. When you recall some of the more recent injuries, they really do have Fantasy GMs scrambling for viable alternatives. More importantly, it’s not the number of injuries, it is the injury that affects your team.

This goes out to anyone who has Mike Green on their roster: acquire someone else as soon as possible. When a player just becomes this injury prone (and now it’s a chronic groin issue), it is just time. So if you are dying from defensive breakdowns on your Fantasy team, we are going to try and give you a few options this week for a quick fix and one that may be a little longer term.

Corey Potter, D, Edmonton Oilers: Edmonton may have quite a few key injuries (including Ryan-Nugent Hopkins, Ryan Whitney, Cam Barker and Tom Gilbert) but it is happy to have Potter back. While he only had 14 points in 27 games on the season, he does have that ability to set up players very well. Considering potter has five points in his last seven games, he is definitely worth a late look once again. Yes, Potter’s -10 ranking is a bit of a concern, but with the injury to Whitney a major concern, he should reap the rewards as the Oilers’ top defenseman. It will be interesting to see how Potter fares over the next several weeks as Edmonton will be without Nugent-Hopkins and maybe Jordan Eberle as well. By the way, Potter is only owned in 10-to-15 per cent of Fantasy leagues.

Carlo Colaiacovo, D, St. Louis Blues: It is always tough to gauge players, but we had a feeling that Colaiacovo was going to be a perfect fit for a Ken Hitchcock-coached team. The defenseman has 13 assists and 14 points in just 28 games this season, which works out to a point every other game. That is not all that bad, to be honest. If he can stay healthy — and that is a big if, in his case — Colaiacovo can be a nice short-term replacement if you are looking for a few assists from the back end. Yes, there is risk but then again, options are few and far between. With a Colaiacovo currently at a 10 per cent ownership rate, there are worse gambles that could be made.

Jay Harrison, D, Carolina Hurricanes: Another ex-Leaf blueliner, Harrison has been a nice surprise with 15 points in 33 games for Carolina. He possesses an above average slapper and has an offensive presence on the man advantage which the Hurricanes desperately needed with the departures of Tomas Kaberle and Joe Corvo. If the top forward lines ever develop some chemistry, Harrison might even be able to generate more than a half point per game. He is only owned in less than 5 per cent of all Fantasy leagues, so get on board while you can. The reality is offensive defenseman options are scarce on the waiver wire these days.

That is it for this week, ladies and gentlemen. Next week, we will help you with your offensive injury woes. In the meantime, good luck to all our readers.